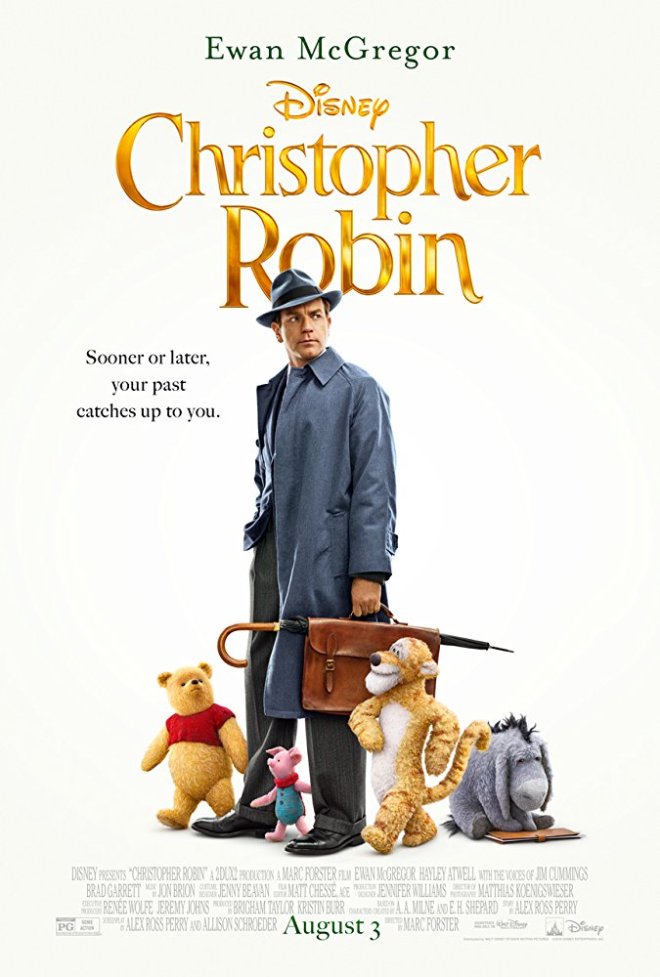 After leaving Hundred Acre Wood and becoming an adult, Christopher Robin has lost his imagination and must look to Winnie the Pooh and the rest of his friends to get it back.

NO SPOILERS AHEAD, JUST HONEY…NOPE THAT’S GONE TOO

This movie was adorable.  It really was. When I first saw the trailer for CHRISTOPHER ROBIN I thought it looked more like the movie HOOK, where Peter Pan grows up and goes back to Neverland as an adult, then has to remember how to be The Pan again.  I’m not going to lie, CHRISTOPHER ROBIN is very similar to that, but its story does something that HOOK didn’t do for me, and that is capture my heart. (I’ll pause for your “AWWW”) lol. I don’t want to get all sobby…and I assure you, a “man” is writing this review, but I was shocked by how much I reverted back to being a kid again when I saw a live action Winnie the Pooh, Tigger, Eeyore, Piglet, Kanga and Roo.  NOTICE: I’m not mentioning Rabbit or Owl and that’s not because I don’t like them or that there’s something wrong with their characters..far from it. But the main reason is because their characters were CGI’d more realistically, while the others were made to look like stuffed animals. AND THERE IT IS!!! That is why I was a kid again. I saw my old friends that I used to play with and go on my own adventures with in my old bedroom growing up and in car rides with my mom to the store.  Now they were on the big screen and they were talking out loud for the first time, and to be honest, I was hanging on to their every word.  My two favorite things I loved about this movie and that stand out for me are 1.) Winnie the Pooh. OMG, every time he talks you want to either cry tears of joy or tears of sadness.  The bear is constantly BOTH sweet and sad at the SAME time. I didn’t even know that was possible. Every scene he’s in reminds the viewing audience about the theme of CHRISTOPHER ROBIN, which is to take life one day at a time and live each one with as much joy, love and laughter as possible.  I’m telling you, this movie got to me. And a man is still writing this…lol. The second thing that stands out and that I absolutely positively love about this movie is…seeing a furry stuffed bear, eating honey. I don’t know why this is, but it is hilarious to see. Pooh is constantly eating throughout this film and just like a normal stuffed animal, it gets everywhere.  Makes me laugh, I can’t explain it. LOL. So in conclusion, go see CHRISTOPHER ROBIN in theaters it’s worth your ticket money. Go be a kid again. Even if it’s just for a short moment. Until next time, thanks for reading.

P.S. – Don’t leave right away because there is a scene that plays during the credits that you won’t want to miss!

P.S.S. – The Winnie the Pooh stuffed Bear market is going to EXPLODE after this film.  LMAO.

When we meet Christopher Robin (Ewan McGregor) this time around, he is all grown up, with a beautiful wife (Hayley Atwell) and daughter Madeline (Bronte Carmichael) by his side, who both want nothing more than to have more of his time…

As we find many times in our adult lives, it seems that our careers, and the pressures that they force upon us, tend to totally consume our lives, and for Christopher Robin, his life is no exception…

But when a dear friend from his past suddenly appears, it seems that Christopher Robin is going to have to readjust his life ~ to not only to save his present family ~ but to save his friends from his childhood too, who are somewhere hidden amongst the Hundred Acre Woods…

I give CHRISTOPHER ROBIN a rating between MUST SEE ON THE BIG SCREEN and WAIT AND CATCH THIS FILM ON DVD:  As sweet and endearing as it gets, CHRISTOPHER ROBIN brings to life the magical characters from our childhood ~ as Pooh, Eeyore, Tigger and the gang find that their existence in this world is just as important in Christopher Robins adult life, as they were in his childhood.  McGregor is superb playing the man struggling through life…trying to keep everyone happy along the way, added with the perfectly voiced characters from our childhood – including Jim Cummings as POOH/TIGGER, and Brad Garrett as EEYORE, and you have a film that conjures up all those feelings you felt when you first saw Disney’s Animated version of WINNIE THE POOH.  Add in the adorable Bronte Carmichael playing Christopher Robin’s daughter, and you have one enchanting and magical film that will not only make you smile, but will bring a tear to your eye along the way too!  I was so happy that I got to view this film with children in the audience as well, as their reactions throughout, made this film even more enjoyable to view J So, with all these accolades, why am I not giving this film my best rating?  Well, for starters, even though I loved the storyline, and the characters throughout, there are parts of this film that played out way tooooo slow for me, giving it an EEYORISH vibe that even seemed to make it hard for some of the children in the theater to stay engaged too, with what was happening on screen.  But I must state too, that once what was happening with the characters sped up, the children were totally engaged with this live version of our favorite pooh bear, and all of his friends as well.  So, if you are wanting to see a film this weekend that is perfectly suited for the entire family, then please, by all means, head out to a theater near you and catch CHRISTOPHER ROBIN.  But, if you are thinking that you might want to wait and catch this film at home on DVD, you will be alright waiting to view it that way too…and still enjoy all of its endearing qualities…and whether you see it on the big screen, or at home, make sure to stay for the credits, and there is an ending scene, you don’t want to miss …