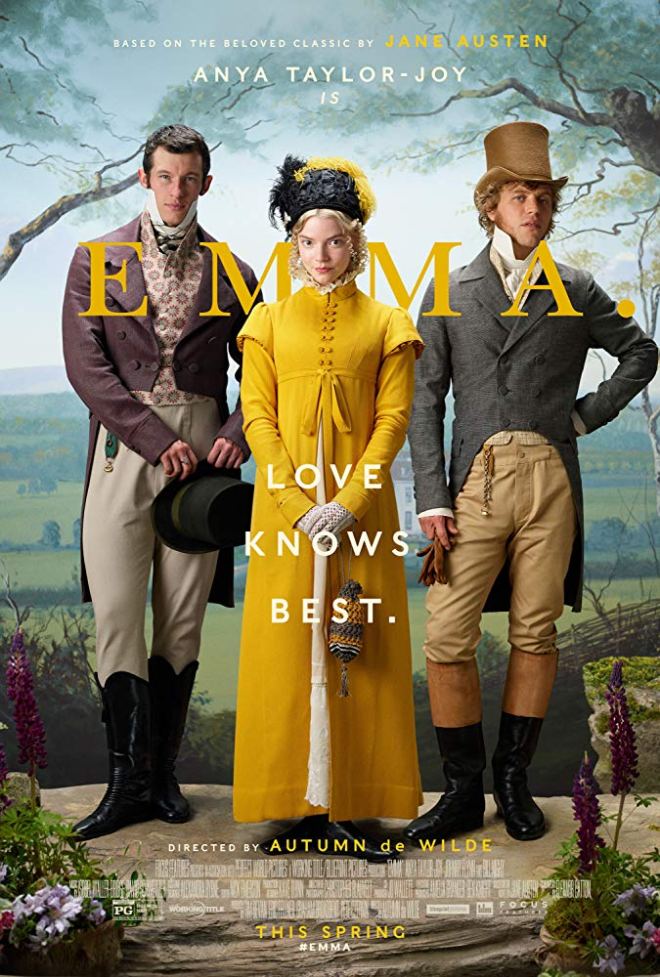 WRITERS:  Based on the Novel by Jane Austen, Screenplay by Eleanor Catton

As we watch mesmerized as Jane Austen’s beloved comedy classic, about love, finding your equal, and of course your very own “happy ending” too, we meet the beautiful, clever and ever so rich young Emma (Anya Taylor-Joy), as she fancies herself as a formidable match-maker, sticking her nose in everyone else’s business, instead of showing the same focus and dedication to her own affairs…

But, as Miss-meddling Emma soon comes to find, your social class, and the luxuries it brings your way, are no match for the loss of friends your inappropriate responses may bring upon you, nor does it feel good when you realize the love of your life that you have been in search of for quite some time, may have been right under your nose, the entire time…

I give EMMA a rating of MUST SEE ON THE BIG SCREEN!  Even though we have been privy to this 18th century comedic masterpiece being brought to both the big and small screens before ~ whether you caught the 1996 Miramax film starring Gwyneth Paltrow Tony Collette, Ewan McGregor and  Jeremy Northram, or the 1996 TV version of Jane Austen’s Novel, starring the exquisite Kate Beckinsale, Samantha Morton and Mark Strong as Mr. Knightley ~ it seems that the casting of this latest remake banked on a lot less on such a star-studded cast, and more on the beauty of the storyline, the ambiance of the century in which it unfolds, and the heart felt realism of a young lady, trying to find her way in the world.  And even though this latest creation does start out a little bit slow, it doesn’t take long till everything about the film begins to mesmerize you, as you find yourself enthralled within its playful banter and its blissful feel, as you are trust into the world of a young woman, who fells no remorse for forcing her views about life upon those who she supposedly cares about!  This new version does also manage to cast some rather handsome gentleman that aren’t too hard on the eyes either, as whether you are drawn to manly good looks of Englishman Johnny Flynn, playing the role of George Knightley, or the ultimately charming and gorgeous Callum Turner, who was tagged to play Emma’s love interest Frank Churchill, this rendition of Jane Austen’s masterpiece, brought to life by Director Autumn de Wilde, definitely has a women’s vision at hand, that you cannot deny.  This film will manage to touch the heart of any and every lady that views it, as its beautifully orchestrated storyline plays out throughout every inch of this film,  bringing to the surface every young girls dream… that of finding her one true love, and living her life with him by her side…alas, Happily Ever After!