Kathy vs. Tony’s view of LUCY IN THE SKY – Rated R

This review is brought to you by Kathy Kaiser & Tony Mosello 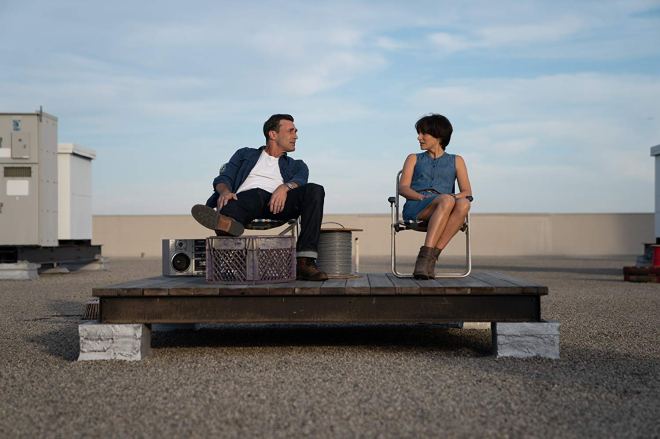 Loosely based on the real-life story of former Astronaut Lisa Nowak ~ Lucy in the Sky takes us on a journey into the life of Astronaut Lucy Cola (Natalie Portman), as she ventures into space and is mesmerized not only by its beauty, but by all of her out-of-this world experiences.  Now, back on earth, Lucy finds herself struggling with her mundane existence with husband Drew (Dan Stevens), and the unexpected landing of her niece Blue Iris (Pearl Amanda Dickson) on her doorstep, while she was away.  Longing to return to space, and to jumpstart her love life too, Lucy goes into hyper speed, preparing for her next launch, both mentally and physically, while starting an affair with fellow Astronaut Mark Goodwin (Jon Hamm).  As Lucy struggles, her always supportive Mother, Nana Holbrook (Ellen Burstyn), is once again rooting her on…Not seeing that Lucy is struggling at every turn, whether it is in raising her teenage niece, or brushing off all the realities of life, as she continues to spiral, out of control…

I give LUCY IN THE SKY a rating between MUST SEE ON THE BIG SCREEN and WAIT AND CATCH THIS FILM ON DVD OR NETFLIX!  If you love Natalie Portman, and her acting prowess, then you are going to want to head out to a theater near you to catch this performance on the big screen too.  But, keep in mind that even though her performance throughout this film is good, it’s not her best work to date.  I wish that Hawley would have let her scrap the Southern accent throughout this performance too, as for me, it just took away from seriousness of the mentally deranged aspects of her character throughout this film.  Hamm once again is typecast in the “bad boy role” of using, abusing and playing games with women, but I guess if your good at playing something, why not continue…and I was saddened too, by the total lack of chemistry between Portman and Stevens, as the only bonding experiences that played out on film, was the mere fact that they cohabitate together.  But, on the flip side of the equation, I think that LUCY IN THE SKY did have a few intellectually stimulating messages too, causing me to stop and think about all the different aspects of life that encompass any woman’s existence, and how hard it can be to navigate them all, both personally, and professionally.  Rounding out the cast throughout this film were good performances by veteran Ellen Burstyn and another small, but pivotal role again this time around for Zazie Beetz (you can catch her presently too in another small, but pivotal role in JOKER), and I can’t help but wonder, if the translation of this film onto the big screen may have been better handled by a woman Director?  I don’t mean for that to come across in a sexist way, I just felt that the second half of this film, which takes Portman’s character into the oblivion mentally, might have been better translated, adding to the film as a whole, from a women’s perspective, rather than the crushing frame after frame of abrash craziness, that makes it onto the screen.  All-in all, LUCY IN THE SKY definitely had all the perfect elements in place for this film to become something absolutely spectacular, it just sadly couldn’t find the centrical force it needed, to knock it into the stratosphere…

This Review brought to you by Tony Mosello ~

How Does it Feel to be Home?

In 2007, headlines were dominated by an interesting love triangle involving multiple NASA astronauts. “Lucy in the Sky” recounts the events that transpired in a brand new story, beginning as internally-motivated Lucy (Natalie Portman) arrives back on Earth following her trip to space. Suffering to find her footing back on the ground, she finds herself lost and searching for something; longing to return to space where things seemed much simpler. During her struggles, she sparks an affair with a fellow astronaut named Mark (Jon Hamm), feeling seemingly-indifferent to the hurt she may cause her husband (Dan Stevens).

As Lucy begins to spiral out-of-control, she is left searching for her true self;
falling for Mark and distancing herself from her husband. As she learns the feeling may not be mutual and Mark entangles with another astronaut (Zazie Beetz), Lucy can only think of one solution.

It’s always refreshing to see Natalie Portman on the screen and she finds herself back in space this time around. Her performance is crucial to the film, as she commands the screen as we watch her descend into nothing. The surrounding cast features Hamm, Beetz, Stevens (in one of the most bizarre and poorly-casted roles of his career), Pearl Amanda Dickson, Ellen Burstyn, Tig Notaro, and Jeffrey Donovan; given this group I thoroughly expected more from them but the script held them back immensely. While focusing around NASA, “Lucy in the Sky” is hardly a space movie, which isn’t a bad characteristic. Rather than focus on the mission and the dealings in space, the film follows an astronaut’s life after they come back; their mental state, their family life, and their adjustment. The film starts out promising, but quickly deteriorates as it becomes a run-of-the-mill after school special.

Distinctly different from the real-life story, “Lucy in the Sky” takes many artistic liberties to build its story; including that of female harassment. Lucy suffers multiple instances of belittling and her tragicdownfall is ultimately sparked by a man taking advantage of her mental state, but instead of subtlety proving a point, the director chooses to bash you in the face with this plot point. One can’t help but wonder how much better this film would have been if it was told by a woman (which is shocking as even Reese Witherspoon is listed as an executive producer). Meanwhile, as what I can only imagine is a link to her fragile mentality, the film’s editing features distracted filmmaking techniques with multiple image-breaks and whispering dialogue that only serve to irritate the viewer. The film also could have largely benefited from having 30 minutes or so cut from its 124 minute running time, as it would have led to a cleaner, less jumbled mess. Portman firmly gives it her all, but even that can’t save “Lucy in the Sky” from becoming one of the year’s most forgettable films.