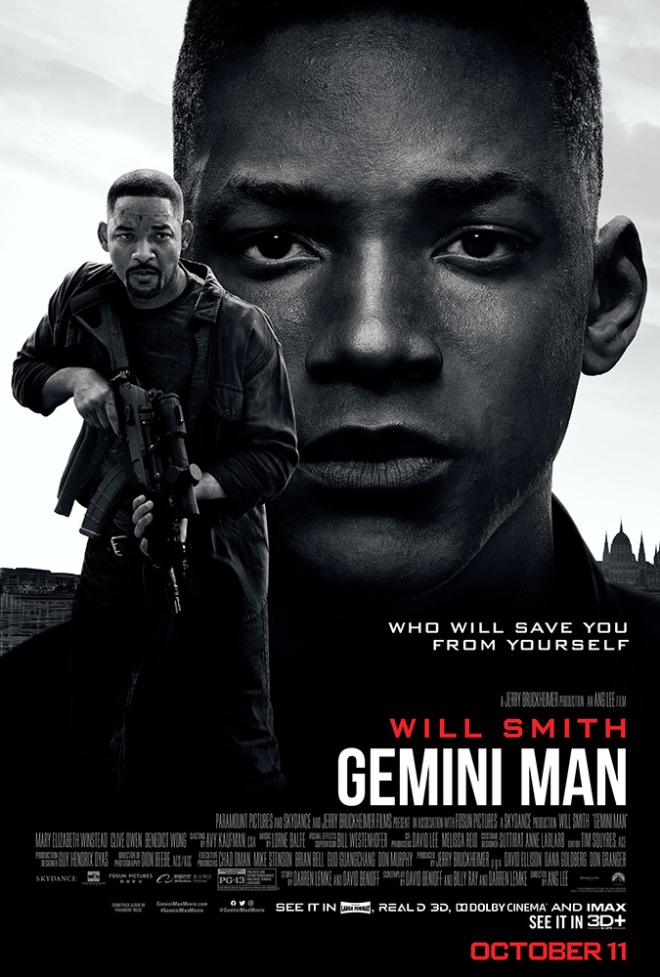 The review is brought to you by Kathy Kaiser

He can still do an action film at the ripe out age of 51 ~ which is referenced many times throughout Ang Lee’s latest creation ~ as we meet soon to be ex-assassin Henry Bogan (Will Smith), when he decides now is the perfect time to venture into a more normal existence , while he still can.  But wait, not so fast there, as now it seems that someone has sent a killer to take Henry out before he gets the chance to retire, and he seems to look very familiar to him, to say the least.  Now, as Bogan, and his new partner Danny Zakarweski (Mary Elizabeth Winstead) are forced to join forces to stay alive, they must also find out quickly if they can, who this clone is, and where did he come from…

I give GEMINI MAN a rating of WAIT AND CATCH THIS FILM ON DVD or NETFLIX!    Wow, how it pains me to not be telling you to head out to a theater near you this weekend to catch Ang Lee’s latest creation, but boy, or boy, did this one miss the mark on soooo many levels.  Don’t get me wrong, Smith is his usual charismatic self, and yes, he does still have “the stuff” to pull off any action-packed thriller.  But, sadly, even Smith couldn’t keep this film from hitting a nosedive or two along the way with its subpar storyline, and even greater subpar CGI and age regression imaging throughout.  I mean, going into this script, Lee knew that creating a younger Will Smith was vital to making this concept work, and why his team didn’t focus more time, or money, on making sure that that part of the film was flawless, I haven’t got a clue.  I also wasn’t blown away by the chemistry between Will Smith’s character, and Mary Elizabeth Winstead’s character either, as I think if we could have mustered a true chemistry, either professionally or personally throughout this film for these two lead characters, it might have helped save a few scenes along the way.  Is this the most torturous film I’ve had to sit through all year, absolutely not, but did the GEMINI MAN end up turning out to be everything it could have been, well, sadly the answer is NO there too…leaving me to suggest that you just wait to catch GEMINI MAN on your small screen at home once it pops on DVD or NETFLIX, saving you some money, and hopefully making the subpar CGI issues not so obvious, making viewing this one a little better, when it’s all said and done…