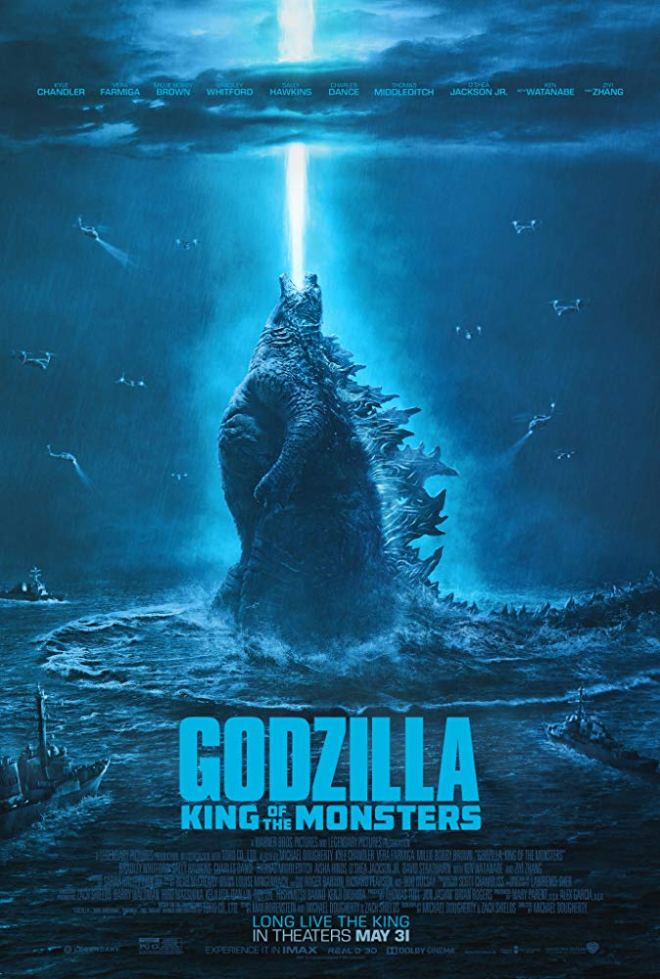 The crypto-zoological agency Monarch faces off against a battery of god-sized monsters, including the mighty Godzilla, who collides with Mothra, Rodan, and his ultimate nemesis, the three-headed King Ghidorah.

Alright, just in case you didn’t know…GODZILLA: KING OF THE MONSTERS is the third movie in a new monster franchise that was started back in 2014 with the Gareth Edwards directed film, GODZILLA starring Bryan Cranston, Aaron Taylor-Johnson and Elizabeth Olsen.  The franchise’s second movie that followed was in 2017 entitled KONG: SKULL ISLAND and that movie starred Samuel L. Jackson, Tom Hiddleston and Brie Larson. All caught up? Good. Now we can talk about GODZILLA: KING OF THE MONSTERS. This was a pretty decent movie.  Great cast. Great director. My only issue with it, is the story. The story this time around fell short of the finish line for me. Monster movies are tricky movies to do in my opinion and here are a couple of reasons why. First, they usually have to combine the human element with the giant monster element and this is very difficult because we are insignificant to these beasts.  The first two movies in this franchise did a good job of including humans in the story by having the humans try to either chase the monsters down, kill the monsters or help the monsters accomplish some sort of goal they were attempting. This time around with GODZILLA: KING OF THE MONSTERS our humans are now trying to do too much and that takes away from both the characters development and the real reason why the audience is there to begin with and that is…GIANT MONSTERS FIGHTING EACH OTHER!!!  Which now brings me to another reason monster movies are tricky. They need to have a great amount of monsters fighting one another. I didn’t come to see some random person running for their life from Godzilla while he’s fighting one of his iconic movie monster villains. I don’t want to see the fight from an upward angle like I’m there at their feet while they’re fighting. I want a long wide shot of these two big bastards duking it out just like I remembered seeing when I was younger. That is the whole point of this movie, right?  Now, all this being said – I did enjoy the movie even though the story wasn’t up to par. The special effects are great and the cast did as good of a job as they could, given the script they had. My suggestion is if you have seen and enjoyed both GODZILLA & KONG: SKULL ISLAND, then go to the theaters and buy a ticket to see GODZILLA: KING OF THE MONSTERS because they are just finishing post production on the fourth installment of this franchise called, GODZILLA VS. KONG. I wonder what it’s going to be about, hmmm? LOL. Until next time, thanks for reading.

P.S. – There is one post credit scene at the end of the credits, so stick around.  Oh, and pay attention to the news clippings during the beginning of the credits rolling because they also tell you a story.