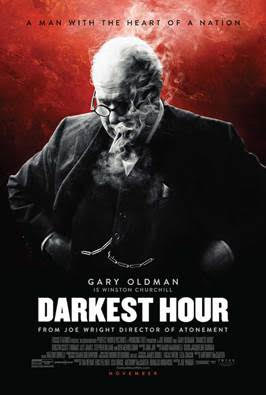 As we venture back into World War II, we come face to face with the gruff, and rather discontented with life, newly appointed Prime Minister of England, Winston Churchill (Gary Oldman).  Torn on whether to follow the advisement of his fellow parliamentarians, and attempt to negotiate a seas fire with Hitler, or following his gut in dealing with this mad man…and try to annihilate him, Churchill must face down his opponents, including the King of England…when he decides to keep fighting the good fight against this traitor who wants to destroy his beloved country…

I give DARKEST HOUR a rating of MUST SEE ON THE BIG SCREEN:  Writer Anthony McCarten’s take of the man, the legend, Winston Churchill is one that everyone must see, and there really is no other way to experience this incredible film, than at a theater near you.  Oldman should be raking in the accolades come awards season as the forerunner in this year’s race, because in my estimation, no one can hold a candle to his portrayal of Prime Minister Churchill! I mean, you don’t even recognize that it’s Oldman at all throughout any inch of this film, his portrayal is just that good!  James is perfectly cast too as Churchill’s devoted assistant, and Thomas Scott is enjoyable to view as well, playing Churchill’s spunky, yet very devoted wife.  Mendelsohn is even perfectly cast as King George VI, bringing me to suggest that before awards season is in full swing, you have to set a date to see this vastly moving, and superbly made film.  Make no mistake, if you love history played out on screen that leaves a lasting impression throughout each and every seen along the way, then rush out to a theater near you and catch DARKEST HOUR.  You really have to see Oldman in action…before he’s walking home with his Golden Globe and/or Oscar!