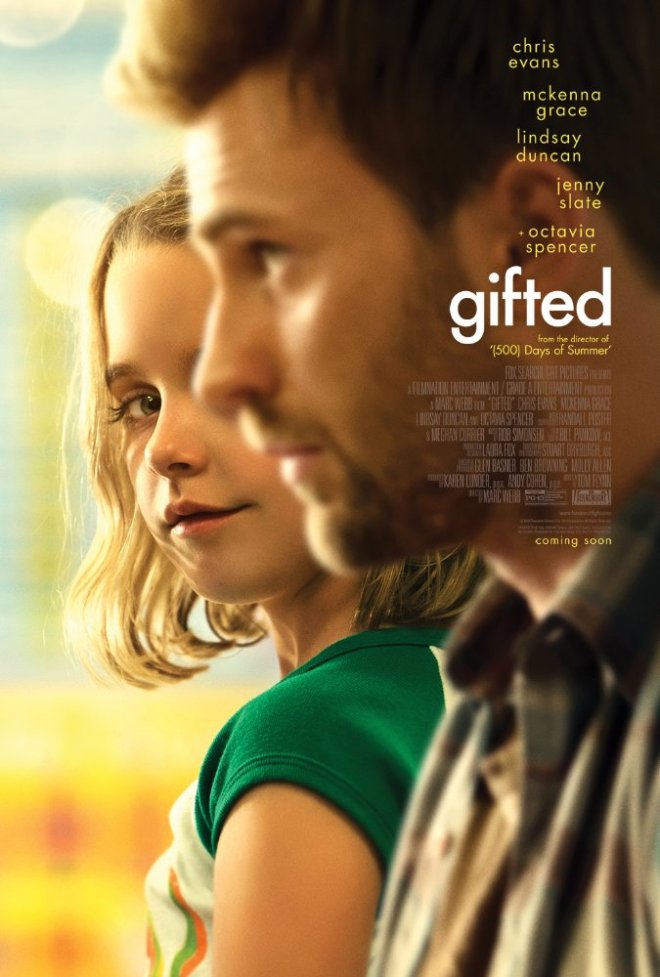 “Evans performance definitely garners him the distinction of FATHER OF THE YEAR with this film!” – Matinee Chat with Kathy Kaiser

From the Director who brought us the romantic comedy 500 HUNDRED DAYS OF SUMMER, and THE AMAZING SPIDER MAN 1 & 2 – Marc Webb – comes the tale of a devoted uncle, an extremely gifted child, and a world and grandmother who believe they truly know “what’s best for her”…this is GIFTED!!!

Raising his sister’s child since infancy, we meet “uncle extraordinaire” Frank Adler (Chris Evans), as he attempts to do what is best for his extremely gifted niece Mary (Mckenna Grace). After evaluating her home schooling thus far, Frank decides its time for Mary to attend public school, and its socially abundant setting, because even though Mary is brilliant, her socialization with others takes a lot to be desired, and she could definitely us some friends “her own age”…

Amazed at the genius of her new student, and her very abrasive attitude too, teacher Ms. Bonnie (Jenny Slate) discusses these issues with Frank, and her principal too, hoping to get Mary into the type of environment that will challenge her mind. When Grandma Evelyn (Lindsay Duncan) gets notice of Mary, and her whereabouts, it doesn’t take long for her to arrive, and attempt to get Mary into the proper schooling, and the right guardianship too…with her!

As good friend and neighbor Roberta (Octavia Spencer) tries to support Frank, and his attempt to raise Mary as “a normal kid”, it seems that Grandma, the school system, and the judge have other thoughts in mind for Mary – questioning not only Frank’s parenting style, but his less than stellar job, and unacceptable home life too, which apparently is holding Mary back from reaching “her full potential”…

I rate the film GIFTED a MUST SEE ON THE BIG SCREEN!!! Evans is perfect as the uncle who only wants what’s best for his niece, and is willing to do whatever it takes to do what’s right! And as a father figure for her too – he definitely garners my vote for “FATHER OF THE YEAR”! Grace is extraordinary as well, playing the young genius Mary. Her performance is truly incredible, and here’s to hoping they remember this child and her stellar performance come awards season this year. And kudos to the casting agent on this film too – as Duncan, Slate and Spencer are all perfectly cast in their respective roles throughout this film as well. If you love family dramas, and want to catch “Captain America” in one of his best dramatic performances to date, then grab the entire family this holiday weekend and go check out GIFTED at a theater near you. It’s one of those heart-warming one minute, heart-wrenching the next films that you definitely don’t want to miss!!!