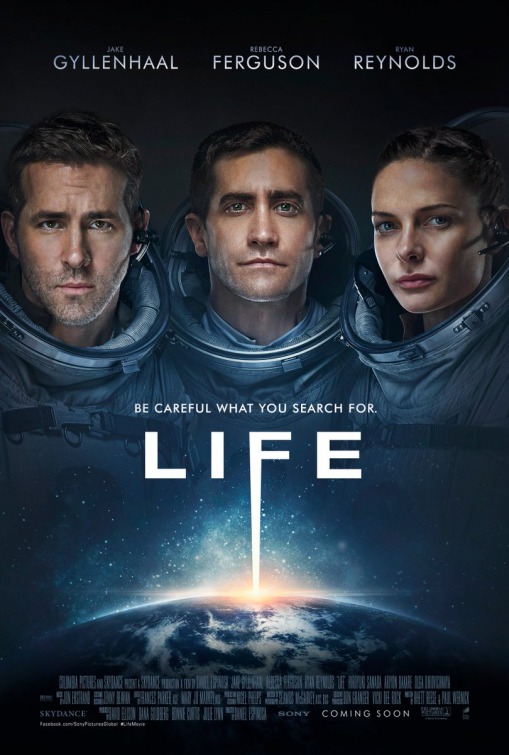 From Writers Rhett Reese and Paul Wernick ~ the genius storytellers behind ZOMBIELAND, DEADPOOL, and apparently DEADPOOL 2 too…comes a storyline that we all hope is fictional, and stays OUT OF THIS WORLD…this is LIFE!!!

When Derry decides to find out if the one-cell organisms they have retrieved are alive or dead, no one anticipates the incredible LIFE form that evolves from just a dash of glucose and a blast of oxygen.

Intrigued by how fast this creature they have made is growing, our team watches in anticipation ~ which quickly turns to horror ~ as what our scientists have created is definitely from outer space…hell bent on not only killing everyone aboard the space station, but finding a way to get to Earth, so it can continue its demise of every living creature it comes in contact with…

I give LIFE a rating between MUST SEE ON THE BIG SCREEN and WAIT AND CATCH THIS FILM ON DVD. Even though the cinematography is spectacular, which is a must for me…and the blues eyes of Reynolds and Gyllenhaal kept my attention the whole time too, the premise of this film has a feeling of “been there, experienced that” the whole way through too. I mean, the storyline itself, and the awesome acting by everyone involved will definitely keep you on the edge of your seat, and for some, the fact that it has a closer resemblance to GRAVITY than it does to ALIEN, might be a good thing as well, as I kept waiting for the evolution of this film to head into a REALLY SCARY realm, but it never did. So, if you love space, microorganisms and incredible blue eyes – he he – then you will definitely want to catch LIFE on the big screen this weekend. But if creepy things freak you out, and you don’t usually enjoy storylines set in deep space, then you might just want to wait and catch this film, on the smaller screen, when it comes on out DVD!