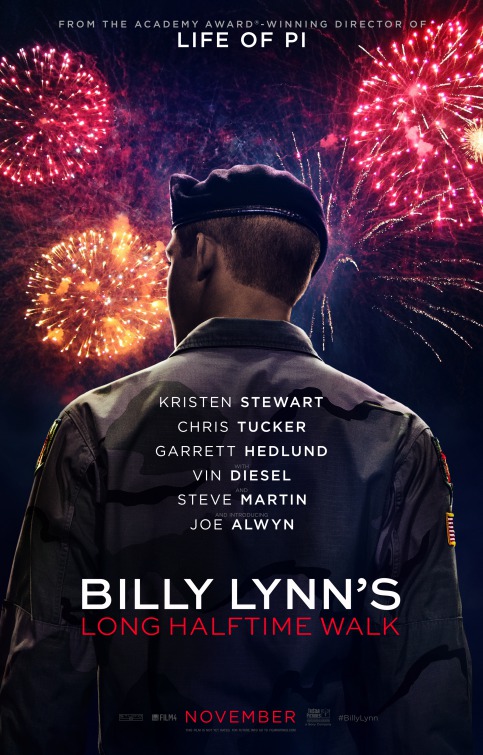 Based on the best-selling novel by Ben Fountain, and brought to the big screen by 2-time academy award winning Director Ang Lee, we meet Iraqi War Hero Billy Lynn (Joe Alwyn), who is in the thralls of a victory tour here back home, with his fellow BRAVO squadron soldiers by his side.

As Billy and his fellow soldiers try to make the most of their time amidst a Dallas Cowboys game and halftime show, Billy’s sister Kathryn (Kristen Stewart) is determined to find a way to save her brother from going back to war.

When owner Norm (Steve Martin) comes up with an ingenious idea to make BRAVO’s time in Iraq into a movie, the team is torn between telling their story in an attempt to make the “Big Bucks”, or returning to the front lines for another tour, which is where they all know they belong.

As Billy takes part in this halftime extravaganza, his mind fights between the harsh realities of war, and the pomp and circumstance afforded them here at home, as they are praised as HEROS…

I give BILLY LYNN’S LONG HALFTIME WALK a rating between MUST SEE ON THE BIG SCREEN and WAIT AND CATCH THIS ONE ON DVD ~ Alwyn is good as Billy, struggling to get beyond the apparent PTSD he is suffering from all along the way. And the glimpses of Martin and Diesel add depth to this movie, and make for good offshoots of the main storyline too. But as a whole, Ang’s new film missed the mark for me as a definite MUST SEE.  Maybe I was expecting too much from Ang, as his previous films were so extraordinarily beautiful and complex. Maybe I was expecting more from this storyline too, as I kept waiting for that memorable scene, or standout character that, for me, just never materialized.  All in all, BILLY LYNN’s LONG HALFTIME WALK was enjoyable entertainment to view…it just wasn’t an incredibly extraordinary film compelling me to send you racing to a theater near you this weekend.  If you want to catch it at the theater, go right ahead, but if you want to wait and catch it in a few weeks on DVD, that will work too.