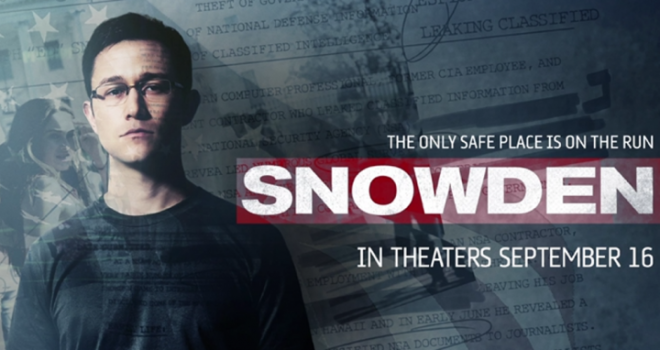 “Terrorism is just an excuse”

As we meet super-intelligent computer operations professional Edward Joseph Snowden (Joseph Gordon-Levitt), he has just taken a job with the CIA working on NSA programming.

Intrigued by the ins and outs of the programs and software being installed to track terrorists since the 9/11 attack on our country, Snowden feels that this new position will help him to fulfill his lifelong plan of serving our country, since being forced to leave the Army for health reasons.

Engrossed in his work, and this adorable new friend he’s met named Lindsay (Shailene Woodley), it seems that all is finally right in his world.

That is, until Snowden finds that the type of surveillance they are now performing, isn’t just on the BAD GUYS anymore, but on the AVERAGE JOE, who might just be reaching out to his neighbor next door.

As one position after another leads Snowden deeper down the path of espionage against his fellow man, he can’t help but shake his discontentment with what feels like a violation of everyone’s 4th amendment rights…

When the latest program Snowden is asked to develop for the NSA takes mass surveillance totally over the line, he decides that he must stop this continuous invasion of privacy by disclosing the existence of said programs, and the information they possess, by leaking it to the press.

Labeled a spy and a traitor to our country, as espionage charges are brought up against him via our federal government, Snowden is left with no choice than to seek asylum in a foreign country to save his own skin. When Russia steps forward to lend him a helping hand, Snowden has to head across the big pond and seek refuge in this foreign land, if he wants to save his own skin…

I give SNOWDEN a rating between MUST SEE ON THE BIG SCREEN and WAIT AND CATCH THIS ONE ON DVD. Gordon-Levitt’s portrayal of Snowden is dead on, which you can confirm personally at the end of this film. I was also very intrigued to view that the liberal Oliver Stone, who once again finds himself in the Directors chair, made a point to bring a little conservatism to this true life storyline, staying true to Snowden’s ideals and reasoning behind what he thought he needed to do to save his fellow man, and their 4th amendment rights. Stone even goes as far as dogging our present administration for the inappropriate surveillance they instructed to be upheld, until Snowden blew the whistle on them all. So why the in between rating you ask? Because parts of this film move at a snail’s pace, usually when we switch gears from the intrigue and suspense, and focus on the dysfunctional relationship between Snowden and his girlfriend. I wish they would have removed a lot of that sidebar storyline, and focused more on the actual problem at hand. I also wish that they would have gone into more detail about Snowden’s disclosure to the press ~ as it’s in there ~ but it seems like that part of the storyline is just an afterthought too, when in actuality, it should have been a major focus for this film.