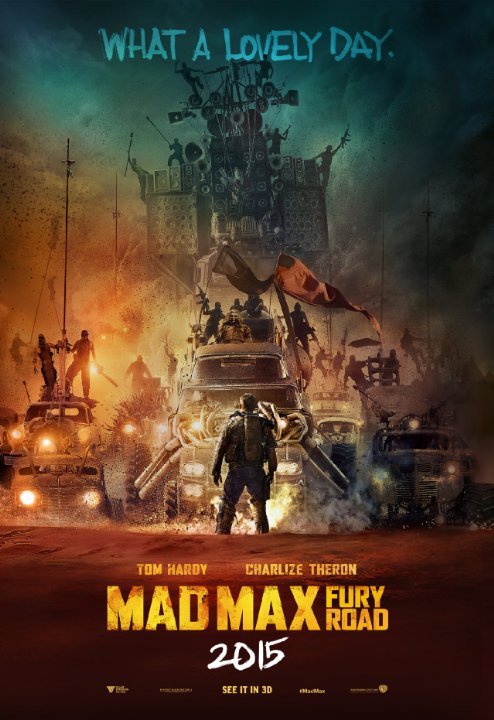 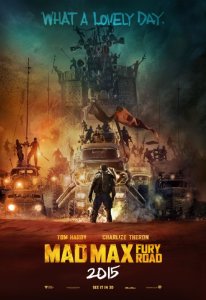 Director George Miller, yes, the same Director who brought MAD MAX to life with his trilogy of 79’s MAD MAX, 81’s MAD MAX 2 – The Road Warrior and 85’s MAD MAX – Beyond Thunderdome ~ has brought his character back to life once again, only this time it’s even more of an unconceivable world than before, so hold on tight as you experience ~ MAD MAX Fury Road!!

Making her way in the desolate wasteland she calls HOME, we find Imperator Furiosa (Charlize Theron) mastering the control of one of her people’s war ships, bound for places unknown.

As the people of this barren land struggle for survival, we meet Max Rockatansky (Tom Hardy), who battles for his freedom from the savages who want his life to save their own, and who struggles with the demons of his mind too, after the loss of his family.

Fighting to stay alive at every turn, Max happens upon Furiosa and the others from her tribe that she is trying to save, from the hands of their venomous ruler Rictus Erectus (Nathan Jones).

Fighting everyone and everything in their paths, Max and Furiosa melee to claim their freedom from the bleak and abandoned world in which they inhabit, as they try to save their race from utter extinction…

I give MAD MAX – Fury Road 4 out of 5 Stars: Talk about an extremely intense film from the first frame to the last – Miller has created a world some 30 years later that makes his original films seem like just a walk in the park. And the story line this time around is significantly different too, as Max plays more of a supporting role to the character of Furiosa, and her quest to make things right for her fellow man ~ or woman is the main premise of this film! Theron is absolutely fabulous as Furiosa, as even a buzz cut can’t diminish her beauty. She is so good in fact, that I am certain we will see her be back for more craziness in her desolate world sooner rather than later. The twist in the storyline of this generations MAD MAX also follows the adage that woman are just as powerful as men, which endorses the cry of Feminism of our time, so I think the ladies are going to enjoy this action packed thriller just as much as the men do too. The only negative for me ~ besides my heart racing throughout almost the entire film – I TOLD YOU IT WAS INTENSE – was the fact that Hardy didn’t have enough dialogue or face time for me, plus, his part was so reminiscent of his Bane character in Batman – The Dark Knight Rises, that it was as if I had already seen this performance before.

So, if you love extreme craziness and penetrating cinematography at every turn, which this film definitely has an abundance of, then get ready to settle in at a theater near you to experience the new era of Miller’s creative genius that is MAD MAX – Fury Road.