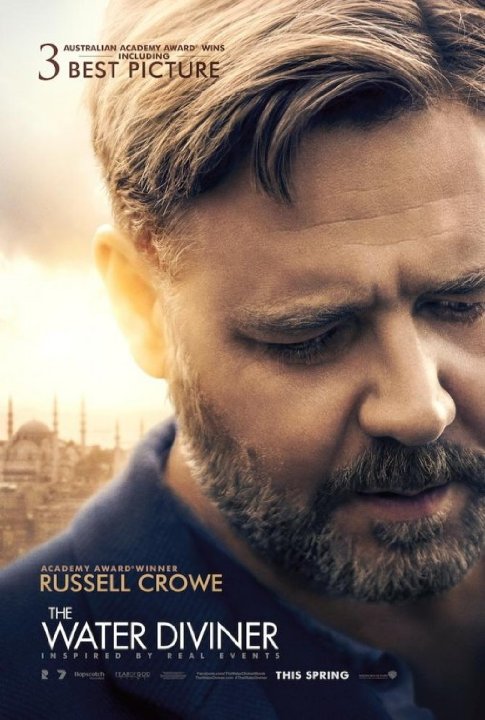 Directing his first major motion picture, and starring in the lead role too ~ Russell Crowe brings to life the very sad, incredibly moving, and beautifully picturesque tale of a man who finds himself searching for his three sons, after they chose to leave their Australian homeland to join the Army during WWI~ in THE WATER DIVINER.

Pained at the loss of her three sons to the ravages of war, Eliza (Jacqueline McKenzie) begs her husband Connor (Russell Crowe) to find their sons, who have never returned home after they were sent to aid the Allied forces in Turkey.

Using the same inner senses he uses to find water in the desolate backlands of Australia, Connor sets out in search of locating his son’s bodies, so that he can bring them home for burial, where they belong.

Deterred first by the British, and then by the Turkish Army militants from the war, who have returned to make their own peace with the past, Connor happens upon hotel manager by the name of Ayshe (Olga Kurylenko), who seems to be the only person who wants to aid him in his quest to find his sons.

Hell bent on carrying out his mission, Connor is determined to make it to the place of the Battle of Gallipoli, as he knows this is where his son’s remains will be. With the assistance of his newfound Turkish officer friends, Connor musters the inner strength that has guided Father’s for ages, as he needs nothing more in this life than to find his sons, and bring them HOME…

I give THE WATER DIVINER an 5 out of 5 Stars: Russell Crowe is absolutely superb playing the father who has only one mission in his lifetime, that of bringing his sons home. This film, its storyline and its picturesque views will touch not only your heart, but your visual senses too. This is the best work I have seen from Crowe in years, and Kurylenko is also superb as the possible new love interest for Crowe ~ as she has so moved on from being one of Daniel Craig’s BOND BEAUTIES~ She has become an actress of substance and maturity, to enhance her breathtaking beauty. Know going in that this film is by no means a “feel good” creation, but its tale and cinematic views will make you feel fortunate that you took the time to experience it’s depth and conviction for what is most important in life…FAMILY!