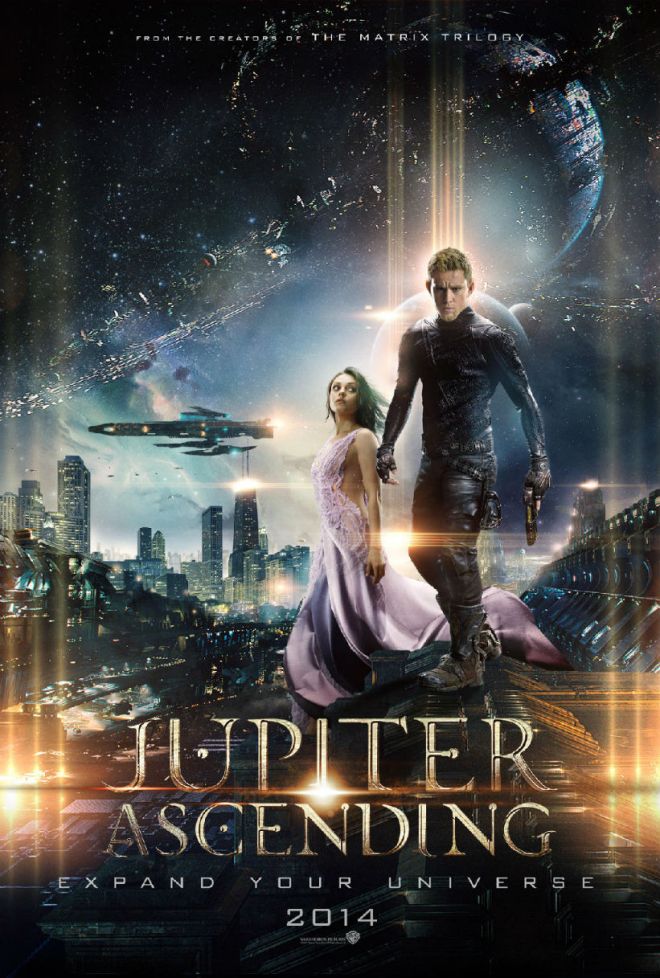 Andy and Lana Wachowski’s – the creative brother & Transgender sister team, who brought us 3 Matrix movies and the film Cloud Atlas – have brought to the big screen their latest sci-fi, action-packed thriller and love story ~ oh which genre should we choose? ~ with their latest film, JUPITER ASCENDING.

Loosing her father before her birth, Jupiter Jones (Mila Kunis) is stuck living in a world of poverty and cleaning toilets for a living. Just when she thinks she can’t take her life for one more day, Jupiter is rescued from an apparent abduction from creepers from another planet by Caine Wise (Channing Tatum), a genetically engineered ex-military hunter.

As Caine returns Jupiter to the far off planet where she supposedly belongs, she is met by fellow members of her royal family – or so they say – as Jupiter tries to adjust to the thought that she might actually be royalty too.

All of the Royal siblings of the Abrasax family, including Titus (Douglas Booth), Kalique (Tuppence Middleton), and Balem (Eddie Redmayne) have something in mind for Jupiter, and none of it sounds too inviting…

While Jupiter tries to fight her feelings for Caine, and come to terms with her DESTINY, what will happen to her family and the place we all call home – Planet EARTH???

I give JUPITER ASCENDING a C: I am so happy that I have had the opportunity to see Tatum, Kunis and Redmayne really act before seeing them in this film, because none of them even came close to reaching their full potential with this material. The whole concept of this film felt like a conglomeration of STAR WARS, STAR TREK, GUARDIANS OF THE GALAXY and any other space film you can name from the last two decades, just thrown together for good measure. At times, the cinematography and special effects almost started to impress me, but then just as quickly, it fell short with really bad effects moments later. The only positive factors I took away from this film was the fact that Mila definitely has some of the most beautiful brown eyes I have ever seen (lots of close-ups to prove it) and Channing can definitely pull off the Military Hunter gig and the attire to go with it quite nicely (HOT, HOT, HOT), but that is about it!!! It saddens me to give this film AN AVERAGE REVIEW, as I truly adore Mila, Channing and Eddie, but that’s exactly what this film is – JUST AVERAGE. It wasn’t good, it wasn’t bad, it just really wasn’t much of anything. So, if you love science fiction films filled with lots of creatures and characters from space, or have an addiction to action-packed thrillers with an underlying infatuation between the two main characters, then you might want to head out to a theater to catch JUPITER ASCENDING, but if you are wanting to see a spectacular film with an incredible storyline, amazing cinematography and phenomenal acting, well this film really isn’t that either…