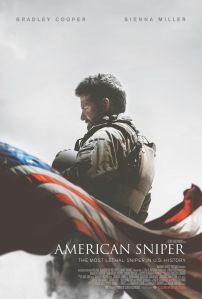 Becoming an expert shot at a young age; Chris Kyle (Bradley Cooper) is one of those guys that you want on your side. Moved by the terrorist attacks on 9/11, Kyle decides to leave his new wife Taya (played by Sienna Miller) and enter the military to defend his AMERICAN way of life. And what better way to help the boys on the front line, than to become a NAVY SEAL. When his commanders see that he is the best marksman they have seen in quite some time, they decide the best place for Kyle is on sniper duty in Iraq.

The excitement of saving his fellow military brothers quickly turns to dismay, when Kyle is faced with the reality that even the women and children of this foreign land are savages, wanting to kill Americans any way they can.

As the days turn into months, and the months turn into years, Chris finds himself torn between leaving his family yet again – which he knows he shouldn’t do – and the longing to go back to the front line and continue his plight to save as many Americans as possible.

Tagged with the nickname – The LEGEND – Kyle becomes the most celebrated sniper in U.S. History – having racked up more kills than anyone else before him. Chris decides that his 4th tour must be his last, as his wife and kids have had enough of him being away – and watching his comrades parish at the hands of the enemy has become too much to endure too.

But, can Chris every really COME HOME from the war???

I give AMERICAN SNIPER an A: Bradley Cooper is astounding as the Texan on a mission, saving hundreds of men from peril during the Iraqi war. He is most deserving of his Academy Award nomination for this role, as this is by far his BEST PERFOMANCE yet. Kudos to Director Clint Eastwood too, as this film is as real as it gets. AMERICAN SNIPER brings you into the FACE OF WAR, and the pain and anguish that all service members must feel each and every day. It also makes you respect and admire all military families, as it gives you a glimpse into the commitment and sacrifices they too must make to stand by their loved ones who are willing to give everything – including their lives – to uphold the freedoms that so many Americans take for granted.  AMERICAN SNIPER is a definite MUST SEE for every person in this country over the age of 17 –This film will move you in ways that few films ever have, while you experience the life of this extraordinary man. It is because of Chris Kyle and the many men and woman in uniform like him, that we can live in the LAND OF THE FREE, BECAUSE THEY ARE ALL SO BRAVE…