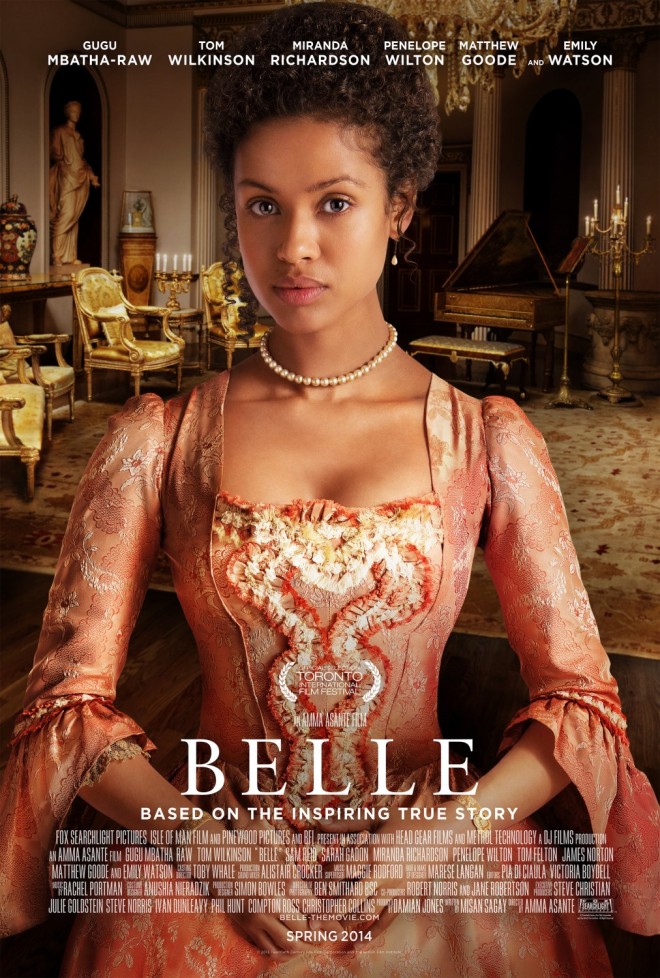 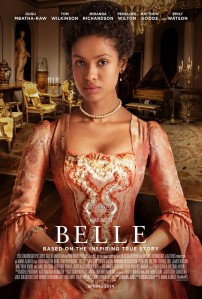 Born to a slave mother and aristocratic Naval Admiral Father, Sir John Lindsay (Matthew Goode), Dido Elizabeth Belle Lindsay (played by Gugu Mbatha-Raw) is aristocratic in her birth right, but her skin color warrants a different upbringing in 18th century England.   Admir. Lindsay requests the help of his uncle, Lord Mansfield (Tom Wilkinson) and his wife Lady Mansfield (Emily Watson) in the raising of his daughter, as her mother has passed on and he is to serve the Royal Navy.

Another youngster of the family has already been placed under their care, Elizabeth Murray (Sarah Gadon), as the two girls grow up like sisters under the watchful eye of their great-uncle and his wife.

As these two beautiful youngsters grow into beautiful young ladies, Elizabeth is given all the privileges that her birth right secures, yet Belle is not, due to her mulatto heritage.

Scared that she will never find true happiness and be accepted fully into the family, or society for that matter, Belle is introduced to the young vicar’s son, John Davinier (Sam Reid), as she is intrigued by his righteousness and willingness to change the world for the better.   Belle also catches the eye of another young man, Oliver Ashford, as her beauty is breathtaking, and so is her dowry, since his is not the first born son to the Ashford lineage.

Will Belle ever be allowed to live the life of an aristocrat, or will she be forced to live in the shadows forever?  And will she ever find true happiness, and someone to love her, not for her money, but for the beauty that she is?

I give Belle a B:  I thoroughly enjoyed this historic true story which brings to light the end of slavery in England in the last 1700’s.  I also love period films that have incredible costumes, and this film did not disappoint.  I was also very impressed by Gugu Mbatha-Raw’s performance, as it was so much better than the short, yet sweet role she played as Wilmer Valderrama’s girlfriend in LARRY CROWNE.  Sam Reid was also very good as the want-to-be lawyer, trying to change society’s indiscretions towards the Negro race, while trying desperately not to fall for the insatiably beautiful Belle.  If you love historic 18th century films, then BELLE is definitely one you won’t want to miss, so pick up a copy of the DVD this holiday weekend and get lost in the grandeur and innocence of BELLE!