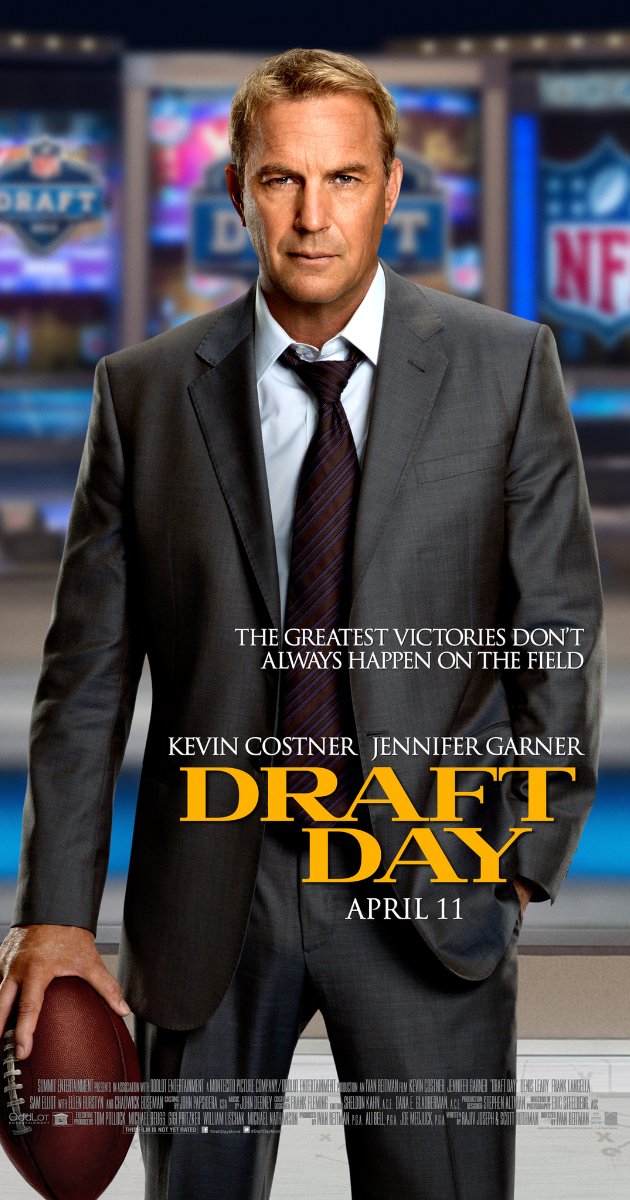 Ivan Reitman, the producer and director who has brought us films like GHOSTBUSTERS, NO STRINGS ATTACHED, UP IN THE AIR and OLD SCHOOL, is bringing to life “the biggest day of the year” for any football team, in his latest film DRAFT DAY!

General Manager Sonny Weaver Jr. (Kevin Costner) lives out his days as the General Manager of the Cleveland Browns.  Having never had the opportunity to make it to Superbowl, Sonny is chomping at the bit to make things happen for HIS TEAM with this year’s draft.

Vying for the First pick in the draft, Sonny has BIG PLANS for what lies ahead for his team.   As all of his plans for the Browns seem to be lining up nicely, Sonny’s secret girlfriend – the beautiful football analyst Ali ( Jennifer Garner) blind-side’s him by throwing  a wrench into Sonny’s plans for his life off the field.

As Sonny is trying to focus on the task at hand – DRAFT DAY – and he is trying to decide who holds the key for the future of the Cleveland Browns, he finds himself torn about going after who seems to be THE PERFECT CHOICE, although something in his gut is telling him differently, and who he feels might be THE RIGHT CHOICE.

Will Sonny make the right moves to turn his team around and make them destined to head for THE BIG GAME?  Will Ali try to pull together both of their lives, as Sonny doesn’t seem to have time to deal with her, or the situation they have created together at this exact moment?  Or will Sonny make all the wrong moves, ultimately causing Cleveland Browns Owner Anthony Molina (Frank Langella) to fire his you know what!

I give DRAFT DAY a B+:  I love the sport of Football, as growing up, if you wanted to watch Television on a Sunday, your choice was Football, or Football or more Football, as we only had one TV, and that what my father watched from noon till all the games were over!  So, I was anticipating going in that any movie which focuses on the NFL Draft, I was going to remotely enjoy.  Surprisingly, I not only enjoyed the “twenty-four-esqe” feel of the film (as in the show 24 starring Keifer Sutherland), but I absolutely was taken in by Costner, and his antics, to get, in the end, exactly what he has always wanted.  Draft Day gives you those intense feelings that each young man must feel as they await the calling of their name, or not.  It also brings you into the slimy lives of the agents and their wheeling and dealings at the expense of these young men – making it also very Jerry Maguire like.  Real-life excitement and heart ache are played out in every frame of this film.  Kudos to Costner too, for choosing roles this late in his career, that are capitalizing on his rugged good looks and charisma – both this film and 3 Days to Kill have been great choices for him to show off his character and style – suffice to say – He’s still got IT!   It’s also very enjoyable seeing so many actual NFL Players – past and present, along with ESPN and NFL Network announcers – well, you get the picture –it seems like you are watching the actual draft.  Suffice to say that this film just might end up being “one for the record books” if all the football loving fans out there end up loving this one as much as I did……….and head out to a theater to take it all in!