In theaters on June 15

Writers:                Screenplay by Rob McKittrick and Mark Steilen, screen story by Mark Steilen, based on the Wall Street Journal article entitled “It Takes Planning, Caution to Avoid Being It” by Russell Adams

One month every year, five highly competitive friends hit the ground running in a no-holds-barred game of tag they’ve been playing since the first grade—risking their necks, their jobs and their relationships to take each other down with the battle cry “You’re It!”   This year, the game coincides with the wedding of their only undefeated player, which should finally make him an easy target. But he knows they’re coming…and he’s ready.  Based on a true story, “Tag” shows how far some guys will go to be the last man standing. 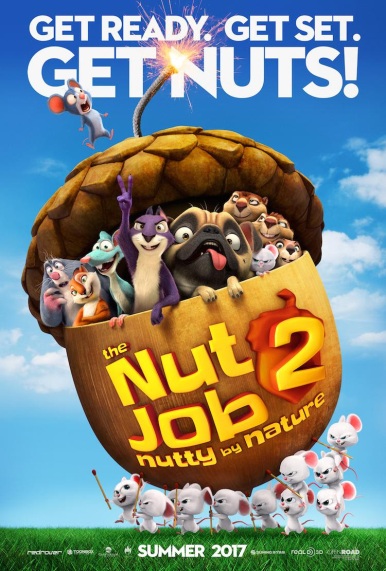 Get ready to take back the park!

Surly and the whole gang are back in a brand new trailer for THE NUT JOB 2: NUTTY BY NATURE! This nutty new animated comedy stars Will Arnett, Jackie Chan, Maya Rudolph, Katherine Heigl, Gabriel Iglesias, and Jeff Dunham.

Get ready. Get set. Get NUTS with the whole family when this sequel to the 2014 animated hit hits theaters everywhere August 11!

THE NUT JOB 2: NUTTY BY NATURE

Surly Squirrel (Will Arnett) and the gang are back. We are once again in Oakton where the evil mayor has decided to bulldoze Liberty Park and build a dangerous amusement park in its place. Surly and his ragtag group of animal friends band together to save their home, defeat the mayor, and take back the park.

Back for another romp directing his star-pupil, Melissa McCarthy – He previously directed her in BRIDEMAIDS & THE HEAT – Paul Feig is out to prove McCarthy’s got what it takes to be a REAL SPY too, with his new film – SPY!

Delegated to the dungeon of the CIA headquarters, Susan Cooper (Melissa McCarthy) seems to be the brains of the operation, signaling critical info to keep her partner, Bradley Fine (Jude Law) alive.

When Fine meets his demise at the hands of the beautiful, yet completely ruthless Rayna Boyanov (Rose Byrne), Cooper is devastated, as maybe for her, they were more than just friends.

It seems too, that Boyanov and her cohorts in crime have a make on ALL of the CIA Operatives, including the notorious Rick Ford (Jason Statham), forcing Chief CIA Operative Elaine Crocker (Allison Janney) to take Cooper up on her offer to go undercover, as no one on the outside knows she exists.

Given the lamest and most undesirable cover identities known to man~ Cooper tries to make the most of it~ as she sets out to find Rayna and her accomplice, Sergio De Luca (Bobby Cannavale).

Even though Ford has been told to stay far away from Cooper since his identity is known ~ like any typical macho guy ~ he can’t let a woman handle this… but, since Rayne and Sergio know who he is, is he going to blow Cooper’s cover too???

I give SPY 4 out of 5 Stars: Are you as surprised as I was by that rating??? After seeing the trailer for this film, I thought going in that I would be settling for another of McCarthy’s typical type cast films. BOY, WAS I WRONG!!! SPY is anything but your typical Melissa McCarthy film! Don’t get me wrong, I love her funny side and her quirky sense of humor ~ which does periodically appear in small doses~ but this film is SO MUCH MORE!! She actually plays a SPY – she is the brains of the operation…and actually kicks some bad ass they along the way too ~ who knew she had it in her?! And true to form, Jude Law and Jason Statham are perfectly cast in their respective roles, and I loved Byrne as the Diva/Prima Donna/BAD GIRL as well…everything about this film just totally clicked. I even found myself feeling slightly remorseful for my rash judgment going in as I watched everything unfold. This was definitely one of those movies that caught me totally by surprise. I also won’t be shocked if there are additional SPY films in McCarthy’s future, because as strange as it sounds, Mellissa totally nailed the CIA agent/SPY role – and could reprise it again, and again, if she wanted to! 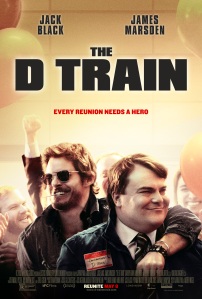 From Writers and Directors Andrew Mogul and Jarrad Paul, comes a REUNION FILM that won’t leave your psyche any time soon ~ with their new comedy ~ THE D-TRAIN.

As the self-imposed CHAIRMAN of his High School Reunion Committee, Dan Landsman (Jack Black) is finding that he may be even less popular with his fellow classmates than he was in high school.

Bound and determined to leave his mark with his fellow classmates, and on this reunion, Dan sets out to track down a fellow classmate, Oliver Lawless (James Marsden), who he believes is now A SUPERSTAR, from having made a tanning lotion commercial ~ making him even MORE POPULAR in Dan’s mind!

Pretending that he needs to go on a “business trip”, Dan heads to LA to locate Oliver and convince him that attending their 20-year reunion is A MUST, because if he comes, everyone else will too!!

Well, what is a good host to do but to show their guest a GOOD TIME, as Oliver takes Dan out on the town for a night he WILL NEVER FORGET ~ but remember, what happens in LA, stays in LA!

When Dan returns to the cheers and roars from his fellow committee members, from securing the one, the only, OLIVER LAWLESS for their reunion, Dan is flying on CLOUD 9, as now, he too has made “the big time” ~ well, in his own mind anyway!

As fantastic as securing Oliver for the reunion is, Dan is still trying to come to terms with a few things that transpired in LA, like the lies he told his boss to get him out there, and what about his newfound “relationship” with Oliver, that he just can’t seem to get off of his mind either…

I give THE D TRAIN 3 out of 5 stars: I was totally excited to see Black and Marsden together in this film, as they seem to be the perfect polar opposites to play their respective roles.  Black playing Dan, the family man, wanting to make his life “so much more” and Marsden playing the washed up actor with too many other issues to keep track of, this seemed like it was truly a casting for the ages. But, even though the casting was dead on and Marsden being scruffy plays out “really nice”, parts of this film just went off the rails for me. From it’s slowness ~ come on, lets get to the point~ to the lack luster material for Kathryn Hahn who plays Stacey, Dan’s wife, this film just seemed to loose steam as the scenes went by. So, even though I wanted to give it a fantastic rating and was hoping that it was going to be an absolute joy ride of epic proportions, it just turned out to be another okay film for me. Here’s to hoping that the next epic film that is a MUST SEE is just around the corner!!!