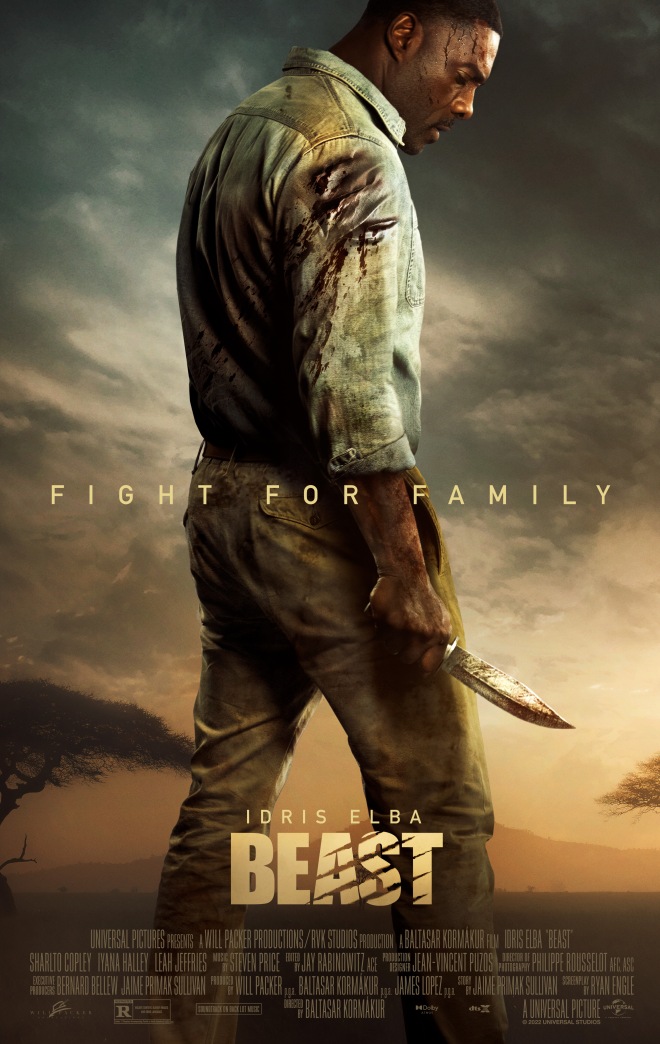 Venture, if you will, into the African savanna, as a family still grieving over the loss of their matriarch, takes a trip of a lifetime…

And, once they arrive in this beautiful place, life-long family friend Martin (Sharlto Copley), shows Dr. Nate Samuels (Idris Elba), and his two teenage daughters Meredith (Iyana Hailey) and Norah (Leah Jeffries), just how beautiful, and dangerous this African paradise can truly be.

Dangerous is an understatement, when our venturers soon find that a rogue Lion is killing complete families of villagers, and not for food, but for sport it seems, and it isn’t long before the BEAST sets his eyes on their very own expedition party.

Now, it’s up to Dr Samuels to save Martin, and his girls too, from this notoriously nasty creature, who hunts humans for fun…

I soooo adore Idris Elba, and when I heard that he had two movies releasing in August, I was super excited to head to the theater to see what he had in store for the big screen.  I even managed to convince my hubby to venture to the theater to catch this menacing Lion-extravaganza with me, as he too, enjoys Elba and his action-packed adventures.  But as the story of this film unfolds, and the CGI’d Lion becomes more absurdly unrealistic as the moments tick by, I found myself agonizing along, hoping at some point that Elba would not only be able to save his family, but this film too, with his incredibly acted dialogue and superb action moves. But as we venture along through this not long film – its only and hour and a half – it seems that even Elba can’t save BEAST from what seems to be its very own devised mediocrity.  It’s sad too, when you realize that South African born and raised Sharlto Copley returns to his native land to show off his acting prowess, and he doesn’t get near the screen time, that the badly CGI’d Lion does.  And it’s sad too that youngsters Iyana Hailey and Leah Jeffries really try to show off their range as actors in almost every inch of this film,  only to be foreshadowed by the way too many filler scenes, as the menacing Lion stalks, and stalks and stalks his prey.  But the most painful part for me within this film, is the fact that I felt like I had seen parts of this film before…thinking that if I just superimposed a St. Bernard instead of the Lion in the vehicle scenes, it could have just as well went back to watch 1983’s CUJO, and called it a day.  I just hate when I have to share reviews like these that aren’t sending you all out to “a theater near you”, as I want my readers and followers to do exactly that, each and every week, right along with me.  But I am compelled to always tell the truth,  and the truth about BEAST is that it misses the mark in almost every direction of becoming a movie that you “just have to see”… so I can’t in good faith tell you to venture out to see this one, on any big screen…