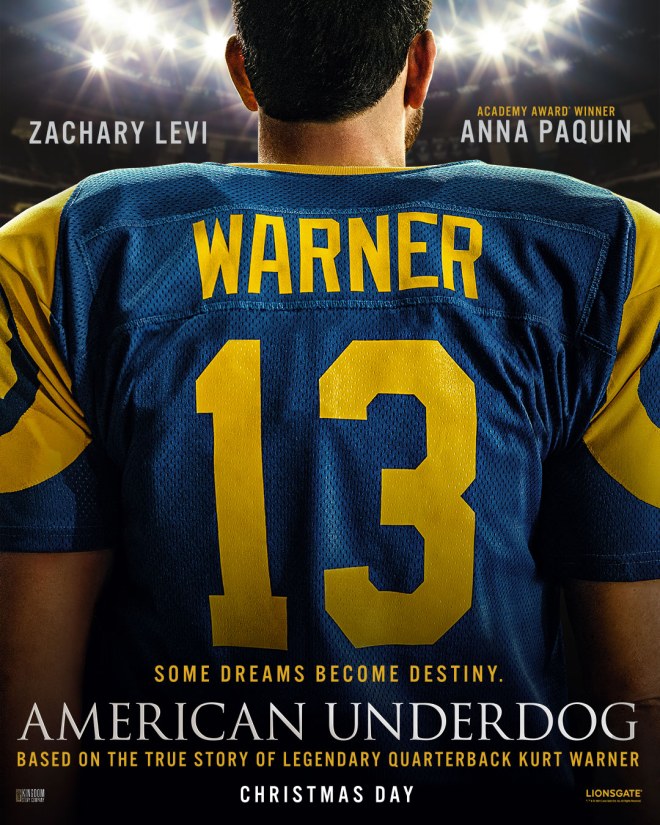 WRITERS:  Based on the Book “All Things Possible” by Kurt Warner and Michael Silver.

For all you sports-film loving viewers out there, this one is FOR YOU…so get ready to venture into this MVP’s life, long before he became a legend on the field in St. Louis, Missouri…

Wanting to play football for as long as he could remember, young Kurt finds himself playing in college, hoping that the NFL draft will want to pick him up.

Meantime, on the love-story front, a young and beautiful girl by the name of Brenda (Anna Paquin) has caught Kurt’s eye, dancing at a local country dive.  Playing hard to get, as Brenda knows that this fresh-faced football player is going to run for the hills, once he knows she is a single mom with two kids.  But even when Kurt finally finds out the truth about Brenda’s home life, he is even more intrigued to find out who this incredible woman really is…

With his love-life finally on track, it seems that the Football world may just want to see what the Kurt brings to the game too, although when his opportunity finally arrives in the NFL, it only lasts two days, before he’s sent packing, with his tail between his legs.

With no other choice than head back home, find a job, and put his Football dreams on the backburner, Kurt soon finds himself stocking shelves at a local grocer, trying to make ends meet for his new family.

When Arena Bowl creator Jim Foster (Bruce McGill) comes a calling, wanting Kurt to quarter back his new team, the Iowa Barnstormers, Kurt must decline, as this isn’t really isn’t the game of football, he knows and loves…

But as Kurt and Brenda’s bank account dwindles more and more with each passing month, Kurt’s only real option is taken up Jim on his offer, heading to play a more fast-paced type of football in arena’s all over our country, and eventually in Europe too.

As luck would have it, his finesse on the field in his AFL appearances haven’t been for nothing, as they have caught the eye of one very seasoned Football coach, Mr. Dick Vermeil (Dennis Quaid), of the St. Louis Rams.  Vermeil wants Warner to consider becoming their back-up quarterback, for their first-rate talent presently on the field, Trent Green, giving Kurt the opportunity to finally make it back to the NFL.

But when Trent is severely injured early in the season, it’s now up to Kurt to take on the position, for the rest of his teammates to succeed.  Under the continuous support of his wife Brenda, and new coach Dick Vermeil, Kurt finally gains the strength to show to world what he is really made of, taking the Ram’s to two Super Bowls, while garnering the accolade of MVP, finally, for his superb talents on the field…

I give AMERICAN UNDERDOG a rating of 4/5:  Being brought up in a household where the only thing that ever hit the screen from morning till night on a Sunday, or Monday night for that matter, was Football, I had very high expectations for this film, and AMERICAN UNDERDOG did not disappoint.  And having lived this true-life story, of the life and times of what Kurt Warner did in St. Louis, playing quarterback for the St. Louis Rams, put the bar pretty high too, and this film totally delivered on that front for me as well!  Zachery Levi (Shazam! for those of you who aren’t quite sure who he is) was superb, playing a young man with big football dreams, that never gave up on making those dreams, reality!

Anna Paquin was good too, playing wife, and the #1 supporter of the Kurt Warner, Brenda Warner, as you feel the strength and support that these two have had for one another throughout their entire relationship. I’ve always loved Dennis Quaid and seeing him play the legendary Super Bowl coach Dick Vermeil was awesome to see, as Vermiel was one of my Father’s favorite coaches of all time too.  You will also enjoy seeing Mike Martz (Chance Kelly) come into to play on screen, as rumor had it that he was just as big a schmuck as the performance Kelly portrays in this film.  And once you get to see Isaac Bruce (Simeon Castille) and Marshall Faulk (OJ Keith Simpson) hit the screen, this film transports you back to time when NFL Football was thriving in St. Louis.

This film is so fabulous, not only as a sports film, but as a film that makes you want to go live out all those dreams you’ve had your entire life… just like Kurt made happen! SO…If you are from the St. Louis Metropolitan area, suffice to say, you have to see this film!  If you were around when Kurt Warner was finally given the opportunity to become one of the greatest men to ever hit the turf…then you have to see this film!  And if you are a big old sap, like me, that loves feel good stories, that will make you once again believe that with strength and perseverance, anything is possible, then you most definitely have to go see this film this weekend, at a theater near you!