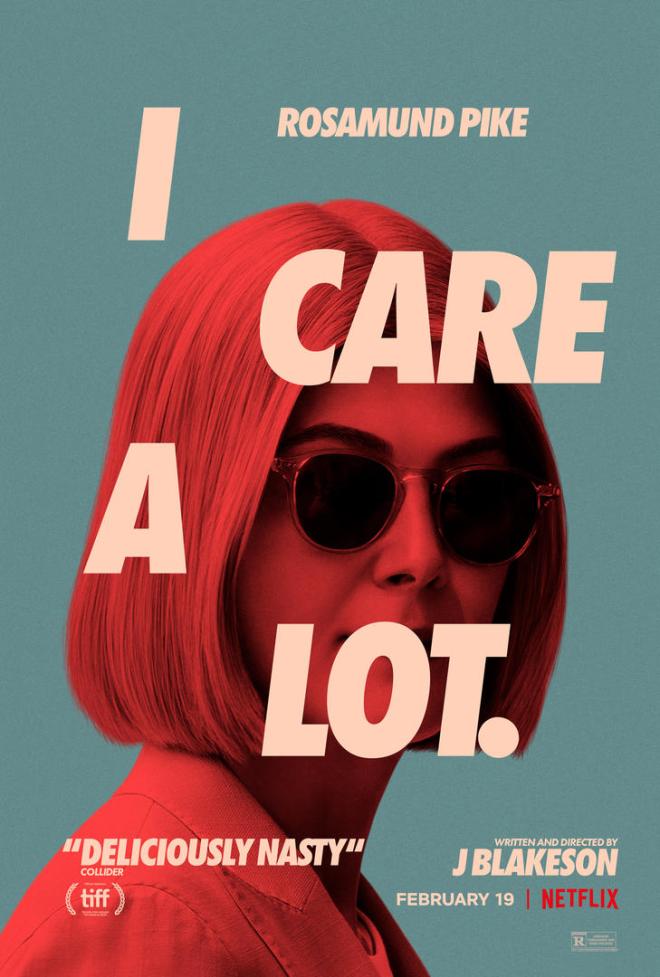 THIS REVIEW is brought to you by KATHY KAISER @matineechat.com

Netflix has been pumping out some fabulous studio films as of late, and when I heard that Rosamund Pike, Ms. Gone Girl herself, was taking on their latest creation, I CARE A LOT, I couldn’t wait to catch it popping on streaming last weekend.  But my excitement began to wane rather early on, as I stepped into the life of the cunningly masterful Marla Grayson (Rosamund Pike), as she has designed the perfect scheme to rid unsuspecting older folks of their life savings, by twisting the Courts into making her their Legal Guardian.  This perfectly orchestrated racket is not only making Marla rich, but her assistant and lover Fran (Elza Gonzalez) pretty well off too, as they happen upon a new perfect addition to their dozens of elderly wards, Ms. Jennifer Peterson (Dianne Wiest).  But not so fast there Marla, as Jennifer isn’t quite that old and frail single lady you thought she was -with all the cash in the world – but it seems she comes from a much darker and sinister world, than you could have possibly bargained for…

And once this film was all said and done, I was astonished at the fact that Pike was just nominated for a Golden Globe for Best Performance by an Actress in Motion Picture, Musical or Comedy for this film, as I didn’t see anything from her in this performance, that I haven’t seen done better by her before.  And even though there are times when I really thought, okay, we’re finally getting somewhere, when it would turn a little scathing, or a bit nastier too it seemed, just that quick we were right back to me asking myself the question, is this really the best they got? And without giving the entire premise of the film away too in this review, let’s just say that Diane Wiest and Peter Dinklage should be the last people standing, but once again we venture into the realm of striving for scenarios playing out on screen, that end up about as far-fetched as you can get. The saving grace for me throughout this film, was the performances by Wiest and Dinklage, as they are both spot on and totally believable at every turn, which is something that Pike and Gonzalez never really manage to do.  The most satisfying part of this let down of a film for me, finally arrived in the last five minutes of shooting, as the perfectly scripted and orchestrated ending, had me almost cheering in my seat, as I finally felt some restitution for the previously painful 2 hours I had endured, had finally arrived, as one of the most perfect endings I’ve actually seen in a film, in quite some time!