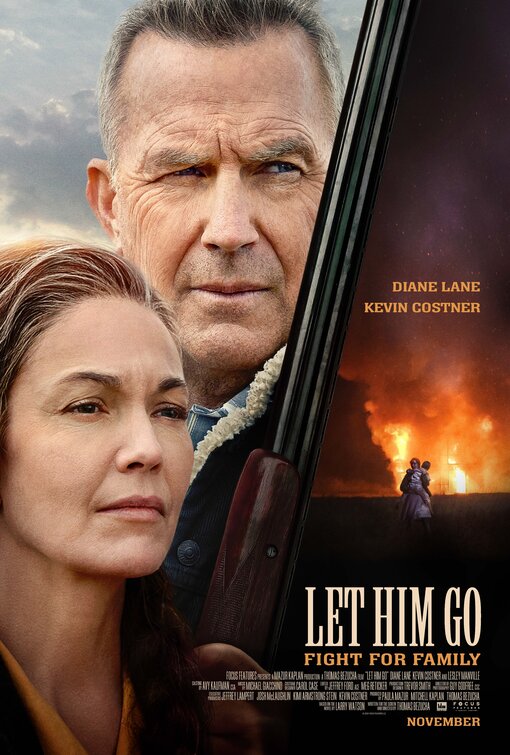 WRITER:  Based on a Novel by Larry Watson

Based in a 2014 Novel by Larry Watson, we venture into 1950’s North Dakota, as we meet retired Sheriff George Blackledge (Kevin Costner), and his wife Margaret (Diane Lane), as they fill their days working on their Horse Ranch, and helping to take care of their new grandson Jimmy, as their son James (Ryan Bruce), and his wife Lorna (Kaylie Carter), are presently living with them to help out with the Ranch…

When tragedy strikes, and James is killed, George and Margaret grieve their son’s passing, but find comfort and solace in the fact that their daughter in-law, and grandson, have continued to reside with them, allowing for them to see young Jimmy grow.   But when Lorna decides to remarry a thug in town named Donnie Weboy (Will Brittain), he abruptly moves Lorna and little Jimmy back to his hometown, hundreds of miles away.  But before they leave, Margaret views Donnie abuse her grandson, and his mother too, so when she finds out he has taken them both out of town, she is hell bent on finding Jimmy, and bringing him back to live with them, where he belongs….

Much to George’s discontent, and beyond his better judgement, he ventures with Margaret to find their grandson, and to bring him back home.  But, little do they both know, messing with the Weboy family, especially their Matriarch, Blanche Weboy (Lesley Manville). is about to get them both a whole lot more, than they ever bargained for…

I give LET HIM GO a rating of 4 out of 5 Stars!  Heaped with scenes from our countries beautiful Northwest, and filled with fabulous acting throughout too, LET HIM GO is one of those films that simmers slow to begin with, but manages to get revved up midstream, as it ventures into a robust and rather painful conclusion by the time it’s all through.  I was super excited to see that Director Thomas Bezucha had joined forces with Costner, who produced this film,  and that they had the foresight to put Costner opposite Lane again for this film, as I’ve loved them both playing the earthly parents of DC’s Superman, even though this time around their roles are a lot more dramatic and emotional throughout, as their grief for their son leads to a quest to find their grandson, which seems to surpass their better judgement, every step of the way.   Lesley Manville is also exciting to view, as she plays the mean and nasty Mama of those heathen boys she’s managed to raise.  And the storyline this time around throughout turns rather demented as they say too, which I really wasn’t anticipating at all, as this particular storyline unfolds.  Rather dark and depressing as we venture along too, LET HIM GO ends up being an emotional roller coaster, that’s for sure, but if you were hoping to catch a film with some feel good vibes along the way too, think again, as this film isn’t at all a “pick me up”, no matter how you try to dissect it when its through!  LET HIM GO does manage to take you down the path of love of family above all else, which is endearing I must say,, but it also becomes very graphically violent at key moments too, so keep that in mind too before you decide to head out to catch this one, at a theater near you!

LET HIM GO is now showing in Theaters all throughout the St. Louis Metropolitan area starting Today 11/6,