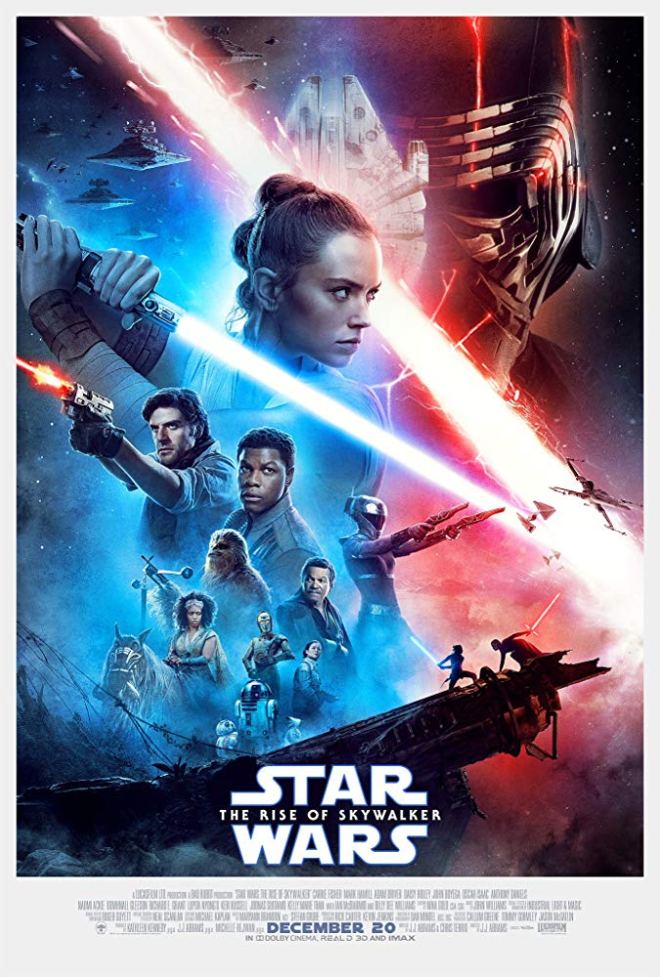 WRITER:  Chris Terrio, based on the Characters created by George Lucas

As we venture into the final episode of the Star Wars Saga as we know it, it seems that those surviving as a part of the Resistance, are about to engage in battle with the First Order once more, taking us into another battle of good vs. evil, throughout the Galaxy…

I give STAR WARS: THE RISE OF SKYWALKER a rating between MUST SEE ON THE BIG SCREEN and WAIT AND CATCH THIS FILM ON DVD:  Now, for all you Star Wars fanatics out there, of course you’ve had your tickets for tonight’s release for months now, and there is no way that you wouldn’t see this final installment on a big screen near you! I also know that you, as I, have been waiting in anticipation to see what this final installment has in store for George Lucas’s masterful film and storyline creation.  But, for those of you who just enjoy the films, reminiscing back to 1977 when it all started, you may interested in my “less than totally blown away” review of this final feature.  Don’t get me wrong, this film is intense from beginning to end, as the action throughout harkens back to the Star Wars of yesteryear, as Abrams and his team tried to bring back as many elements as possible to make their storybook ending come full circle.  Good intentions didn’t prevail this time though, as the storyline they came up with throughout felt rather disjointed, as if they knew they had to reach the finish line, but weren’t quite sure on how to go about creating a powerful, meaningful, or slightly profound way to do it, which I totally feel is what ALL Star Wars junkies deserved in this final showdown.  Maybe Lucas should have taken the writing into his own hands to finish off what he started…  Maybe Abrams and his team struggled on what to do with the untimely death of Carrie Fisher? Maybe Abrams and his writing team should have ventured deeper into the lives of the characters we have come to love for decades, since they arrived on movie screens many moons ago, and found a way to truly take us deep into a galaxy, far far away, for this one last joy ride!  But sadly, it just doesn’t happen.  Yes, we manage to reach a final destination, but it felt anticlimactic at best, which made my heart ache, as the rather mundane, and sometimes almost sterile turn of events that was taking place on screen, just wasn’t doing it for me.  As much as I wanted to totally love every minute of this film, I just left the theater feeling like, okay been there, seen that, and not really much more.  Not exactly the feeling I was sooooo longing for since the trailer for this final installment popped in early April.  But with all that said, I would be remiss if I didn’t share the following with you too, before this review is through, and that fact is, I am so glad that I gave Adam Driver a second chance playing Kilo Ren.  Truth be told, I wasn’t quite sold on his performance when he first appeared in 2015’s The Force Awakens, as without him this time around, and his performance throughout this film, The Rise of Skywalker would have been even more disappointing for me than it was, when it was all said and done…so thank you Adam, for keeping the ending of an era since my teenage years, from becoming a complete let down!