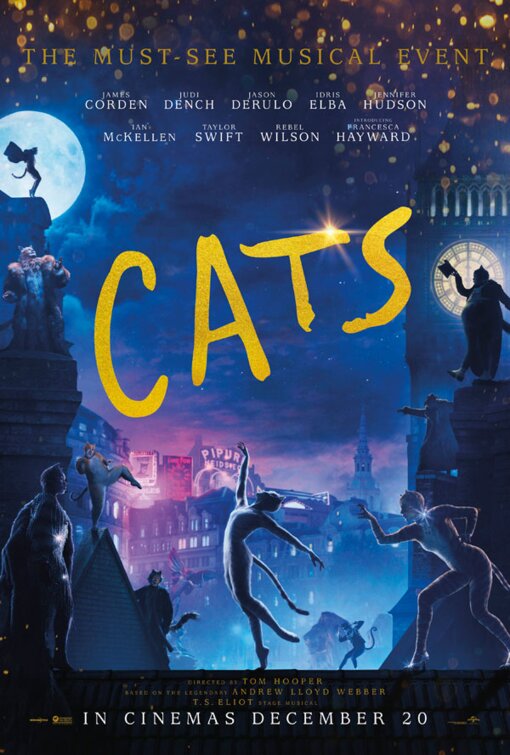 Based on the Broadway Musical CATS, which originally hit the stage in 1982, and adorned the Winter Garden Theatre stage for 18 years ~ we meet a menagerie of discarded Jellicle cats, that decide each year, which one of them will ascend to the great unknown, only to return to a new Jellicle life…

I give CATS a rating of DON’T WASTE YOUR TIME OR MONEY:  If you love musicals as much as I do, I know you have been waiting with bated breath to see this award-winning, longest running Broadway musical to date, hit the big screen.  And with such an incredible cast, including my favorite late-late night host James Corden, songstress Extraordinaires Jennifer Hudson and Taylor Swift, the “Dame” herself Judi Dench and the incredibly talented Idris Elba in the mix, you know that this much anticipated film is going to be a big hit right!  Well, maybe not so fast!  As incredible as Andrew Lloyd Webber’s music is throughout, the film itself, just misses the mark in so many directions, it’s kind of hard to know where to start.  From Hooper’s misdirection – including his keeping the pipes of Jennifer Hudson at bay until almost the end of the film, to the not exactly cat-like persona portrayed by everyone throughout this film, to the not quite provocative, although some of the scenes seem to try to get to that point of confusion throughout, this film is quite simply misstep after misstep, after misstep.  The fact that I had to fight not falling asleep through at least the first hour of this slowly moving musical, became excruciating.  Even sadder for me, was the fact that Taylor Swift’s performance – albeit only being about 10 minutes throughout the entire film – outshines in both acting and singing what Hudson gets to put on screen.  I was even more surprised when I realized that Amblin films was behind this creative disaster, as Spielberg usually has a much better eye than what ended up screen with this ill-fated production (Hoping his next musical project West Side Story, fares much better in 2020). I was even more saddened throughout by the fact that even Judi Dench didn’t have the star power this time around, to save this “cat”astrophe of a film.  Please take it from someone who will sit through Musicals all day, every day, if given the chance, no matter if on stage, on the big screen, or even on TV at home that CATS will now be my one exception to the that rule – as I truly don’t know if I can force myself to sit through this film EVER again…