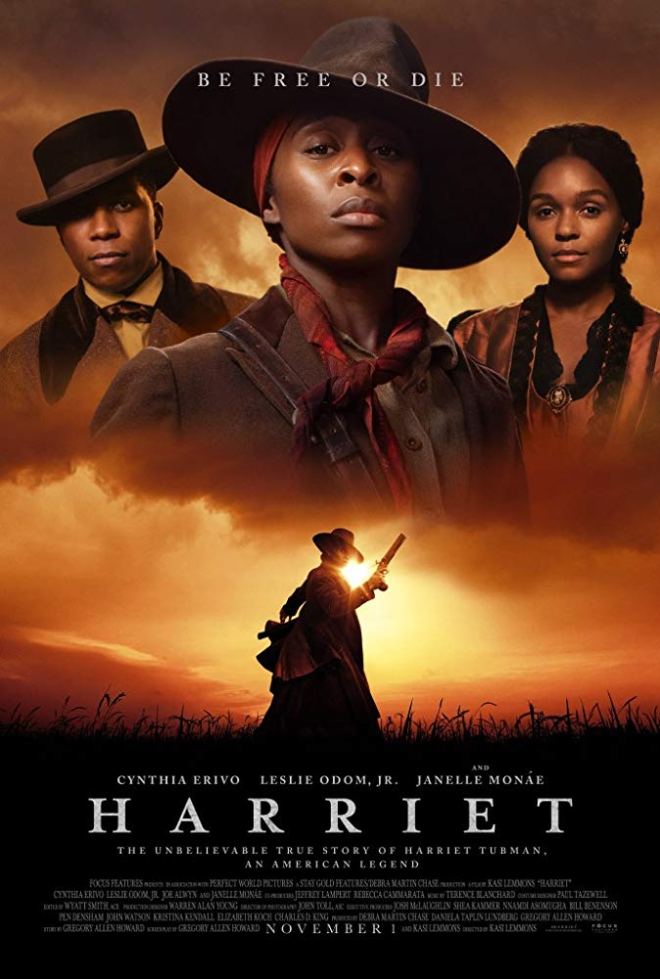 Based on the real-life story of Iconic American Freedom Fighter, Harriet Tubman, we meet Harriet (Cynthia Erivo), aka Minty, as she struggles to gain freedom for herself, and her family, from the viciousness of slavery.  Left with no other choice but to find a way to free herself, Harriett escapes the throws of slavery in the South, venturing to the North and the “land of the free”.  With her freedom now secured, but longing for her family and friends to join her, Harriett sets out to help free hundreds of Slaves from their bondage, thus changing the course of their lives, and our country’s history…

I give HARRIET a rating of MUST SEE ON THE BIG SCREEN!  Cynthia Erivo is Oscar nomination bound for her outstanding performance as Harriet Tubman, of that, I am certain.  From encompassing her days as a slave as Minty, to the courageousness she managed to portray throughout every inch of Harriet’s life, Cynthia personifies the life and times of this iconic figure, in our History, with such passion and glory, that everyone in this country needs to see.  I won’t be surprised if this film becomes a “must see” in every history class from 6th grade through College too, as Director Kasi Lemmon’s strategically places the emphasis of this film on Harriet’s life, without diminishing her struggles, but without focusing the intent of the situations that develop, solely on the cruelty and violence of slavery, thus making this historically significant tale a visual masterpiece that everyone over 12 can view.  Lemmon also surrounded her lead with some fabulous supporting actors throughout as well ~ including Janelle Mona’e, Joe Alwyn and Vondie Curtis-Hall ~ which managed to add significantly to the story that was being told too.  And along with Lemmon’s’ perfectly crafted storyline, came a visually stunning film as well, with perfect scene, after perfect scene, after perfect scene, transporting you to a time and place that you just have to experience for yourself.  Suffice to say that there was not one viewer that I spoke with after the screening that wasn’t profoundly moved by Erivo’s incredible performance, or the way that this film manages to draw you into Harriet’s struggles, and triumphs, with each passing frame…