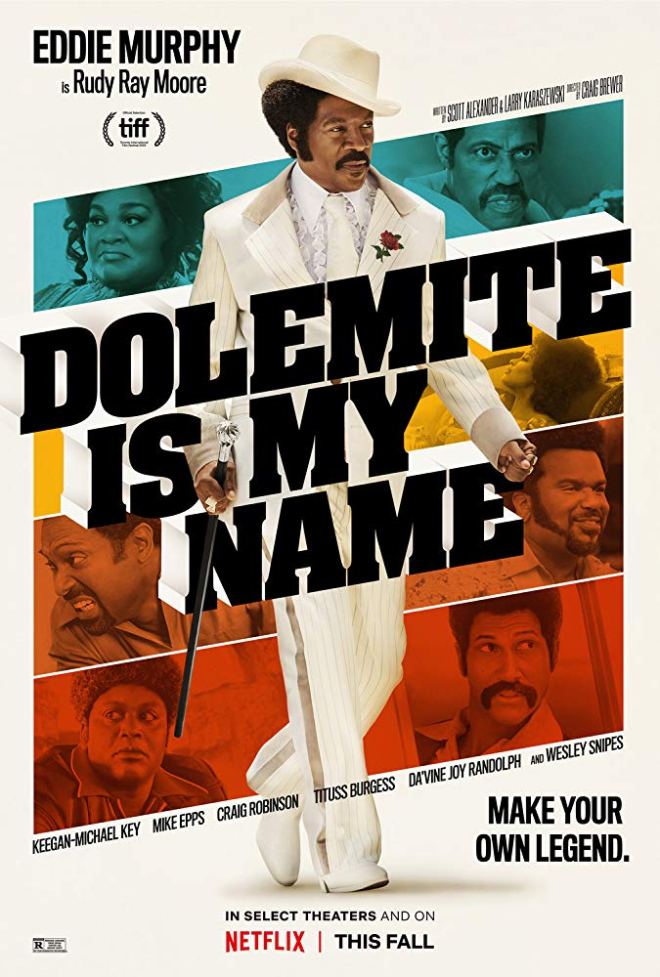 DOLOMITE IS MY NAME – Rated R

DOLOMITE IS MY NAME – Rated R

Raunchy is the only word I can think of when I think of “Dolomite is My Name.” The film is the real-life story of Rudy Ray Moore who was best known as “Dolomite.” Moore, (Eddie Murphy), was a failed musician in the 1970’s who became a sensation as a stand-up comedian. He was known for his rhymes.He is considered the father of Hip-Hop. Moore decides to make a movie using all of his own money and money he had to borrow because no one else will finance it in the movie industry.

“Dolomite is My Name” is the first movie that Eddie Murphy has made in three years. This Netflix movie has no shortage of financial support as witnessed by its star-studded cast: it is full of African-American movie stars. Murphy is supported by Wesley Snipes, Mike Epps, Chris Rock, Snoop Dogg and Keegan-Michael Key. Da Vine Joy Randolph is Lady Reed. Randolph and Murphy bring a very warm human touch to their roles. You really feel for them and it made the film for me. Moore was an over-the-top kind of guy and Murphy seems to love hamming it up. This role was made for Eddie Murphy. Craig Brewer directed and was able to bring out the best in his cast. The successful writing team of Scott Alexander and Larry Karaszewski, who wrote “The People vs. Larry Flynt” and “Man on the Moon” and many more, penned “Dolomite is My Name.” I loved the costumes. Moore was known for his flamboyant outfits. His cronies all adopted garish clothes too. The costume designers must have had a ball trying to replicate the costumes. People who are turned off by the F-bomb and nudity will hate this film and need to stay far away. Moore seemed to call everyone a Mother-F bomb. If you can get through the risqué language and nudity, there is an interesting story underneath. But beware, there is more vulgarity in this film than usual. I left the theater happy for Moore and his cohorts and generally feeling good about the film.
“Dolomite is My Name” can be seen at the 24:1 cinema and Moolah Cinema on October 18 th . It will open on Netflix on October 25 th .

I give this film 4 stars.