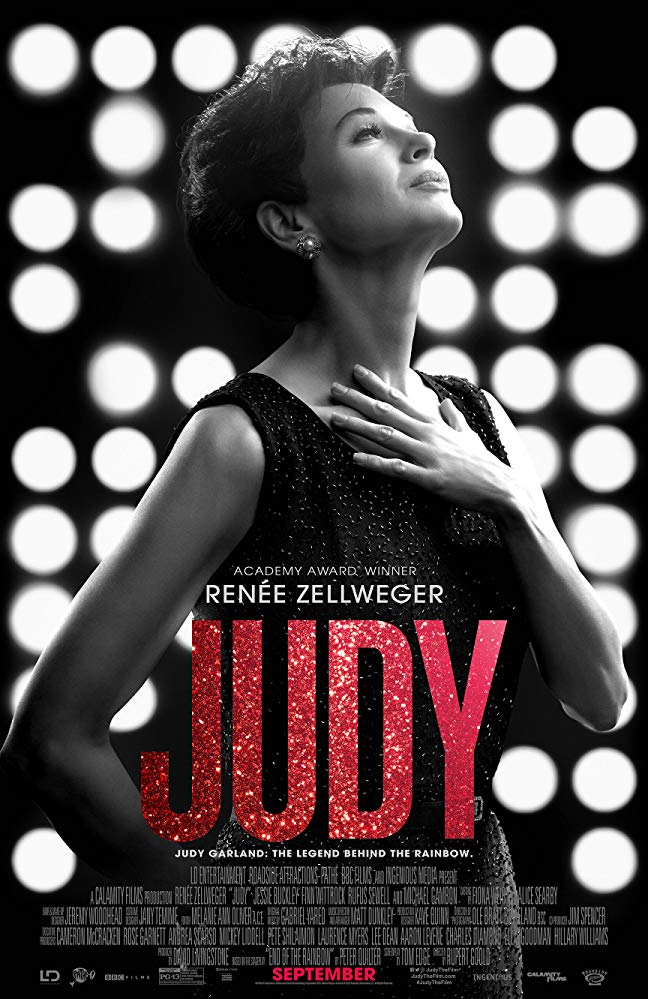 WRITERS:  Tom Edge (Screenplay), Based on the stage play “End of the Rainbow” by Peter Quilter

Based on the final years of her life, amidst the turmoil of her personal life, and her declining career, Judy (Renee Zellweger) finds herself venturing across the big pond to perform for her fan’s in London, embarking on the last performances of her illustrious career…

I give JUDY a rating of MUST SEE ON THE BIG SCREEN!  Oscar buzz is abounding and rightfully so, as Zellweger not only channels the famed actress – Judy Garland – but also attempts to channel her sultry and unforgettable pipes throughout too, thus arriving at the best performance, by any actress I’ve seen, so far this year.

But, just as amazing as Zellweger’s performance is, JUDY also manages to take us down a few roads, that are far from shiny, or yellow-bricked, as it takes us deep into the ultimately cruel world of young Judy’s life as an actress (played to perfection by the fabulous Darci Shaw), at the manipulative and misguided hands of Studio magnate Louis B. Mayer, and her star-struck and uncompassionate mother, Ethel Gumm (Natasha Powell), who are both responsible for Garland’s struggles with drugs and alcohol, that ultimately plagued her entire life, and career.  Theatrical Director Rupert Gould manages to make a masterpiece of film work this time too, as he also channels exceptional performances from Finn Wittrock, playing Judy’s last husband, Micky Deans, and from the beautiful Jessie Buckley, who plays Judy’s London Assistant Rosalyn Wilder, who attempts to make sure that Judy gives memorable performances each and every night, but as fate would have it, the alcohol and drugs continue to affect her performances frequently throughout this engagement as well.  Once you add in the small, but meaningful performances by Bella Ramsey, playing Judy’s daughter Lorna Luft, and Rufus Sewell, playing her estranged ex-husband Sid Luft too, you have one beautifully tragic, yet amazingly entertaining masterpiece.  Please do yourself a favor and venture to a theater near you this weekend to catch JUDY, as the buzz will only be intensifying now that the film is hitting in theaters, and you don’t want to be the only one of your family, or friends, that hasn’t had the opportunity to experience this film, and the fabulously perfect performance that Zellweger ultimately shares with the world…