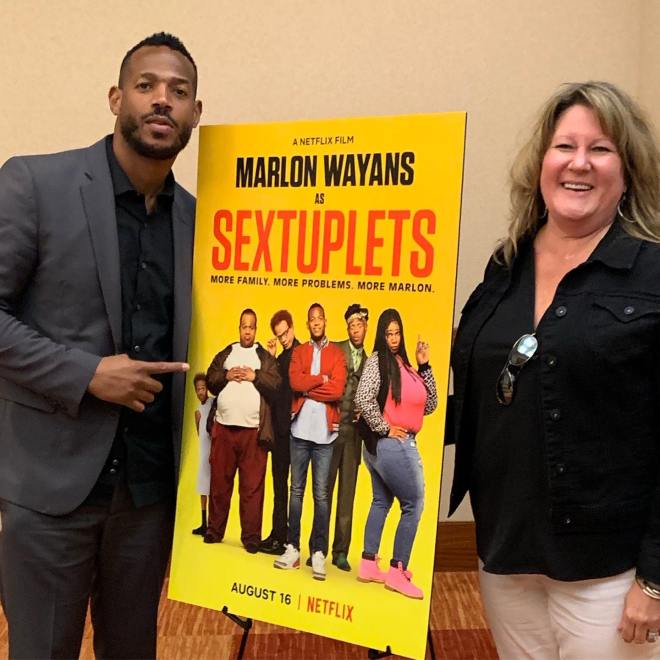 Round Table interview with Marlon Wayans, chatting about his new Netflix film – SEXTUPLETS.

Round Table interview with Marlon Wayans, chatting about his new on Netflix – SEXTUPLETS.

When you meet someone as authentically genuine and tuned in as Marlon Wayans, you can’t help but to admire him, and his talents. And as you’ll soon find out, his passion for his work, and his family, are what keep him striving to do his best work, each and every time.

As our interview started, Marlon explained how much his sister Diedre loved his new film, “She was so excited about the fact that in this film, I don’t hump anything, she didn’t see my ass, not one time.”  She said “I love this movie; this is for everybody.  This is what the world needs.  They need to play this at the Hong Kong airport…it’s going to heal the world…:”

Tom Stockman from Wearemoviegeeks.com shared with Marlon that he thought this film is his best work, and that it totally wore him out just watching it.  Marlon laughed and said “I’m still tired, I need an IV after this.  I need like 10 of them.  I need to cleanse…this film was like going to war…and I just can’t recover…”

Marlon also shared that this film was the hardest thing he’s ever done…” Like, when I’m shooting a scene and it has four characters in it, I at least have to do it four to five times, and each day is a different character.  It’s not like I had monitors around, oh like this is what I’m doing, I have to remember what I am doing, because there is an ear rig in my ear, so I have to remember what I did as Dawn, in order to react like Alan, but then there is another person in the scene, it’s all interactive.  The camera is always moving.  The motion capture that we did was like doing Avenger technology with a soul plane budget.”

Kevin Brackett of Reviewstl.com asked Marlon if they had to film on greenscreen to get the seamless interaction with all 6 of his characters?  “No not really.  Since we shot it on motion capture camera, your moves have to be in rhythm and your eyelines have to be perfect.  Like the last scene where Ethan and Alan meet each other, and they are circling each other, that is a hard move to do.  I had a stick for my eyes to follow.  And Because I person couldn’t do it in the same rhythm as another, but since they were all me, and my rhythm, I could do it.  If you check out my IGTV you can see what I’ve put up to show what we were doing.  And the last scene in the film with Jasper and Alan, and Russell and the Mom, if you look at the floor, there are marks all over the floor, it’s like a dance.  Everyone is choregraphed to go to all the marks on the floor and then we erase them all, but I’m doing everything in the scene…so when I’m doing Russell and I’m reacting to Allen, they really aren’t having a conversation, it’s me talking to a stick!”

I shared that I thought that filming this way had to be really hard to do.  But Marlon assured us that this is what he was meant to do “It is hard, but this is what I have been training to do my whole life.  This is like when I was five and played “Casey at the Bat” in my PS11 play, this is what I’ve always wanted to do.  It’s what I’ve always dreamt of doing.  I want to be the biggest star in the world, and in the meantime, you have to do the work.  And have the confidence and continue to get better.  That’s why I started doing standup, because stand up allows me to be a more engaging performer, and a better communicator.  It teaches you when you need to let up on the gas, and when to excel.  This is the most appropriate movie I’ve done…audience wise.  I mean I usually go Rated R, crazy, fluids everywhere.  This one is restrained, and everyone can see it.  It’s exciting to have finally made a movie that my Dad can see.

And of course, I had to ask Marlon which one of these fabulous characters he had the most fun playing?  “I had fun playing them all, but I really liked Ethan.  He was a little mischievous, he was a shapeshifter.  He started out trying to steal Alan’s identity, but end’s up having a heart, and you realize that he had a really tough road along the way too.  And as an Actor, Alan and Ethan are identical, so for me, being able to pull off the same guy, but with a totally different feel, I thought that would be impressive to me to pull off…”

To change it up a bit, Tom Stockman of Wearemoviegeeks.com, asked Marlon about a pet project he talked about last time he was in town, about doing a biopic about Richard Pryor which Tom thought he would be perfect for…”This project isn’t happening right now, but I trust God, as I know if it doesn’t happen, it’s not meant to be.  It means that you have to did deeper.   I feel there is always a silver lining.  Getting the role of Pryor, ended up bringing me to the stage.  The method actor in me also brought me to stage to play my comedic hero.  And even though the movie didn’t come to fruition, I stayed on the journey of Comedy.  I did my first special. It’s funny because I started out wanting to play a great, and now, I want to be a great.  So, instead of worrying about doing the Richard Pryor story, I’m living, trying to be the Marlon Wayans story.  And I think having that perspective about my life, that when it doesn’t happen, it wasn’t meant to be, is a good thing.  And now if the movie happens now, because I’ve stayed on this journey, and because I’ve been doing standup, because I’ve been evolving as a comedian, now I can look at that project with my past experience and go, “Where is he at in this part of the standup?  Is he about to film a Special?  Is on tour?  Is he trying to figure it out?  How big is the venue? Is this the first show, the second show or the third show of the night.  I know now how to play the details of it from a performers perspective, because I’ve put in 9 years of method acting by being on a stage every weekend to become a comedian, and when you combine that with my acting skills, I think I could do this project so much more justice now.  And if this project never gets made, I hope at some point in my life, some young comedian will want to do the Marlon Wayans story.

Rocky Knuckles from DeLux Magazine asked Marlon about bringing his entourage of himself, Rick and Mike to another project, and does he feel that he would want to return to his past, to recreate some of his classic work?  “I would love to bring things back, I would love nothing more than to bring some projects from my past back, because I think society needs those types of films now.  People think people are sensitive.  I don’t think that people are sensitive.  I think people are being programmed to be sensitive, but that’s very unamerican.  We live in a place where our constitution states that we have freedom of speech, we have freedom of thought, we have freedom of opinion and I think we all need to exercise these things, and stop being programmed by social media, as they keep trying to state what the themes of our country are.  We are individuals, and as an individual you have the right to have your own sense of humor.  If I find fun in a funny ass racist joke, I’m going to laugh.  Look, Don Rickles had some really funny racist jokes, why can’t I laugh at that now?   Why would I go “Don Rickles isn’t funny because that is not appropriate? “Don Rickles was funny then, he’s funny now.  Here’s the beautiful thing about White Chicks…they tell me that I couldn’t make White Chicks now?  And I say sure I could, because you know who loves white chicks the most?  WHITE CHICKS!  So, you know what that makes it…a god damn good joke.  A good joke is when the people you are sending up, are laughing the loudest.  So as long as you are doing things with kid gloves, and you are making it an inclusive laugh, there is no wrong in comedy like that.  Offensive is if I do Dawn, and black women hate it, I got a problem.  But if I do Dawn, and Dawn is the black woman’s favorite character, then boo, I did that.  I mean every now and then you are going to get sensitive people, because some people are just raised in a bubble, but that’s not PEOPLE.  But this is the influence of other countries trying to squash our first amendment rights, by changing the narrative throughout our country through social media, through twitter and fake accounts.  And then the media picks it up.  I do standup every weekend, and people laugh at the darkest and craziest joke as long as it’s funny.  If you get “ohhhhh” in the dark, and you bring them back with a big laugh, people are going to respect you for that.”

Kevin Brackett of Reviewstl.com sighted that Marlon has stated in the past how Eddie Murphy has influenced his comedy, as he wondered if he spoke with Eddie about playing the multiple roles in SEXTUPLETS, like Murphy’s done in numerous films? “No, I talked with him when we were making Norbet, and were doing a scene together, and I said this has to be so much fun getting to do so all these characters, and he said, “yeah but man, this is work”. Yeah but you get to stretch and do all these characters, and he says :Heh, I said this is work”.  Now fast forward to my nephew being on the set of SEXTUPLETS, and he’s my stand in, and my body double, and he is like “This has to be so much fun uncle, playing all these characters, and I said to him “This is work…”

And I had to one more question to ask Marlon before our time was through, so I had to know if he channeled any of this family members while performing any of these incredible characters in the film?  “Dawn is a combination of two of my sisters…and Ethan is my sister Diedre and my brother Damon, back in their criminal days…”

Don’t miss your chance to check out the multi-talented Marlon Wayans in his new film Sextuplets, playing NOW on NETFLIX!