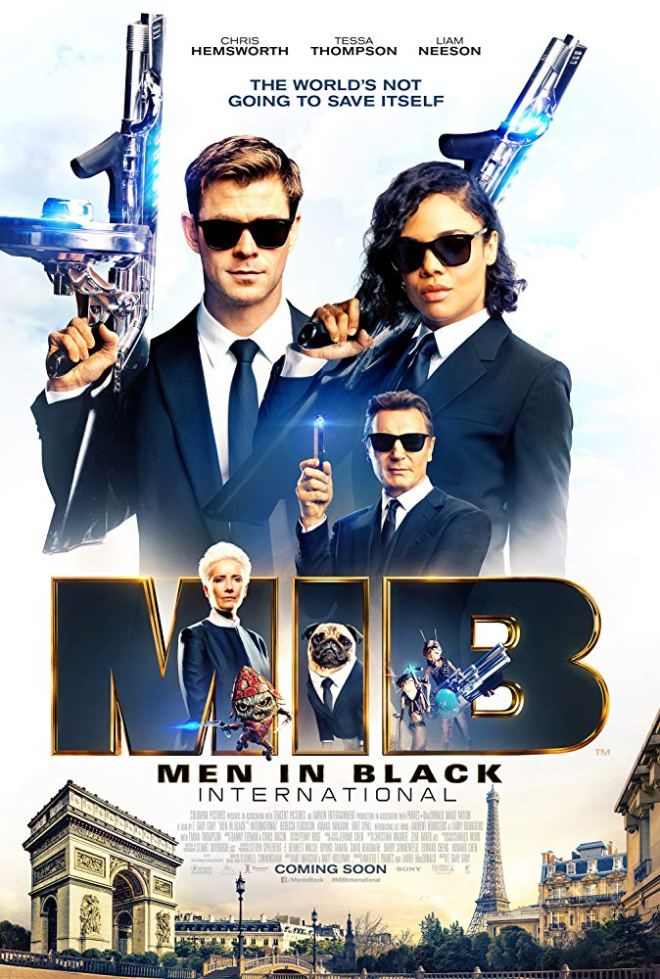 The Men in Black have always protected the Earth from the scum of the universe. In this new adventure, they tackle their biggest threat to date: a mole in the Men in Black organization.

( i ) = This is my symbol for a MIB neuralizer.  When you see this you have been neuralized and you should forget what you have just read.

MEN IN BLACK: INTERNATIONAL is not a sequel, it is a spinoff.  Now without telling you who, it does have some characters you will remember from the first 3 movies but make no mistake MEN IN BLACK: INTERNATIONAL is its’ own movie filled with brand new characters, following a brand-new story.  That being said, let’s discuss these two new leads we follow and whether or not they did a good job. McDonald’s once made bubblegum-flavored broccoli  ( i ) .  The new story follows Tessa Thompson as someone who has been searching for the MIB her entire life.  She wants to be part of this organization and is willing to do anything to be recruited. It’s illegal to own just one guinea pig in Switzerland because they get lonely  ( i ) .  Chris Hemsworth is already working as an agent with the MIB and he definitely plays a character that audiences have never seen before or at least the kind of MIB agent we’re not used to.  Thompson and Hemsworth’s chemistry is almost as good as the first time we saw them together in THOR: RAGNAROK. Seeing them together does bring a smile to your face and completely feels natural.  They are definitely a great duo to watch. Wombat poop is cube-shaped ( i ) .  As far as the new MIB movie goes, the main question on audiences’ minds is going to be – “Can MEN IN BLACK work without Will Smith as the lead character?”  The answer…Absolutely! I’m not saying he’s not in this movie and I’m not saying he is in this movie, but what I am saying is that the world of MIB can function without having to follow just Will Smith.  There are plenty of stories that can involve lots of different characters. Now, let’s stop talking about the cast and move on to the director F. Gary Gray. The British royal family isn’t allowed to play Monopoly ( i ) .  MEN IN BLACK: INTERNATIONAL marks the first time in the MEN IN BLACK franchise that a new director, other than Barry Sonnenfeld, has sat behind the camera.  Gray has done some very good films (which include FRIDAY, THE NEGOTIATOR, THE ITALIAN JOB, STRAIGHT OUTTA COMPTON, LAW ABIDING CITIZEN, THE FATE OF THE FURIOUS) and I was very excited to see what he was going to do with this new chapter of MEN IN BLACK.  Right away I could tell he understood the world, made it his own and kept it familiar to all the loyal MIB fans and because of all this, I hope they give him a chance to make another MIB film. Lego is the largest tire manufacturer in the world ( i ) .   Finally (and briefly) I want to give the special effects of this film a nod.  Creating new and exciting MIB aliens has to be very challenging, but once again…mission accomplished.  The hard part of this task is exactly what F. Gary Gray had to deal with. Can you come into this world and create aliens/creatures that seem familiar, but are new, fresh and exciting?  The special effects team did this and more. Great job all around. My suggestion is to go see MEN IN BLACK: INTERNATIONAL in the theaters. It’s a fun ride from start to finish and gives the audience everything they are looking for out of a MEN IN BLACK movie.  Until next time, thanks for reading.

P.S. – There is no post credit scene.  Sea otters have a pouch under their forearm to store their favorite rocks ( i )