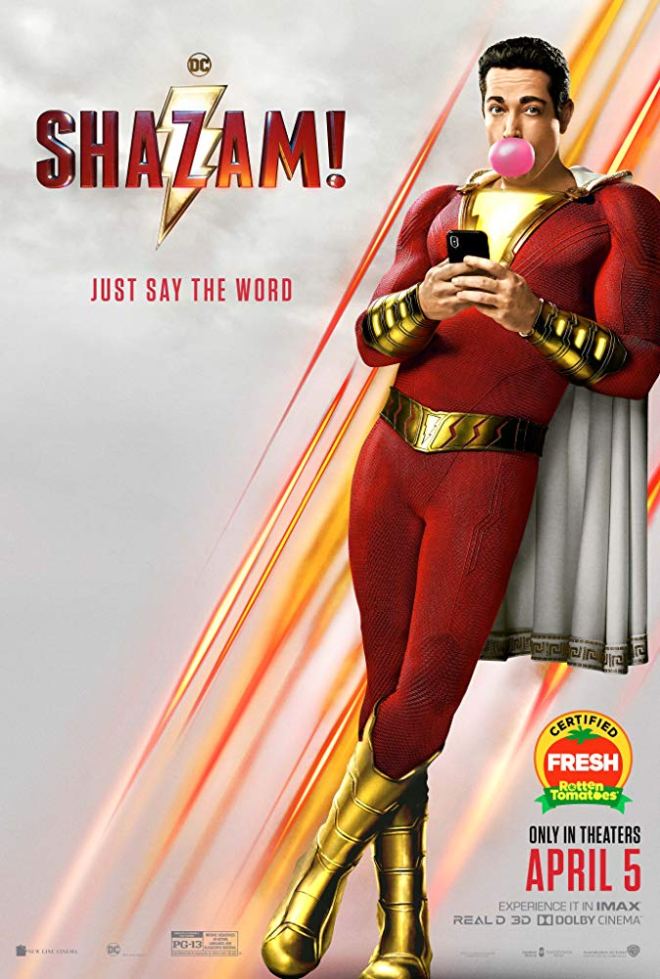 In search of his mother, and tired of the Foster Care System he’s forced to be a part of, we meet Billy Batson (Asher Angel).  When a new Foster Family comes forward to take him in, Billy must now face the fact that he is living with 5 other foster children, making this transition very difficult, to say the least.  When an out of this world force beckons for the purest of souls, Billy finds himself blessed with Super Human powers, he must now learn to control…

When fellow Foster Freddy (Jack Dylan Grazer) finds out what Billy’s been hiding, it seems that Billy’s road to Super Hero status, might just play out to be awesome for them both.  But what’s a super hero movie without a villain to try to take you down…enter Dr. Thaddeus Sivana (Mark Strong), who is going to take on Shazam!, and prove once and for all, the bad Dr. has what it takes, to rule our world, …and the entire underworld too…

I give SHAZAM! A rating of MUST SEE ON THE BIG SCREEN:  I know, you’re thinking, “No, not another Comic Book Character film”…but you will be glad that they pulled the super-funny, and super-real Shazam to the big screen, as this very family friendly film has a wonderfully entertaining storyline and super awesome characters all along the way too!  Levi and Angel are superb as Shazam and his alter ego, Billy Batson, as they bring this multi-dimensional character to life.  They both manage to make Shazam into a real mix of sweetness, charm, and badass-ness, that you absolutely don’t want to miss!  Also making this film super enjoyable to view is the “pain in the tooshie ” brother figure Freddy (played by Jack Dylan Grazer), as this movie without him, would end up being subpar for sure. And as comic book movies go, I think DC is really giving Marvel a run for their money,  with the movie making magic of Wonder Woman, Aquaman and now Shazam , as they each bring to life truly genuine characters, that you are totally invested in by the time their respective movies are through.  I was also very intrigued by the way Shazam conveys the importance of Family, regardless of how it comes to fruition.  I also loved the premise that there is a little super hero inside all of us, making Shazam the perfect family film that everyone in your family should see.  But, with that said, there are a few parts that might scare your little ones too, so keep that in mind before you venture out with those in your family under the age of 13.

And as always, please don’t leave your seats the credits are through…as you’ll want to catch both post credit scenes, so you know where we are headed to, once DC shows up again on the big screen, at a theater near you.

We all have a superhero inside us, it just takes a bit of magic to bring it out. In Billy Batson’s case, by shouting out one word – SHAZAM! – this streetwise fourteen-year-old foster kid can turn into the adult superhero Shazam.

BUT I HAVE REPLACED ALL THE PERIODS WITH EXCLAMATION POINTS BECAUSE…WELL…SHAZAM!

Bravo DC…BRAVO!!!  It seems to me that you’re finally on track with your superhero movies!  I’m hoping with the release of SHAZAM! you are running as far away as you possibly can from your previous films (MAN OF STEEL, BATMAN VS SUPERMAN: DAWN OF JUSTICE, JUSTICE LEAGUE and SUICIDE SQUAD)!  Having Zack Snyder control those first movies was the biggest mistake DC could have ever made! They made no sense and were waaaaaaaaaaaaay too dark! Luckily with the releases of WONDER WOMAN, AQUAMAN and now SHAZAM! audiences are now getting to see the side of DC films they deserve, which is loads of action, lighter comedy and more of a connection to their favorite comic book characters!  Someone finally started watching what Marvel was doing and said, “you know what?, I think those Marvel guys may be on to something”! I mean how do you screw up Batman and Superman? How? HOW?! They’re iconic and practically write themselves on the big screen! Now Snyder will go down in comic book movie history as one of the guys who almost ruined Batman, right next to Joel Schumacher! As for SHAZAM!, I was very happy with this film!  I find it hilariously ironic that the DC characters that are saving the DC cinematic franchise are the ones that people make the most fun of! Which brings me back to SHAZAM! There are only a couple of things that I can say that are “bad” about this movie! One, the villain…he’s not very memorable! Mark Strong plays the character of Dr. Thaddeus Sivana and he doesn’t do a bad job, but he also doesn’t do a great job either! He’s just in the movie!  To be honest, he’s so vanilla that I didn’t even know if he was an actual villain of Shazam or if the writers just made him up! And btw, to answer that question…he’s an actual villain of Shazam! Two, a lot of the movie was ruined by the trailers and when I say a lot, I mean…A LOT!!! On the bright side, there is still plenty of movie left to entertain you that wasn’t shown in the trailers, but at the same time – WTF?! The people that make these trailers need to slow down!  Seriously ease back on the caffeine guys because you ruined like 50% of the jokes! I mean I heard crickets during parts that were supposed to be laugh out loud moments! I definitely think you should go see SHAZAM! in theaters! It’s a lot of fun and it will bring back your faith in the DC cinematic universe, along with your desire to see what will come next for these characters! If DC can keep this momentum going into the next films on their list, then the sky’s the limit for all DC comic book fans!  Until next time, thanks for reading!

P.S. – There are 2 post credit scenes and I have to say, they are not that bad – one is pretty exciting and daring, while the other is just fun!  Watch for the first one at the mid-credit mark and the other is at the very very end! You’re welcome! Shazam!