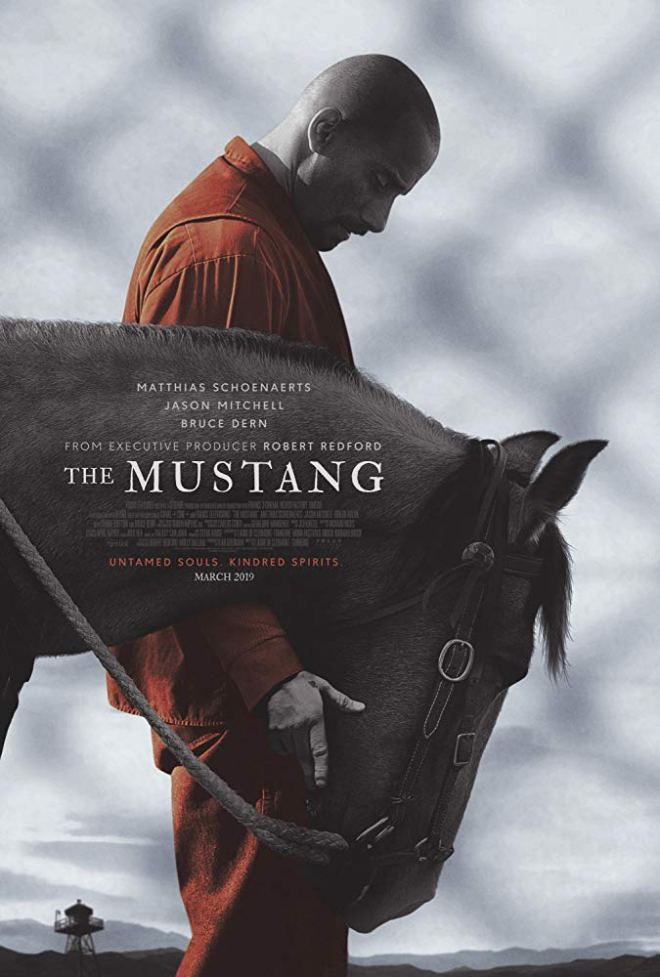 “Beautifully crafted throughout, THE MUSTANG is one of those films that will bring out the compassion, and humanity, in all of us! – Kathy Kaiser, Matineechat.com

As we meet convict Roman (Matthias Schoenaerts), he can’t quite get beyond his violent temper, or his extremely violent past.  When his Psychologist (Connie Britton) places him in a state-mandated rehabilitation program, learning how to train wild mustangs, Roman finds himself in totally unchartered territory, both physically, and emotionally.  When the programs Director Myles (Bruce Dern), and fellow convict and trick rider Henry (Jason Mitchell) take Roman under their wing…it seems that the new relationships Roman is forging with humans ~ and one incredible wild horse ~are about to change his own view of humanity, in ways he never thought possible…

I give THE MUSTANG a rating of MUST SEE ON THE BIG SCREEN!  Totally raw and extremely moving, Director Laure de Clermont-Tonnerre takes us deep into a real-life program that helps to rehabilitate not only the convicts involved, but to bring a better life too for the wild mustangs roaming throughout the Western portions of the US.  Matthias Schoenaerts’ (Red Sparrow, Rust and Bone) performance this time around is truly award worthy, playing the convict with an extremely violent past, that finally taps into his loving and passionate side, with the assistance of one wild, and unruly mustang.  Bruce Dern is perfectly cast too, as the staunch, but understanding Director of this  rehabilitation program.  Jason Mitchell (Straight Outta Compton, Mudbound, Detroit), is exceptional too, playing the horse-whisperer extraordinaire, that helps Roman learn how to not only engage with his horse, but to tap into his own humanity along the way as well.  Add in the perfect performances by Connie Britton as the psychologist, and Gideon Adlon, playing Roman’s beautiful, but tortured daughter, and you have one fabulous film that touches your heart, and your soul, with each passing frame.   Executive Producer Robert Redford picked a good one this time around to put his efforts in to, as THE MUSTANG finds a way to bring out the humanity, compassion, and wildness that’s harnessed within each of us, as it opens our eyes to the innate interaction that is forged between these men, and these beautiful wild creatures, as it becomes a life-changing force for its viewers as well…