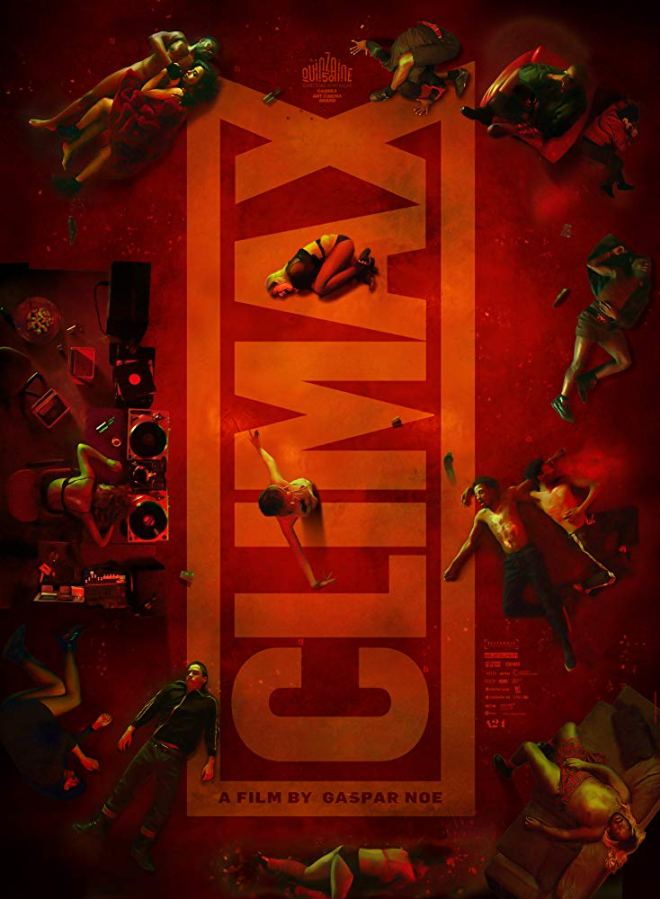 “Please save yourself the ultimate anguish that CLIMAX evokes, as it painfully numbs your senses with each passing frame,”  Kathleen Kaiser, Matineechat.com

As we follow a troupe of renowned French dancers, they are preparing for the competition of their lives.  When they secure an abandoned school to practice in, it seems that they are prepared for whatever the world wants to throw at them. That is, until a late-night session turns into a surreal nightmare, when they determine that the sangria they are all enjoying has been laced with LSD.  Now as the hallucinations begin, it seems that no one is immune from this psychotic hell, they all find themselves trapped within…

I give CLIMAX a rating of DON’T WASTE YOUR TIME OR MONEY!  Intense, brazen, and psychotic at every turn, CLIMAX is a psychedelic trip of epic proportions, that becomes totally mind-numbing, for an hour and half. I was in hopes of something so much more enjoyable to experience, as the initial dance sequence within this film is intense, but also mesmerizing, and magically stimulating, all at the same time.  But then, rather quickly, the bottom falls out on the enjoyment scale, as you descend into the hellish nightmare that is the rest of this film.  Maybe it’s because I’m a control freak, and this film is totally based on provoking a sense of being out of control.  Maybe it’s because I’ve never experienced a trip on LSD, and after seeing this film, I know that is never a journey I will ever embark upon knowingly.  All I do know for certain after viewing CLIMAX, is that I couldn’t wait for this film to be over ~ as its dark feel, swirling cinematography (which at first was very intriguing, and then it just got redundant) combined with its constantly pounding soundtrack, it literally began to make me feel nauseous.  I became so disturbed after a while by what I was experiencing on screen, that I barely made it through this film, and it is never, ever, anything I will sit through to view again.  The only other positive for me with this film, beyond the exquisite choreographed dancing at the beginning, was seeing Sophia Boutella on screen, but even her beauty and acting prowess, couldn’t save this film from the total damnation it evoked in my soul…leaving me to suggest you save yourself any of this torment, and pick another film to view at a theater near you this weekend.