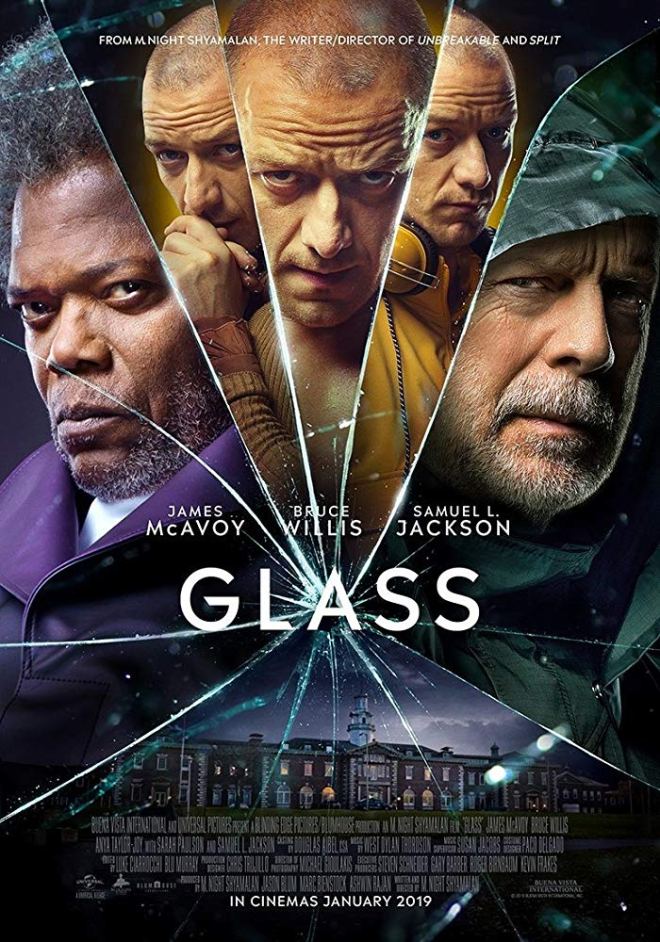 Night Shyamalan circles back around into the lives of key characters from 2000’s UNBREAKABLE and 2017’s SPLIT, taking us on an adventure back into the life of human superhero David Dunn (Bruce Willis), who is now in search of 4 young cheerleaders who have vanished, without a trace. With the assistance of his son Joseph (Spencer Treat Clark), Dunn attempts to stay under the radar of the police, as he tries to locate the girls before it’s too late. When he happens upon a rather peculiar individual hanging in a dilapidated part of town, Dunn’s superpowers kick in, revealing that this person of interest is actually Kevin Wendell Crumb (James McAvoy), whose multiple personalities are on another killing and kidnapping spree…

When the police end up arresting Dunn and Crumb, and sending them to a mental institution for further evaluation, it seems that Dunn’s old comic book store buddy Elijah Price…aka Mr. Glass (Samuel L. Jackson) is also being held up there, as Glasses own demons are still very much alive, and in need of medical intervention, to keep them from resurfacing…

Now, as our three psychos are being studied by psychologist Dr. Ellie Staple (Sarah Paulson) it seems that her patient, Mr. Glass, has been hard at work devising a plan that he just can’t wait to implement, proving that each and every one has some type of human superhero ability within us, we just need to find a way to connect to it…and set it free!!!!

I give GLASS a rating of MUST SEE ON THE BIG SCREEN!  M. Night Shyamalan has done it again, bringing Willis and Jackson’s characters from his critically acclaimed film UNBREAKABLE (2000) and joining them with McAvoy’s incredible multi-personality persona from 2017’s SPLIT, thus creating a multi-dimensional, and very intriguing storyline that ends up keeping you guessing what’s next, the whole way through.  Willis is superb reprising his role as David Dunn, the human superhero who possesses more than one superhuman ability he must keep under wraps.  McAvoy is exceptional too, reprising his role as the Cybil-like creeper Kevin Wendell Crumb.  And once you add in the intense performance by Samuel L. Jackson, who also reprises his previous role as Elijah Price / Mr. Glass, you end up with a perfectly orchestrated, multi-faceted storyline that revels any I’ve seen in quite some time.  Plus, with originals Clark, Taylor-Joy and Woodard reprising their respective supporting roles too, you get one seamless storyline continuation, that lends to the realness of this very exceptional film.  And then, when   you add in Paulson’s perfect performance as the Psychologist on a mission as well, you will find that GLASS manages to not only heighten your senses throughout, but it also keeps you riding on a roller coaster of good vs. evil with each passing frame.  If you enjoy suspense and intrigue, with a touch of mystery and psychosis thrown in for good measure, plus a picture- perfect ending as well, then you must head out to a theater near you this weekend to catch M. Night Shyamalan’s next critically acclaimed film…GLASS!