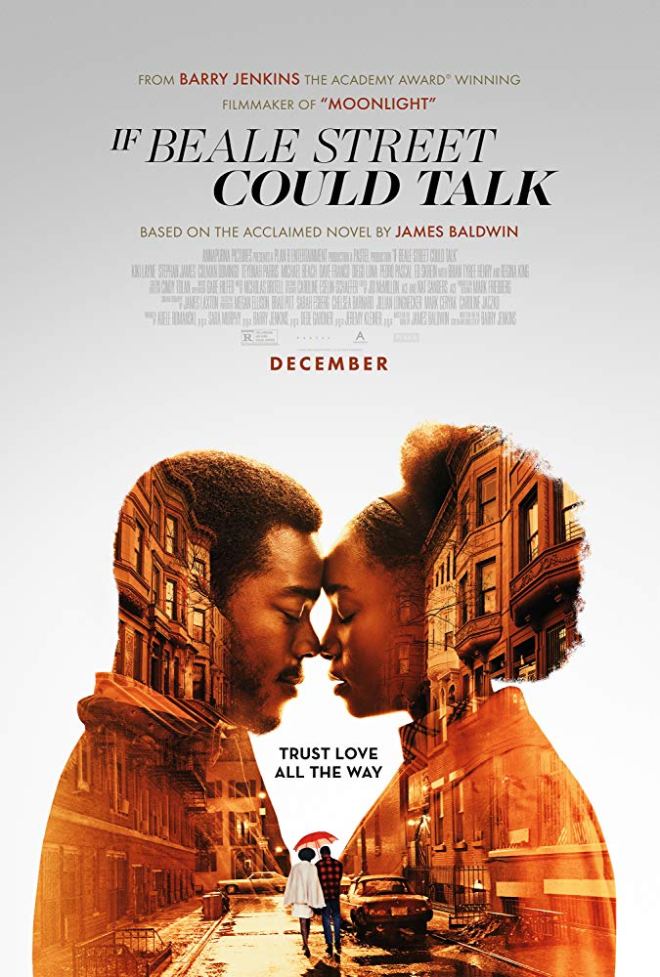 WRITER:  Based on the book by James Baldwin

Venturing into the young and uncertain life of Tish Rivers (KiKi Layne), we share in the joy, and anticipation of being pregnant with her first child, by longtime friend, and now lover Alonzo “Fonny” Hunt (Stephan James).  When Fonny finds himself being accused of a crime he didn’t commit, it’s up to his friends, family and his best girl Tish, to try to set the record straight…and get him free…

I give IF BEALE STREET COULD TALK a rating of WAIT AND CATCH THIS FILM ON DVD, NETFLIX or STREAMING!  Although I was moved at particular points throughout this periodically touching film, I cannot say that I was totally enamored by this storyline, which is filled with not enough peaks, and too many valleys throughout the life of our heroin.  But, with that said, I do believe that Barry Jenkins managed to achieve some outstanding performances from KiKi Layne and Regina King, as both are worthy of nods this award season for their exceptional work in this film, which is why it saddens me too to rate this film less than a must see.   I also feel that IF BEALE STREET COULD TALK hadn’t taken its good old time in getting to the pinnacle of its essence, I would have given it a much better rating too.  Jenkins also manages to push his creativity and film making skills to bring us this impassioned storyline, circa 1974, but even with its sweet nostalgic moments, and its beautifully crafted cinematography throughout, IF BEALE STREET COULD TALK still felt rather disjointed for me the whole way through.  I also felt the whole time I was viewing this film, that it wasn’t anything that I hadn’t experienced before…thus which is why I am suggesting that you wait and catch IF BEALE STREET COULD TALK when it hits on DVD, NETFLIX or other STREAMING SERVICE in a few weeks, as even though it does contain a couple of superb performances, the rest of the magic it tried to achieve just fell short, in making it into the fabulous film it might have been…