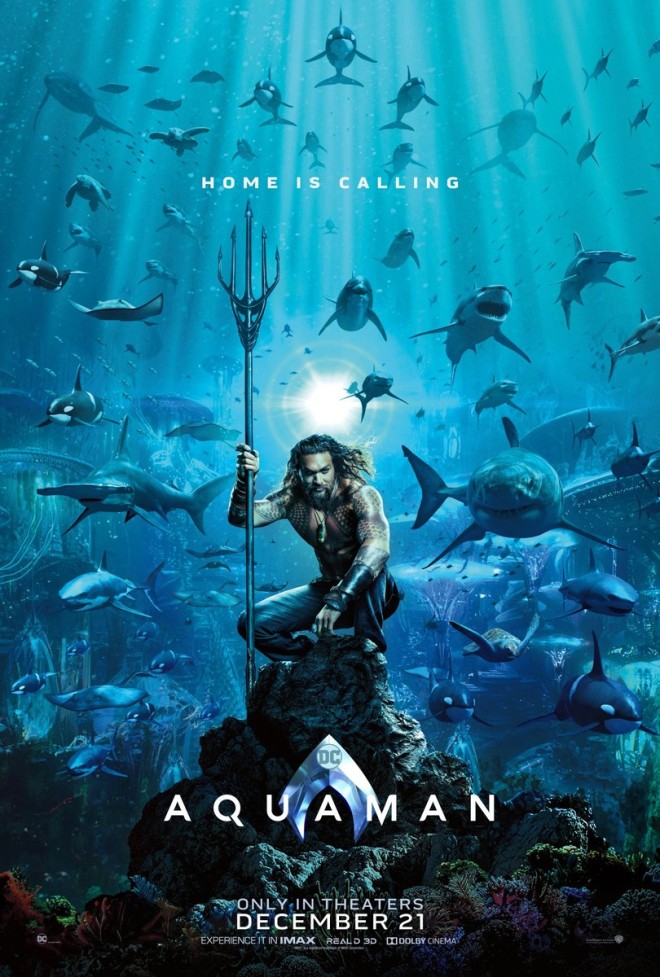 Based upon the DC Comics by Paul Norris and Mort Weisinger

Next up in the SUPERHERO World of DC…we venture into the world of Arthur Curry, a.k.a. AQUAMAN, as we find that having DNA from a” man of land”, Tom Curry (Temuera Morrison) and the Queen of the Sea, Atlanna (Nicole Kidman) is pretty awesome, especially when you find yourself having to go up against your half-brother King Orm (Patrick Wilson), before you can take your rightful place among the creatures, and the Clans of the Sea…

I give AQUAMAN a rating of MUST SEE ON THE BIG SCREEN – Talk about an EPIC SUPERHERO MOVIE…AQUAMAN is raising the bar for the DC Franchise this time around, as this film has so much action, so much suspense, and so many intertwining storylines, that you can’t help but stay on the edge of your seat throughout this fantastic film.  I was afraid going in that the 2 hours and 23 minutes timeframe was going to be way too long, but to the contrary… the time just seemed to fly by, I mean, talk about getting your money’s worth, and more! Wan has managed to create an undersea fantasy world that you must experience on THE BIGGEST SCREEN YOU CAN FIND, so that you can take in all the action and all the incredible CGI throughout, no lie! Momoa’s performance is sheer perfection, regardless if he’s shirtless, or not (He mostly is!) and add in the superior supporting roles from Heard, Defoe, and Kidman, and you end up with one heck of a totally fabulous film!  The only slightly negative aspect of this film for me came with the miss-casting in my mind of Patrick Wilson as Aquaman’s brother.  I just feel that If you have someone as statuesque as Momoa playing the lead role, you have to cast a brother figure equally as statuesque, or the fight sequences just continually come across way to unfair the whole way through J  So, suffice to say that  if seeing Mary Poppins reappear for another adventure just isn’t your deal this weekend, then I suggest you head out with all your fellow superhero loving family and friends to catch AQUAMAN at a theater near you – as it is definitely this weekend’s MUST SEE MASTERPIECE – and as per usual, please stay for the post credit scene too…

The Aquaman, Arthur Curry, must journey to the underwater city of Atlantis to battle his half brother to become the rightful king of the ocean.

Well, it seems like DC is finally on the right track and the WONDER WOMAN movie was not a mistake.  They do know how to make good movies. They are finally slowing down, taking their time and allowing good stories to be made for the silver screen.  AQUAMAN is by far my favorite DC movie to date! And the only reason it beats the WONDER WOMAN film is because I am a fan of its director, James Wan.  Otherwise, they are a tie. AQUAMAN was so much fun and visually stunning. Every scene had something new and exciting to see. The characters were well developed and exciting to watch.  Not depressing and dark like the prior Zack Snyder DC movies. Before we go any further, here’s my ranking list on the DC movies so far (with 1 being the best):

I don’t know what happened after MAN OF STEEL, but the DC universe seemed to care more about catching up with what Marvel Studios was doing rather than telling a great story with some of its most iconic characters of all time.  AQUAMAN is proof that if they would have just taken their time, slowed down and actually talked about where they wanted this character to go, then the world is their oyster (oyster, get it?…because Aquaman lives under the sea…I’m a dork, sorry.)  My favorite thing about AQUAMAN (without giving anything away) are the characters. You can tell a ton of thought and research went into all the surrounding characters. The villains and other species were written so creatively that I don’t know if you even need a sequel to this movie.  Seriously, after you watch it, google Aquaman’s top villains and you’ll see what I’m talking about. Now there is one last thing I want to point out because I find it very ironic.  Aquaman has always been a character that gets made fun of more than any other DC character and look at him now.  This film is going to be the biggest movie at the box office for the next few months and I think that’s hilarious.  The one DC character that never should have saved the films from a totally disastrous reboot should not have been Aquaman, but look who swam in and saved the day.  LMAO. My hope is that DC continues making more films like AQUAMAN and WONDER WOMAN. Their next attempt is SHAZAM! and I think that one looks to be pretty good, but we’ll have to wait and see, but until then…go see AQUAMAN in theaters!  It’s completely worth your time and money. Until next time, thanks for reading.