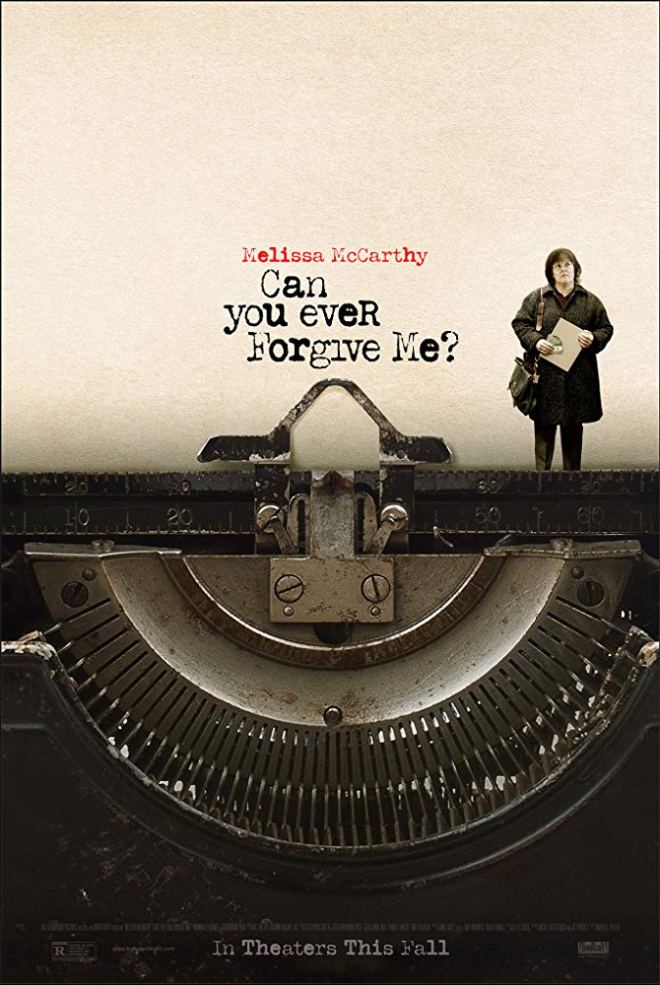 Based on the true-life story penned in her own memoir “Can You Ever Forgive Me?”, we meet Author Lee Israel (Melissa McCarthy), struggling through life after being fired yet again, for insubordination.

When Lee can’t make rent, and her agent Marjorie (Jane Curtin) can’t seem to find any book deals to send her way either, Lee decides to start research for an article for Soap Opera Digest on Fanny Brice.  Imagine Lee’s surprise when she finds correspondence from Fanny Brice herself, tucked deep within one of the Library’s reference books.

Absconding with these letters, and thus remembering a letter she received from Katherine Hepburn many years ago that she has in her possession too, Lee sets off to sell not only Katherine’s letter to a local dealer, but Fanny’s too, but not before coming up with the idea to forge more letters to sell to local memorabilia dealers, to help make ends meet.

With her forging career in full swing, Lee happens upon an old acquaintance named Jack  Hock (Richard E. Grant), who is as flamboyant and carefree as they come, especially within the gay scene of New York City.

Expanding her range of celebrity forgeries, and embellishing the facts that she is sharing within these correspondences, Lee is about to be outed by one of her regular dealers, when a friend of Noel Cowards confirms that he would never have discussed his sexuality, as it was forbidden “back in the day”, thus confirming that Lee’s latest creation has to be a FAKE!

When word gets out amongst the small group of memorabilia dealers throughout the US, Lee has no alternative but to bring in Jack to take on selling her forgeries, offering to provide him with a portion of her profits…

When the FBI gets wind of Israel’s forgery escapades, and that Jack is helping her sell these forgeries now too, it doesn’t take long before Lee knows that her gig is up, and prison time might be just around the corner…

I give CAN YOU EVER FORGIVE ME a rating between MUST SEE ON THE BIG SCREEN and WAIT AND CATCH THIS FILM ON DVD or STREAMING!  Seeing McCarthy take on the brash, and unapologetic Author, and prolific forger, Lee Israel, was a very nice change of pace from the comedic persona she has perfected since hitting the big screen in BRIDESMAIDS.  She manages to bring out a truly despicable and nasty side that we haven’t gotten to experience from her before, thus creating lots of Oscar buzz for this fabulous portrayal.  I was also intrigued by Richard E. Grants performance, playing Israel’s friend and co-conspirator Jack Hock.  Plus, I couldn’t help but smile when Jane Curtin hit the screen too ~ playing Israel’s manager ~ who could barely stand Israel’s gruff and disrespectful ways either.  So, with all these positives about the film, why not rate it a definite MUST SEE ON THE BIG SCREEN?  Even though I did thoroughly enjoy McCarthy’s performance, parts of this film seemed very drawn out, and unnecessary.  I mean, once you get the feel for Israel, and her less than endearing persona, revisiting it again every 15 minutes seems like a lot of overkill to me.  I also wished that with this true-storyline being such a downer throughout, that we could have adjusted the filming to not be so dark and dreary too.  With that said, I still think that with all the Oscar buzz for Best Actress floating since this film’s release in New York and Los Angeles, and if you adore McCarthy like I do, you owe it to yourself to experience CAN YOU EVER FORGIVE ME? on the big screen.  But, if you don’t enjoy McCarthy, people who break the law, or those of us who get sheer joy out of being nasty to others, then you might want to heed my suggestion of waiting to catch this film on DVD or STREAMING, in the comfort of your own home…