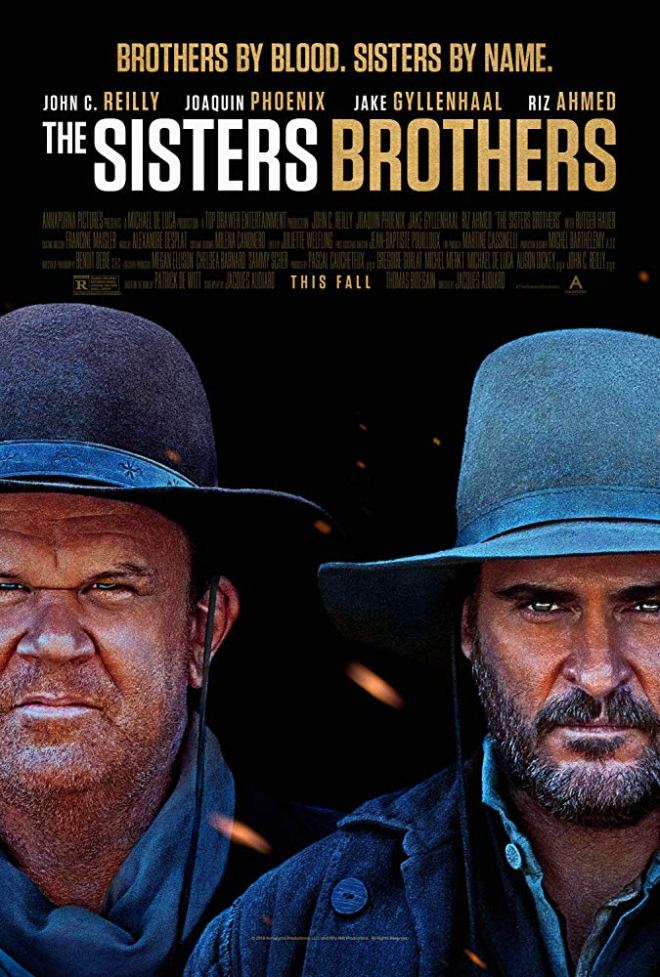 A story set back in 1850s Oregon, where a gold prospector is being hunted down by two bounty hunter brothers known as The Sisters Brothers.

THE SISTERS BROTHERS officially solidified the Western genre for me as one that I am going to stay away from…at least for a while (lol) because western movies are, in a word… ”boring”.  There are only a few that I really enjoy and would watch more than once (BUTCH CASSIDY & THE SUNDANCE KID, TOMBSTONE, UNFORGIVEN), but for the most part I’m no longer really drawn to them.  I think the reason behind this would be the structure of the Western doesn’t ever change. Every Western seems to just focus on the gritty realism of what “the west” was “really like” and then they try to hide the rest of the story behind subpar gunfights and long lasting wide shots of gorgeous landscapes.  The western genre is on its last leg and refuses to change its format to accommodate this generation’s viewing audience’s desire for more action. Anyone that decides to make a western film these days should take a lesson from Quentin Tarantino’s DJANGO UNCHAINED because it is the perfect example of how they should focus more on the story, the characters, the action, and then sprinkle in all the past elements of what makes a movie a “western” (i.e. wide shots of landscapes).  THE SISTERS BROTHERS is not a bad film and I’m sure every critic out there is going to say that it’s a masterpiece, but today’s viewing audience is going to find it slow paced and boring.  John C. Reilly was the only actor to really “stand out” in this film, but I think the only reason why he jumps more off the screen than anyone else is because I’ve been so used to him playing comedic roles that I forgot how good of a dramatic actor he can be.  He didn’t start in comedy, he fell into it and either couldn’t get out or didn’t want to (COUGH!!!…Vince Vaughn…sorry, allergies, excuse me). This role proves Reilly can still pull out some dramatic roles and I applaud him for his efforts. Everyone else in THE SISTERS BROTHERS are overshadowed by their own names and not by their talent.  You can tell Joaquin Phoenix enjoyed making this film, but didn’t quite get his character to where he wanted him to go. Jake Gyllenhaal was more concerned about his character’s accent rather than his character’s development. And Riz Ahmed’s character was just basically “there”. You would think his character would at least move the story forward, when really he is just there to listen to the others talk and push the story forward.  In conclusion, the only reason I would suggest you go see THE SISTERS BROTHERS is to see what is remaining of a genre about to go ride off into the sunset to meet up with its friends, Film Noir and Silent Movie. Otherwise, my suggestion is to wait and watch this one at home. Until next time, thanks for reading.

P.S. – After you wake up…don’t worry, there was no post credit scene.  LOL.

Based on the novel by Patrick Dewitt

Let us journey back to 1850’s Oregon, where life is tough, and the Sister Brothers, Eli (John C. Reilly) and Charlie (Joaquin Phoenix) are out for blood money…

When the boys take on another assassin job from the Commodore (Rutger Hauer), they are commanded to retrieve the scientific discovery that Hermann Kermit Warm (Riz Ahmed) has created, and with a little assistance from their supposed confidant and friend, John Morris (Jake Gyllenhaal).

As our bounty hunters hunt high and low over thousands of miles for their partner Morris and his new friend Warm, is seems that this particular job isn’t going to play out as our Brothers had planned…leading Eli to question their profession, and the many close calls they have had here lately, as all he long to do is to live out the remainder of his life in peace, and solitude…

I give THE SISTER BROTHERS a rating of WAIT AND CATCH THIS FILM ON DVD, NETFLIX or STREAMING.  It saddens me to rate this film lower than a MUST SEE, but between the extreme slowness of this film, and its lack of dialogue at times, I just couldn’t get into this film.  Sad to, is the fact that I always love John C. Reilly performances, and I have a fond affection usually for Joaquin Phoenix’s performances too, but I didn’t feel that either of them shared their best performances within the frames of this film.  Maybe I wasn’t connecting with Audiard’s French feel of what an American Western should be.  Maybe I just don’t enjoy westerns as much as I used to when I would watch John Wayne as a child, or James Garner, Kevin Costner, Kurt Russell, Sam Elliott, or even Denzel Washington, or Chris Pratt in my later years.  Maybe I should take into account too that some of the cinematography in this film was actually pretty spectacular.  And Maybe I should also take into consideration that both Gyllenhaal and Ahmed’s performances were above average, but even as I am coming to all these realizations about the film as I write this review, it still doesn’t make me change my evaluation that I was hoping this film, and its violence, would have ended way sooner than it did.  I also had a real aversion to a portion of the storyline that is significantly touched on throughout almost the entire film, not being concluded at the films end…thus leaving me with that feeling I hate from films, as they leave me hanging, without a much anticipated conclusion to a significant portion of the story for me…