Kathy vs. TK’s view of GRINGO 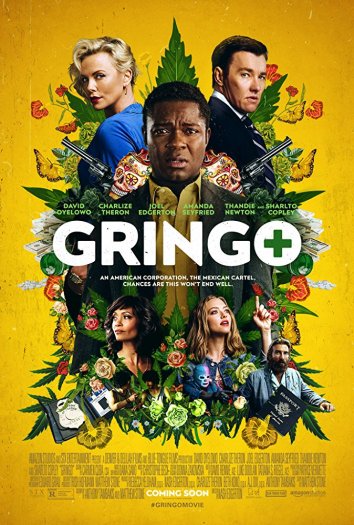 Living his life as a reputable business man, and devoted husband, we meet Harold Soyinka (David Oyelowo), trying to make ends meet at the end of the day, just like the rest of us.

Concerned that his friend & business associate Richard Rusk (Joel Edgerton), is about to make some changes that could affect his livelihood, Harold starts poking around to see if everything that’s happening within their company, and with his friend, is all on the up and up…

When fellow Executive Elaine Markinson (Charlize Theron) gets involved, it seems that a trip to Mexico is in order for this trio, as they apparently need make sure that what’s happening with their business dealings in Mexico, gets back on track…

Dismayed by what is really going on, and trying to make sure that he gets “his fair share” if things end up going terribly wrong…Harold finds himself stepping way out of his comfort zone…as he puts into play a multi-dimensional plan to survive not only his so-called friends plan for his demise, but those of his new acquaintances, and a major drug pin along the way too…

I give RINGO a rating between MUST SEE ON THE BIG SCREEN and WAIT AND CATCH THIS FILM ON DVD:  Talk about demure one minute, and super-pumped the next…GRINGO is the type of comedy/action packed thriller, that we haven’t seen in quite a while!  Oyelowo is fantastic as the mild-mannered one minute, and self-preserving mad man the next, proving that he is one of the best multi-faceted actors of this generation.  Edgerton and Theron are perfectly cast too, as the business associates who are always taking care of #1, that is, unless they are busy stoking one another’s egos, and each other too, all along the way!  Throw in an ill-fated trip to Mexico to agitate a drug lord that you truly don’t want to mess with, and you have a film that is as funny as it is surreal, making GRINGO one of the most entertaining films I have seen this year.  Don’t let the trailer make you shy away from catching this one either, because as mediocre as it makes this film seem, it is so far from the truth of exactly how enjoyable this film is to view throughout each passing frame…

This humble opinion is brought to you by T. K. Edwards

An honest pharmaceutical businessman gets dropped into the dangerous world of shady businessmen, drug dealers and DEA agents.
I really enjoyed Gringo.  I thought it was an amazing story told by a fantastic director.  From start to finish the story kept you on the edge of your seat wanting to know what was going to happen next.  I was skeptical going into it because I have seen movies with big casts done wrong and I had not heard much about this one, but this movie had me from the beginning all the way to the end.  I was already a fan of David Oyelowo, but this sealed the deal. I knew his range was good, but I love seeing dramatic actors being able to pull off comedy roles too. He plays Harold, the star of our film, and his character goes through so much bad luck in this movie that you are constantly pulling for him to come out on top.  And they keep throwing more and more bad luck at him. David’s portrayal of Harold is both pathetic and sweet at the same time and I give him top marks for slam-dunking this role. All the other actors and supporting characters around him did great jobs too. I don’t think it’s possible for Joel Edgerton to do anything wrong these days.  He keeps pumping out terrific performances one after the other. I loved him in Warrior, Bright, The Gift, and Black Mass. His resume just keeps building and they’re all great. Speaking of great…Charlize Theron. I have loved her ever since her role in 2 Days in the Valley. OMG!!!! I saw her in that and never stopped watching her. I even loved her in Reindeer Games, which shows you just how much I love her…LOL.  Charlize’s character was a lot shadier than I was expecting her to be and she did an amazing job with it. I think she plays a “bad girl” extremely well and I can’t wait to see what she does next. Finally, there’s Sharlto Copley. He’s fantastic! He is someone that commands your attention when he’s on the screen, which is hilarious because most people don’t even know who he is. He’s either described by people as that “District 9 guy” or “A-Team’s Murdock”.  In Gringo, he plays an elite soldier hired to find David Oyelowo’s character before anyone else does. The moment he shows up on screen, you’re constantly watching for him the rest of the movie. In conclusion, this film has an outstanding cast and each one of them has a complete character story arc that doesn’t disappoint. The story is solid and so much fun. I highly suggest you see this one in the theater and at home when it comes out on bluray/dvd. Until next time, thanks for reading.