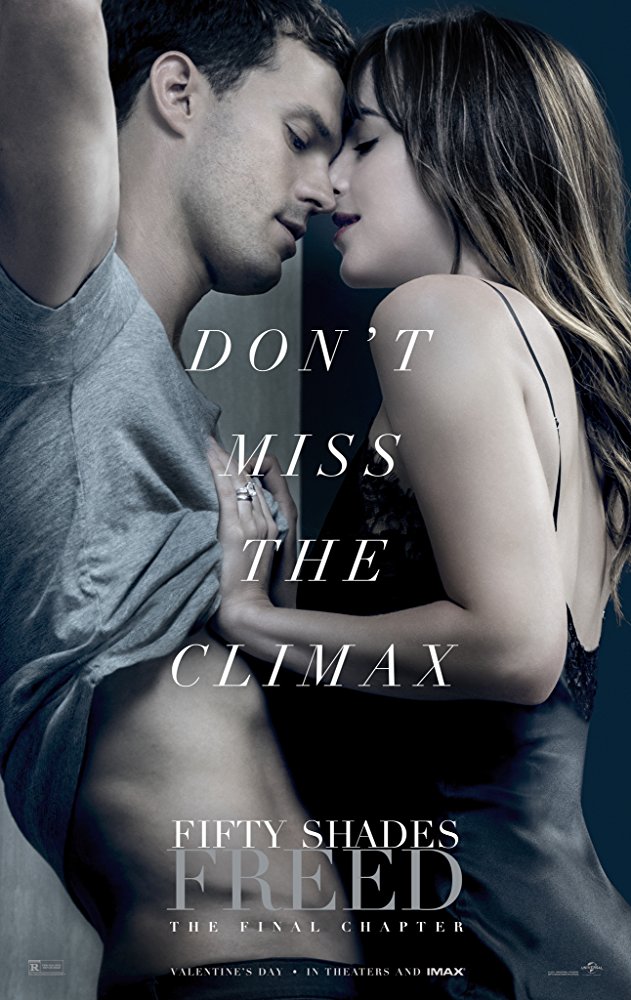 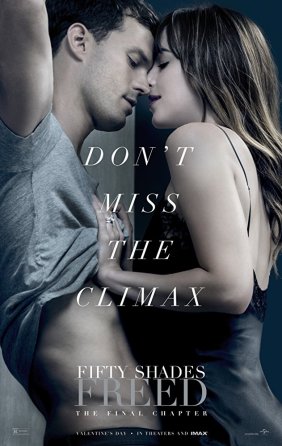 As the 50 Shades Trilogy comes to its climactic end…it seems that Christian Grey (Jamie Dornan) has not only swept Ms. Anastasia Steele (Dakota Johnson) off her feet, and into his bed, but he has finally taken her “off the market” too.

As the newlyweds settle into married life, continuing to fulfill one another’s extreme sexual desires, it seems that total creeper from the past Jack Hyde (Eric Johnson) isn’t quite through with Anastasia yet.

But when things with Hyde, and in married life, get a lot more intense than Christian or Anastasia had ever expected, the hopes for “happily ever after” may not be as easy a road as either of them had anticipated…

I give 50 Shades FREED a rating of WAIT AND CATCH THIS FILM ON NETFLIX OR STREAMING:  Okay, now I know that everyone out there who has read this trilogy and viewed the first two films on the big screen, is running out to catch this film this weekend the exact same way.  And many a lover is out there, hoping that sitting through this film with their significant other, is going to secure them great hope with “getting lucky” too!  But, even with all that said…it’s hard to imagine that this final film could be even worse than its predecessors, but it’s TRUE!!  Between Johnson’s acting getting worse, not better, throughout each of these films, and the once again less-than-passionate sex scenes taking their toll, I would say this Fifty Shades is by far, the worst of them all.  Yes, you heard that right!  Even with the continuation of the S & M being portrayed throughout, and the fact that they do manage to obtain their “Storybook ending”, I am happy to be FREED from watching anymore of these lack luster films, which have not come close to the passionate filled masterpieces they are based off of by E. L. James.  I truly feel that these films could have been so much more with a pair of actors whose chemistry together was off the charts, as I have stated before in my reviews of these films, and now, after viewing FREED on the big screen, I’m sure of it!  I just so wish we could have scored a cozier pair of stars to portray this passionate and lustful filled love affair on screen, because I was once again not enamored with what was playing out on screen.  I mean, I would rather view MR. & MRS SMITH, or THE LIGHT BETWEEN OCEANS, over and over, as you can feel the passion and Brad and Angelina, or Michael and Alicia, as they fall head over heels in love on screen, as it translates to a lot more excitement than any of the 50 Shades films have ever portrayed, all along the way…