REVIEW of MOLLY’S GAME – Kathy vs. TK’s thoughts on the film… 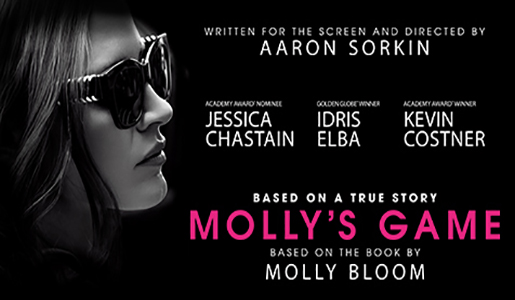 Based on the book by the “Poker Princess” Molly Bloom herself, and Written and Directed for the big screen by Aaron Sorkin, we enter into the early life of Miss Molly (Jessica Chastain) …striving to be an Olympic skier, while wanting desperately to please her demanding father Larry Bloom (Kevin Costner).

When Molly decides to venture out into the world, prior to Law school, she finds herself exposed to the life of high-stakes poker, where only the rich and famous are privy to play this in these card games…

As Molly is a quick learner, in life, and what it takes to make bank setting up these type of poker games, she soon finds herself wanted by the FBI, for her handling of these games of chance.  Forced to secure a lawyer to help save her tushie from the feds, she convinces Charlie Jaffey (Idris Elba), to take on her case…because it seems Molly’s supposed “rake” from the games has drawn suspicion to these games…along with the Russian’s who she has allowed to sit at her table…

I give MOLLY’s GAME a rating between MUST SEE ON THE BIG SCREEN and WAIT AND CATCH THIS FILM ON DVD:  Chastain is totally in her element, playing the very beautiful and very smart, Olympic skier turned “Poker Princess” Molly Bloom.  Elba is equally as powerful as Lawyer Charlie Jaffey, drawn by Molly’s story and circumstance, to take on her case.  And although Costner’s role is quite small from his usual leading man roles, playing Bloom’s father seemed quite effortless for him as well.  Sorkin’s eye for storytelling is apparent here as well, as we learn the behind the scenes storyline from Molly herself J  If you love poker, beautiful women, and are intrigued by a world where lots of money vanishes without even a whimper from the looser, then go catch MOLLY’s game this weekend at a theater near you.  But, if you haven’t been moved to rush out the theater and catch Chastain and Elba in action by this review, then you’ll be perfectly content waiting to catch MOLLY’s GAME on your small screen at home, once it hits on DVD!

This humble opinion is brought to by T. K. Edwards

Based on the true story of Olympic skier Molly Bloom hosting the world’s most exclusive poker games and the aftermath that followed.

BELOW MAY CONTAIN SPOILERS…CONTINUE READING AT OWN RISK

I have always been an Aaron Sorkin fan.  I love and own almost every movie he has written from A Few Good Men (“YOU CAN’T HANDLE THE TRUTH!!!…sorry i had to do it), to Charlie Wilson’s War (Philip Seymour Hoffman was terrific in this), to the Social Network (all hail David Fincher!), Moneyball (I can literally watch this at anytime…anywhere), Steve Jobs (I like sugar water), and even to the very unknown, like his movie Malice (starring Alec Baldwin during his peak).  The way he writes is so rhythmic, fluid and unique.  It’s almost like it’s another language from some far off undiscovered country that has a population of just one man and that man is a writer named Aaron Sorkin.  Sorry, I need to calm down this not a job interview.  He’s not standing behind me, I promise.  But if he were I would tell him that Molly’s Game was just as good, if not better than some of the above mentioned films.  And I think that’s because he made his directorial debut with Molly’s Game.  No one knows how to tell someone to say the lines that Aaron Sorkin wrote better than…well…Aaron Sorkin.  How many times am I going to say his name?  Sorry, I won’t say his name again.  LOL.  From the moment the movie begins, you are hooked and don’t even realize it.  Most first time directors fill their movies with loads of cliche camera angles that take away from the story.  And at first I thought Molly’s Game was going to be just like all of those first time films, but Aaron Sorkin (last one I promise) doesn’t do that.  What he does do, is an amazing job of making the scenes of the movie shoot around his written words.  You can tell he is in control of this film and his actors.

Now, on to our players…
Jessica Chastain is our star of this Rounders epic and she is terrific.  You can tell she understood the material very well and completely fell into character.  She portrays Molly Bloom as a smart, sexy, confident woman to a “T” and deserves all the credit for this movie being a success.  This brings me to Luther himself…Idris Elba.  I love watching Idris, he’s by far one of my favorite actors working today.  He plays Chastain’s lawyer in Molly’s Game who is confident, intelligent, passionate, and at times very funny.  Perfect casting!  Btw, Superman’s dad, Kevin Costner is in this too.  He is only in a few scenes, but Costner also brought his “A” game and does a great job too.  All in all, Molly’s Gamewas a great film.  I highly recommend you go to the theater and see this one.  It’s definitely worth your money.  Until next time, thanks for reading.  Aaron Sorkin…LMAO