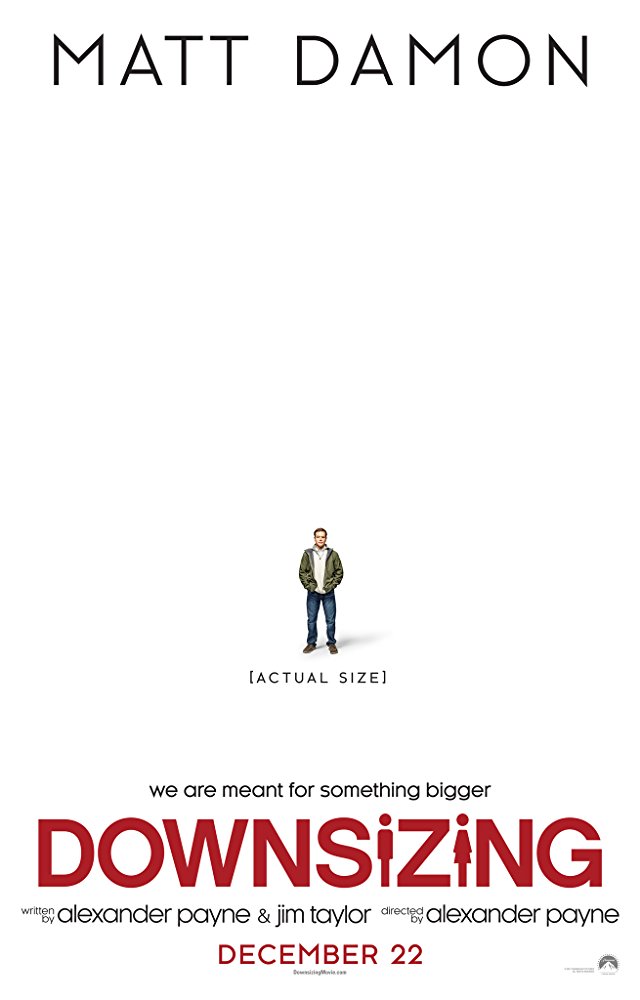 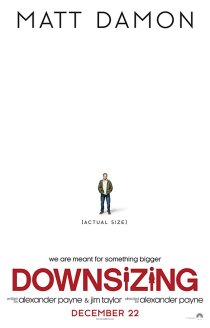 Writer and Director Alexander Payne is taking us down a satirical path of no return, as we meet the ever vigilant and very green minded Paul Safranek (Matt Damon).

When the technology is developed that can make us all just a smaller version of ourselves, thus allowing us to take up less space in our ever-changing, and ever shrinking world…Paul convinces his wife Audrey (Kristen Wiig) to join him on his quest, to live a quite smaller life.

Now, living in a specially designed “small people” neighborhood, Paul finds that becoming small may not have been his best decision… as he forced to come to terms with living without his wife, while forging new friendships with fellow littles Dusan Mirkovic (Christoph Waltz) and amputee Ngoc Lan Tran (Hong Chau), trying to make sense of what this new existence truly means…

I give DOWNSIZING a rating of WAIT AND CATCH THIS FILM ON DVD or NETFLIX:  I almost always enjoy Matt Damon’s films, but this little “Honey I Shrunk the Adultsesque” storyline was just a little to ho hum for me.  I have really enjoyed Waltz on his previous roles, but this particular character and his interaction with Damon was rather blasé’ as well.  And Wiig’s role is so small, even her usual funniness isn’t given enough material to shine through.  But, on a small positive note, I was extremely entertained by Chau’s performance, and her role was the only one that truly pulled at my emotions throughout this film.  Suffice to say that DOWNSIZING isn’t as bad as some of the films I’ve seen this year, but it’s clearly not one of the best films I’ve seen either, thus leading me to suggest that you wait and catch this film on DVD or NETFLIX when it’s distributed, because as engaging as it seems it might be from the trailer, it’s not near as good as I was expecting from Payne, having thoroughly enjoyed his previous films ~ SIDEWAYS, THE DESCENDENTS and most of all NEBRASKA.