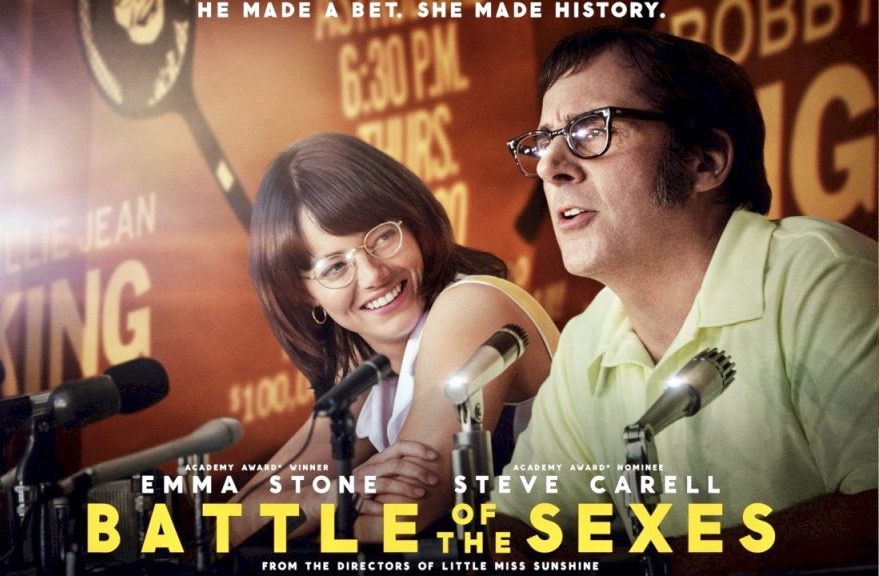 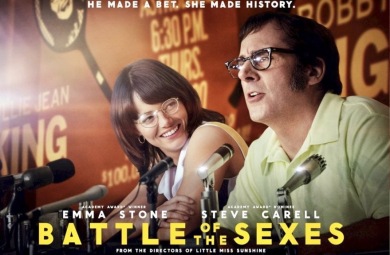 Dynamic creative and directing duo Jonathan Dayton and Valerie Faris (LITTLE MISS SUNSHINE, RUBY SPARKS (movies) SMASHING PUMPKINS, RED HOT CHILI PEPPERS (movie videos) take on the Tennis battle of the ages and bring it to the big screen – THIS IS BATTLE OF THE SEXES!

Ranked the #1 seed in Woman’s tennis in 1973 – Billie Jean King (Emma Stone) is making her waves felt in the tennis world, both on and off the court. With her hubby Larry King (Austin Stowell) as her biggest supporter, Billie Jean takes on the establishment, and Tennis Association Chairman Jack Kramer (Bill Pullman), pushing for equal pay between the sexes.

Enter the absolute showman and MSP (Male Chauvinist Pig) of the world, former Wimbledon and US National Champion Bobby Riggs (Steve Carell), who challenges Billy Jean to play him in a “Battle of the Sexes” match, proving once and for all, Men are superior athletes.

Declining his suggestion at first, King soon finds herself lost in a midst of mayhem when fellow women’s tennis professional Margaret Court (Jessica McNamee) accepts Bobby’s challenge, and looses to him.

Now with the pressure of the world, and women’s tennis on her shoulders…King agrees to accept Riggs crazy notion of MAN vs. WOMAN on the tennis court, in public opinion, and on the televised world-stage too…as she proves that sex has nothing to do with what makes a CHAMPION in the world tennis…once and for all…

I rate BATTLE OF THE SEXES a MUST SEE ON THE BIG SCREEN: Having viewed this actual “Battle” many years ago and the ripe old age of 9, I was anxious to see if Stone and Carell could take on these bigger than life characters, and take them on, they did!! Stone is exceptional as the tennis player and feminist, Billy Jean King, as I think another nod during awards season is a few months is coming her way for her performance. And who could play the chauvinistic, arrogant showman Riggs any better than Carell? No one…as his performance is top notch too! I was even blown away by the storyline of this film, which delves into the personal lives of King and Carell as well, bringing to light the struggles they both faced not only professionally, but personally as well. The most amazing part for me experiencing this film in 2017, was the fact that even though woman have made significant strides in the world of sports, and business, in achieving equal pay since 1973, for many of us, this struggle still remains – equal pay for our position, regardless of our sex…some 44 years later, which is truly sad when you think about it…but, even with that notion shared, I think that whether or not you love tennis, love the thrill of competition, or are just a fan of Stone and Carell’s previous work…you have to catch BATTLE OF THE SEXES on THE BIG SCREEN at a theater near you this weekend… as the thrill and struggle is as real as it was – back in the day…