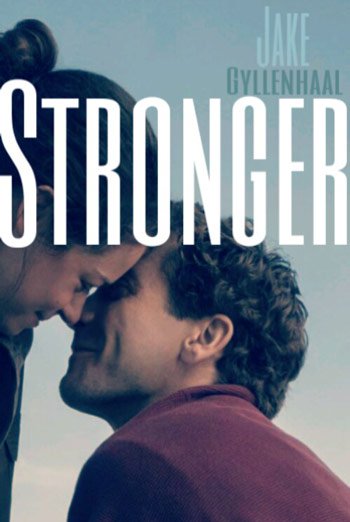 “STRONGER is a real-life drama that must be experienced ON THE BIG SCREEN, at a theater near you!” – Kathy Kaiser – Matinee Chat

Based on the book STRONGER, by Jeff Bauman and Bret Witter, and brought to the big screen by Director David Gordon Green (PINEAPPLE EXPRESS, JOE), we meet Cosco working and day-drinking nice guy Jeff Bauman (Jake Gyllenhaal), working on a way to get back with his ex-friend Erin (Tatiana Maslany).

When Erin shares with Jeff that she is about to enter the Boston Marathon, Jeff knows just what to do…as he heads home to prepare to knock her socks off, when he finally does the right thing…and meets her at the race…

As Erin reaches the finish line, all hell has broken loose, and the two bombers have struck the race, leaving many injured or dead in the aftermath, including Jeff.

With the grace of God, and a guardian angel named Carlos (Carlos Sanz) nearby…Jeff finds himself in the hospital and alive, but facing the reality that both of his legs were blown off in the blast.

When Jeff finally comes too, and faces his new circumstances, he realizes that he can identify one of the bombers, putting law enforcement on the right path.

Hailed a hero by many for his bravery and the information that he has shared, leading law enforcement to catch the bombers, Jeff is caught in a world of accolades and torment, trying to come to terms with all the fame he didn’t ask for, and the long road he is facing, learning how to walk again…

I give STRONGER a rating of MUST SEE ON THE BIG SCREEN! Gyllenhaal is absolutely incredible, playing real-life survivor of the Boston Marathon Bombing, Jeff Bauman. As performances go this year, I’m sure Gyllenhaal will be facing a Golden Globe and/or Oscar nod for his excruciatingly painful, yet wonderfully enlightening performance in this film. Malany is spectacular too, as his on again, off again girlfriend Erin. And Miranda Richardson is perfectly cast too, as Jeff’s mother, who is reveling in all the publicity that her son is getting, as it brings a sense of validation to her otherwise mundane and ordinary life. This true-life drama is an emotional roller coaster that you have to experience on a BIG SCREEN near you. Touching and inspirational, STRONGER is even more enjoyable than 2016’s PATRIOT’S DAY~ as this film focuses on the human spirit, while not giving a voice to the terrorists that sought to destroy American lives with their heinous act on April 15, 2013.