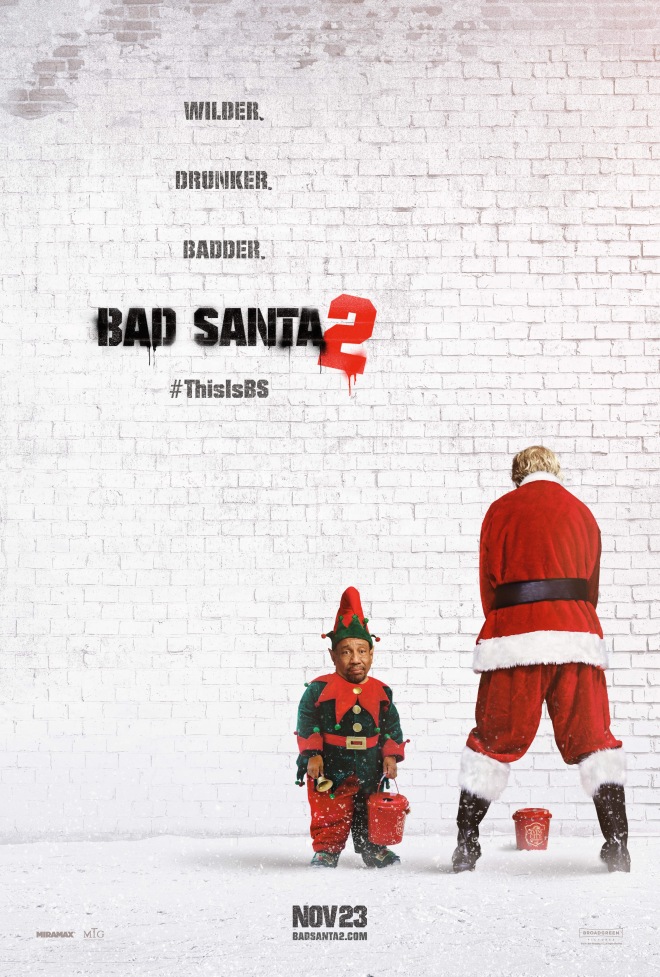 Desperate for a new life, and a new gig, Willie Soke (Billy Bob Thornton) throws caution to the wind, and convinces himself to take on another caper with his old friend Marcus (Tony Cox), yet again.

Living the life of Santa apparently has its perks, like getting near the beautiful redhead Diane Hastings (Christina Hendricks), as Willie ‘s hoping to spice up his life with the goddess of twerks this time too!

But then what to Willie’s eyes should appear, but his wicked mother Sunny (Kathy Bates), who is part of Marcus’s plan – Now what’s a guy to do, as he hates this poisoned bitch so much !

But with their butts on the line ~ and their pockets still bare ~ Willie and Marcus must find a way to relieve all their despair, so they join forces with Sunny hoping to make loads of cash, but when it’s all said and done, who will be left holding the bag???

I give BAD SANTA 2 a rating of WAIT AND CATCH THIS FILM ON DVD or NETFLIX: Okay, now I have to admit right away, that this film ended up being funnier than I thought it would be going in. And they tried very hard to make it as appealing as the 1st, with its multitude of one-liners, and their dark and disturbing humor. And know too, that all of the guys around me enjoyed this film much more than I did, from the start ~ It’s a Dude Flick for sure ~ so take that into consideration before you head out. But is it worth the price of admission to see it on the big screen? Not sold on that I shall share, as it played out just as I anticipated from the trailers out there. If you enjoyed seeing BAD SANTA, then please head on out, as you won’t mind dropping your dollars for this raunchy holiday bout! But, if you aren’t feeling so keen on what you’ve seen of BAD SANTA 2 so far, then know your thoughts are right on the money ~ so go ahead and save it and catch this film in a few weeks, in your quaint little home-ey!