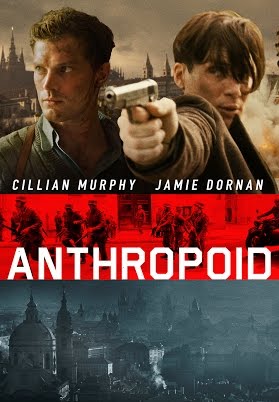 From Writer and Director Sean Ellis comes the incredible real-life story of documented WWII Mission OPERATION ANTHROPOID ~ and it’s plan to remove the Nazi’s 3rd in command – SS General Reinhard Heydrich from this earth…THIS IS ANTRHOPOID!!!

As General Heydrich. a.k.a. “The Butcher of Prague” follows Hitler’s orders to continue his reign of terror in order to fully occupy Czechoslovakia during the 2nd World War, the Czech people are grasping at straws for a way to stop this invasion.

When Czech Soldier Josef Gabcik (Cillian Murphy) and Slovakian Soldier Jan Kubris (Jamie Dornan) parachute in behind enemy lines, little do they know that their contact that was to aid them in completion of their mission, has been killed.

Forced to blend in with the assistance of a secured host family – the Moravecs – Gabcik and Kubris do their best to gain information about the whereabouts of Gen. Heydrich, so they can complete their mission. As the days turn into weeks, Gabcik and Kubris begin to fall for their beautiful and trustworthy accomplices, Lena Fafkova (Anna Geislerová) and Marie Kovárníková (Charlotte LeBon).

When Gabrik and Kubris fail to execute their mission as planned, they are forced to seek refuge in a secure location, alas with additional soldiers, that they didn’t know were held up, till that moment …but now, as the German’s know of their plot, and their location too, these brave and courageous men are about to enter the battle of their lives…

I give ANTHROPOID a rating of MUST SEE ON THE BIG SCREEN ~ As historical films go, this one seems to be better than most in the accuracy of what went on during the dark hours these soldiers endured at the hands of the Nazi’s. It was also amazing that I became so enthralled in this storyline, and throughout the entire film, as I usually don’t prefer to view war films if I can avoid it. Murphy’s performance was exceptional, Le Bon and Geislerova’s were too, and Dornan literally blew me away with his incredible, Oscar worthy performance as Kubris, as apparently, given the right material, he can act way beyond what we have seen from him before. This film is so intense, so gritty, so emotionally draining, that I found myself wanting it end, yet wanting to see more from all these men, as they never gave in to the fate they knew lay before them.