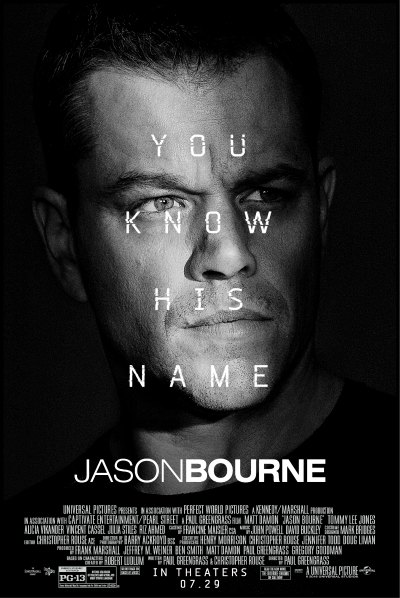 He’s BACK … and so is Director and Writer Paul Greengrass too – As we venture back in time to get a few questions answered in this 5th installment, and get ready for more fun in the future too…THIS IS JASON BOURNE!

Still on the run, Jason Bourne (Matt Damon) is being summoned by Fellow CIA Agent, psychologist and friend Nicolette “Nicky” Parsons (Julie Stiles), as she has come across some vital information from his past, that she must share with him…

Of course, still on his trail too is the CIA, headed by Director Robert Dewey (Tommy Lee Jones), fellow agent Heather Lee (Alicia Vikander), and ASSET (Vinent Cassel), as they all come up with different plans to bring Bourne in.

When things don’t go as planned in any direction – surprise, surprise J – and as more information about Bourne’s past is exposed, it is up to Jason Bourne to take matters into his own hands, as he tries to end all this craziness once and for all…

I give JASON BOURNE a rating of MUST SEE ON THE BIG SCREEN ~ usually by the time we are 5 films into a franchise, the storyline and antics are just getting stale, but not with JASON BOURNE!!! From the back-story, to the intense action sequences, to the best chase scene I have seen in a really long time – this film turned out to be unexpectedly intense and gratifying to view! Astoundingly too in this process, was the fact that even with his limited dialogue – Damom is BACK and BIGGER THAN LIFE reprising his role as Bourne! And even though one of his own meets their demise this time around, they unbelievably have set things up for BOURNE to rise yet again, extinguishing the thought that this would be the end for our CIA agent gone rouge, as he is so going to be back on the big screen by decades end – and in fine form too 😉