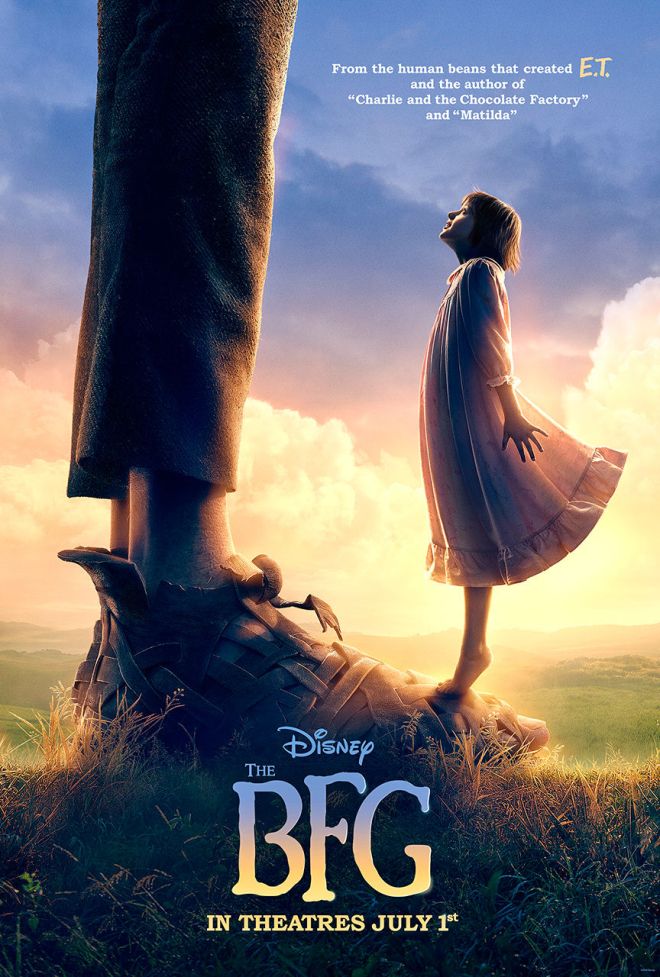 Based on the book by English Author Roald Dahl – the man who brought us many a scrumpdillyicious story including WILLIE WONKA AND THE CHOCOLATE FACTORY, MATILDA and JAMES AND THE GIANT PEACH, we venture into the life of orphan Sophie (Ruby Barnhill) who is up at all times of the night, unable to sleep because of what all happens at the “bewitching hour” of 3 a.m.

When she happens upon a rather large creature outside her bedroom window one night, and he spots her too, THE BFG – Big Friendly Giant (Mark Rylance) has no choice but to snatch this rather small creature from her perch, and take her back home with him.

Although BFG and Sophie become fast friends, it seems that the even larger giants who live in BFG’s part of the world, like nothing more than to have little humans for lunch or dinner!

As BFG and Sophie try to figure out what is the best course of action for both of them in this crazy, mixed up world in which they frolic, it looks like it is going to take someone even more powerful than they are, to take care of all those nasty giants, and to make our world a better place for everyone in the end…

I give THE BFG a rating between MUST SEE ON THE BIG SCREEN AND WAIT AND CATCH THIS ONE ON DVD ~ I know, your thinking. “Is she really telling us that we might not want to run out the theater to catch Spielberg’s latest creation?” And, yes, that is exactly what I am telling you!! Even though parts of this film are very endearing and charming, and Rylance’s voice is perfect as the BIG FRIENDLY GIANT too, the first hour of this film almost had me nodding off, as it is super slow and not exciting at all to say the least. Luckily though, the second hour was much more watch-worthy, as it is full of excitement, endearing storyline, and plenty of twists and turns, which is what I was hoping the whole film would be going in. Since I had mixed feelings throughout my viewing on this one, I reached out to a young man and his friends and family as I left the screening, as he shared with me that he had read the book. I asked them all to share their take with me on this classic tale ~ and the response from all the youngsters was – “It was funny”, and “they really enjoyed it”. But, they also shared that “parts of it was were hard for them to follow, as they didn’t understand all of what the giant was trying to say…” and “It was hard for them to follow along with the storyline too”, as apparently Spielberg and writer Melissa Mathison took a few liberties with how this version of the story unfolds, rearranging quite a few of the sequences from Dahl’s original story. Which leads me to share that if your kiddos have been talking about how much they want to see this film for weeks now, then by all means, head out this weekend to a theater near you and check out THE BFG. But remember I shared too, that the beginning was quite a snoozer this time for me, so if you feel the same way once you view it, just remember that I warned you about that little situation too 😉