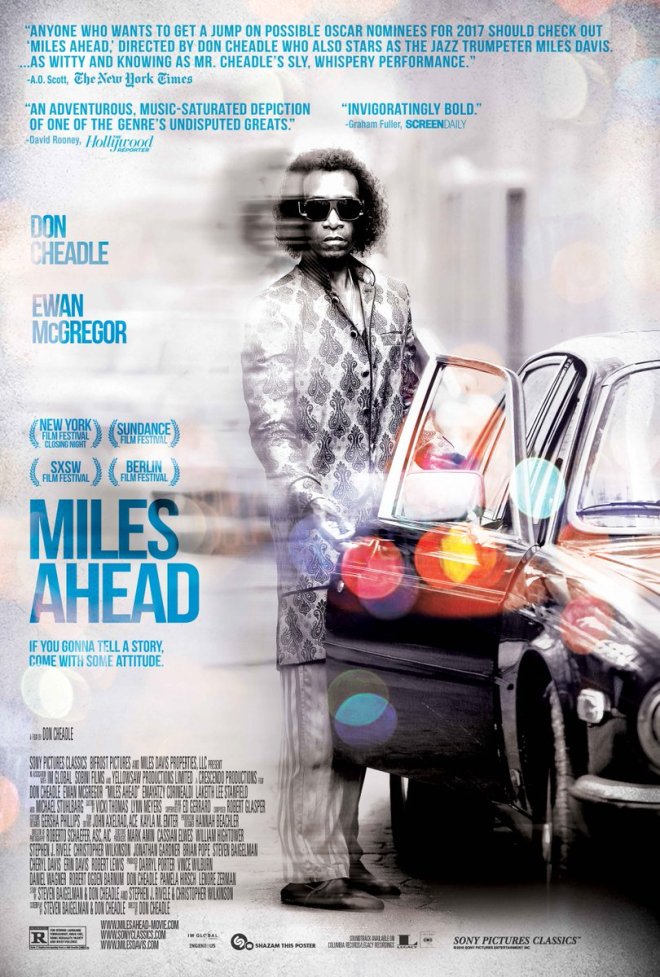 “Don’t call it JAZZ man, that’s a made up word. This is SOCIAL MUSIC!”

I’m always impressed when creative people venture into uncharted territory to bring a project they feel passionate about TO LIFE…Enter Don Cheadle ~ the co-writer, director and star of the much anticipated Miles Davis masterpiece, MILES AHEAD.

As we meet the talented Jazz trumpeter Miles Davis (Don Cheadle) – his career is waning, but his creative juices are still flowing strong.

When Rolling Stone reporter Dave Brill (Ewan McGregor) shows up on Davis’s doorstep with the idea of sharing Miles’ comeback story with the world – Davis decides that he, and only he, will decide when the world will hear his story and his musical genius too.

As his record company takes the position that they rightfully own any material Davis has written and performed, they feel that acquiring the masters work is a definite, and the sooner, the better.

Destined to retrieve his stolen work, Davis and Brill set out to get Davis’s new tracks back, and they will do anything to make sure that it happens, regardless of how ugly it might get…

I give MILES AHEAD a rating of MUST SEE ON THE BIG SCREEN ~ Cheadle is absolutely incredible as the extremely talented Davis. From his looks, to his mannerisms, to his trumpet playing, Cheadle doesn’t miss a beat in bringing Davis and his music to life. McGregor’s performance is powerful too, playing the reporter on a mission…when a friendship ensues. And talk about a fast paced film, every minute of this film’s 140 minutes seemed to seamlessly fly by.

So, if you love Jazz, or biographical material, or just want to catch Cheadle in a roll he was destined to play, then head out to a theater of your choice this weekend and catch the much-anticipated MILES AHEAD. It’s one of those films that is destined to find its place in your heart, and soul…