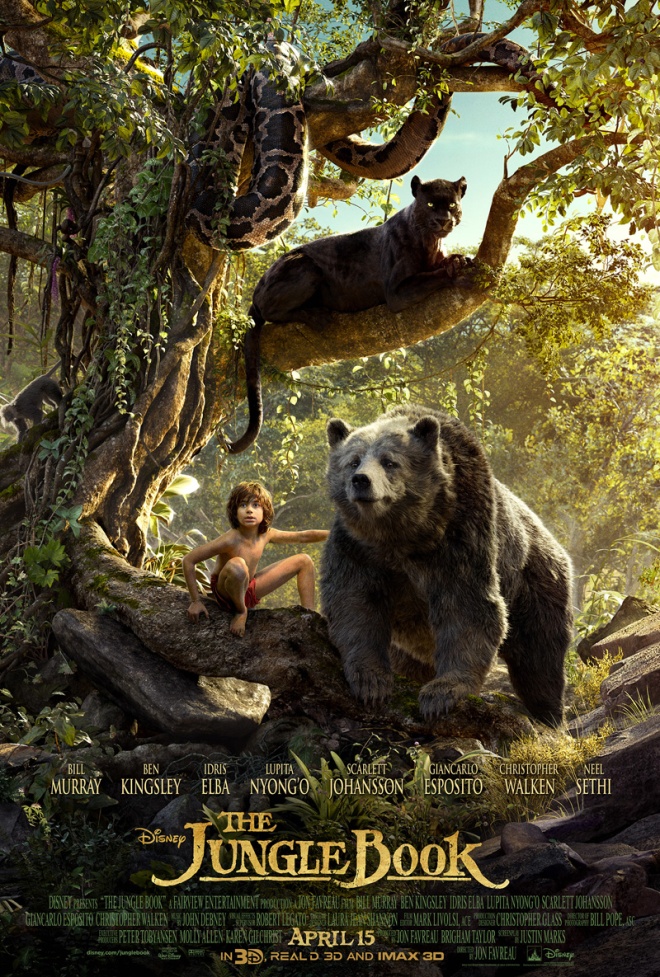 Torn from the pages of Rudyard Kipling’s novel and the screenplay by Justin Marks, Director Jon Favreau takes the classic DISNEY ANIMATED FILM we grew up with and truly BRINGS IT TO LIFE ~ THIS IS THE JUNGLE BOOK!

Making his way in the jungle as part of the wolf pack that has raised him, we meet the incredibly skilled and agile man-cub Mowgli (Neel Sethi), and his best friend and mentor Bagheera (Ben Kingsley), who is once again teaching him the WAYS of THE JUNGLE!!

When predator-at-large Shere Khan (Idris Elba) shows up on the scene, it seems he has no use for a man-cub in his midst, and wants him DOA more than anything…

As Bagheera directs Mowgli in the direction of the man village for his safety, it seems that Shere Khan isn’t going to wait much longer till he rids the forest of this menace!!

Torn from Bagheera and lost it seems, Mowgli meets up with the fun loving and oh-so-hungry bear Baloo (Bill Murray) ~ who seems to have a job or two he needs Mowgli to do, and when he’s through, Baloo’s tummy will be happy, less grumbly and very full too!

With Shere Khan still on his tail, and Kaa (Scarlett Johannson) wanting to make a meal of him too…Mowgli is forced to face his destiny in this world, by leaning how to command the RED FLOWER, and fowling up King Louie’s (Christopher Walken) plan too.

I give THE JUNGLE BOOK a rating of MUST SEE ON THE BIG SCREEN AND IN IMAX 3D ~ Okay, I have to admit, I was nervous to see what Favreau did to one of my favorite childhood films, but, as remakes go – THE JUNGLE BOOK turned out to be absolutely SUPERB from beginning to end!! From the amazing cinematography with real-life animals, to the excellent casting of Neel Sethi as Mowgli – this film doesn’t miss a step in bringing this animated classic to life, and HOW!!! Favreau and his team definitely mastered that DISNEY MAGIC in the making of this film. I also want to share with all the parents out there too, that my 16 year old joined me to catch this beautifully done film, and even she jumped in places, as the REAL CREATURES told their plight, so you may want to let the little ones at home with grandma and grandpa, watching the animated version, which is so better suited for them. But, with that said, whether you are 6 or 96 – you have to head out to catch this one at a cinema near you, as it is definitely one that has to be viewed on A BIG SCREEN and in 3D too!!!