Military Bases in the U.S., Kuwait Get First Look at Sequel

Honoring U.S. troops and servicemen and women in each of the four branches of the military, the new movie London Has Fallen, the high-octane sequel to the box office smash hit Olympus Has Fallen, was screened at 18 different military bases Stateside, and one military base in Kuwait, this past weekend in advance of its nationwide theatrical release this Friday, March 4th. Three of the film’s stars each visited one of the U.S. bases to meet members of the armed forces and their families, and to present them with the new movie first.

Actor/producer Gerard Butler – who reprises his role of Secret Service agent Mike Banning in London Has Fallen – arrived at Oceanside, California’s Marine Corps Base Camp Pendleton on Friday, February 26th to meet marines and sailors, and screen the film. Mr. Butler accepted one female Marine’s invitation to accompany her to the upcoming Marine Corps Ball. 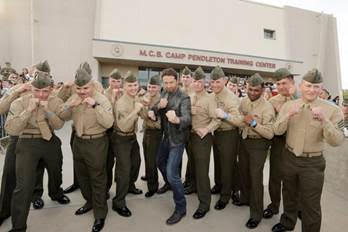 The following day, Saturday, February 27th, Lompoc, California’s Vandenberg Air Force Base hosted actor Aaron Eckhart – who reprises his role of U.S. President Benjamin Asher in London Has Fallen – who met with airmen and their families, and showed them the movie. Mr. Eckhart accepted induction into the Vandenberg Air Force Base Exchange Hall of Fame, receiving his Star on the Walk.

Also on Saturday, February 27th, actress Angela Bassett – who reprises her role of Secret Service Director Lynne Jacobs in London Has Fallen – visited Norfolk, Virginia’s Naval Amphibious Base Little Creek to meet naval officers and units, and give them an advance preview of the film. Ms. Bassett accepted over 200 mini-posters for her signature, and autographed them all. 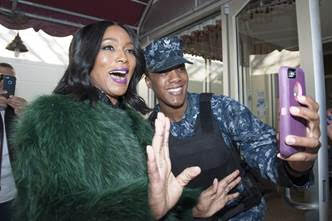 15 more bases were given special preview screenings of the movie. Extending the salute overseas on Saturday, February 27th, a screening of London Has Fallen was held for U.S. Army troops stationed at Camp Arifjan in Kuwait.

The non-stop, suspenseful action thriller also stars Olympus Has Fallen alumni Morgan Freeman as Allan Trumbull, now the Vice President. A Gramercy Pictures presentation in association with Millennium Films of a Millennium Films/G-BASE production, London Has Fallen is directed by Babak Najafi. The movie is MPAA-rated “R,” and will be released nationwide by Gramercy Pictures this Friday, March 4th.