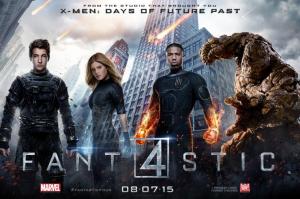 “It is our duty as human beings, to push forward into the unknown…”

Marvel is at it again – putting together a new team of SUPER HEROES as only they can… and taking us to the origins of where it all began…so buckle in tight, as your about to take one wicked hair-raising flight into another dimension, with the newest version of – FANTASTIC FOUR!

As we meet elementary school genius Reed Richards (Miles Teller), he is in the midst of building one heck of a science project, along side fellow classmate turned BFF Ben Grimm (Jamie Bell),

Flash forward to the perfection of their creation now being shown in high school, and even though their instructors aren’t too impressed, this project catches the eye of Dr. Franklin Storm (Reg E. Cathey) and his daughter Sue (Kate Mara). Dr. Storm is so impressed with Reed and what he has created, that he invites him to take part in working on a project they have been working on for quite some time, as Storm feels Reed is the missing link to finalizing their project…

Enraged by the fact that Reed has been brought into the midst of his project, Victor Von Doom / a.k.a. Dr. Doom (Toby Kebbell), is working tirelessly to show that he is the brains behind their alternative dimension relay transporter.

When Dr. Storm’s son Johnny (Michael B. Jordan) almost kills himself, Dad decides that the best place for him right now is to be working along side his sist6er and the other hand selected group of young scientists ~ even if he is just providing welding power instead of brain power. Now, with the team in place, it’s looks like it is only a matter of time before they are bringing to fruition the complex creation, that will forge it’s way into another dimension, way beyond our own existence….

I give FANTASTIC FOUR 3.25 out of 5 stars: Now in our third (or is the 4th installment – as much debate has been going on about an unreleased version of the FANTASTIC FOUR from 1994) – our “NEW TEAM” is taking us back to the beginning, and in a BIG WAY! I enjoyed learning the origins of this batch of MARVEL Superheroes, but it seemed that we spent so much time getting the back story, that by the time we reached the climax of this film, it came across as anti-climactic instead. Teller, Jordan, Mara and Bell’s chemistry together as the F4 was apparent throughout, and I enjoyed this conglomeration of actors much more than in either of the other films released, I just wish we could have seen them longer as their newly formed selves – guess that is why we are in the midst of making a new F4 set for a 2017 release date. My biggest drawback with this film was the way it seemed to drag on-and-on, making it feel a lot longer than it’s actual 100 minute run time. All in all – this film was more enjoyable than a lot of films I have sat through in the last few months, but sadly, it was just slightly about average compared to the other COMIC BOOK MARVEL creations we have seen throughout the last few years…